This summer we spent 5 days in Nebraska. I’ve apparently been in Nebraska before, as Eric insists that we drove through and even stayed in the state on our drive out from Michigan, but I have no memory of it.

One of our friends, Chris, grew up in Nebraska and his mother lives on 5 acres out somewhere in the middle. His family goes every year to visit and also for his boys to run around in the woods and creek and make things out of found objects, like time from summers past.  So different from city summers which are spent, for us, with pools and parks and the occasional camp.  We don’t have sheets of corrugated aluminum and bricks lying around our woodshed for kids to create forts out of.

So we piled into our minivan and headed East.  My two kids, his two kids, Eric, Chris, and myself.  Chris’ wife was off on a retreat and couldn’t join us. I’ve driven across areas of the Midwest before, once when crossing the continent to go from San Diego to Michigan, and once again when we drove from Michigan to Denver ten years ago. I’d just returned from a month in Ecuador and had missed the last 10 or so episodes of “24,” and a friend had taped them for me.  Every night when we decamped to a hotel, I’d pull out the VCR and watch a few episodes. I can get a little obsessed like that.

The most amazing thing about driving across the midwest to me has and still is the big sky. No buildings, no mountains, just sky as far as you can see in a 180 degree horizon. For miles and miles and miles. And grasses, and some trees, and then more of those.  I don’t know how the early pioneers didn’t get bored at some time.  Maybe that’s why so many of them stopped in Kansas or Nebraska when they headed out.  It was like, enough is enough.

We arrived in Franklin, Nebraska in the evening, and the kids immediatlely set out to finding random things in the yard and shed and began trying to make a tractor out of them.  At some point we heard a loud clanging and figured we should remove the large hammers from the play space, but otherwise let them play unhindered.

The next day we headed out to Red Cloud, Nebraska, to visit some of Chris’ other relatives.  His aunt used to be a teacher in a one-room school house and several years ago, her husband bought her an old one as a present and she had it refurbished and now gives tours. 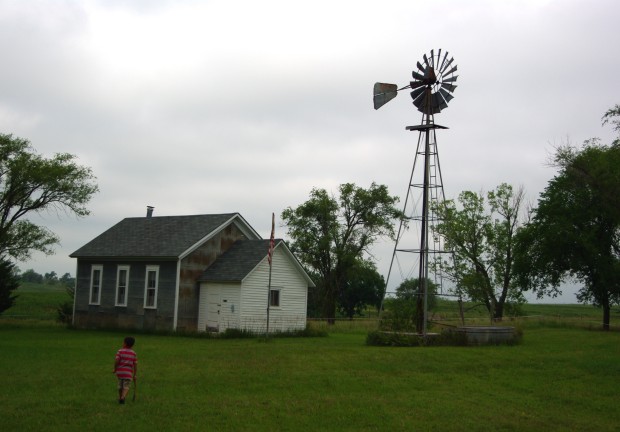 Her first order of action was to gather all the kids around the flagpole and ask them, “Do you know the Pledge of Alllegiance?” in a tone that one would use to ask something like, “Do you know how to walk?”  All four children looked at her blankly. “Don’t you say it before class?” she tried again.  Crickets. Utterly horrified at the state of education these days, she instructed the kids to put their hands over their hearts (which also wasn’t really done that successfuly) and led them in the chant. 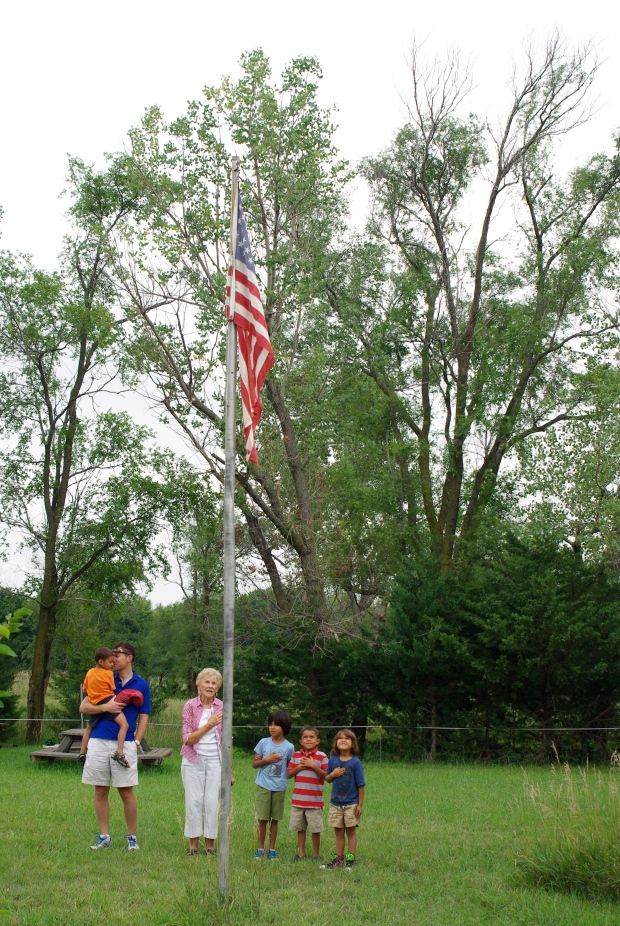 The siding is original and you can see the signatures and other writing on the  wall from times past.  I love seeing things like this when people try to say that kids used to be much better behaved-I mean, it’s just another version of graffiti, right?

Inside was the communal cups and washbasin (aka dysentery transmission module) and then the little classroom itself. It was remarkable to see something completely from another era and get a piece of life back then.

washbasin & cups for washing and drinking

Are you ready to recite?

We then went to the town center of Red Cloud  and did a tour given by the Willa Cather historical society, as it was her home and many of the characters in her books were based on real people and houses.  In preparation for the trip I had just read “My Antonia” and it was unbelievable to see places and houses that she described in the book.

We visited the old bank

inspection notices from the safe

and then her home. Eric commented that it’s a weird sort of hagiography to preserve living residences for people like authors, instead of knowing them through their work. I disagree-I think that seeing where someone lived and understanding their enviroment gives you a different perspective on their works, and helps you to picture who they were, where they came from, and what was happening in the books.

The day before and after this we actually just spent wandering around creeks and railroads and campfires and getting good and muddy, at least for the kids. 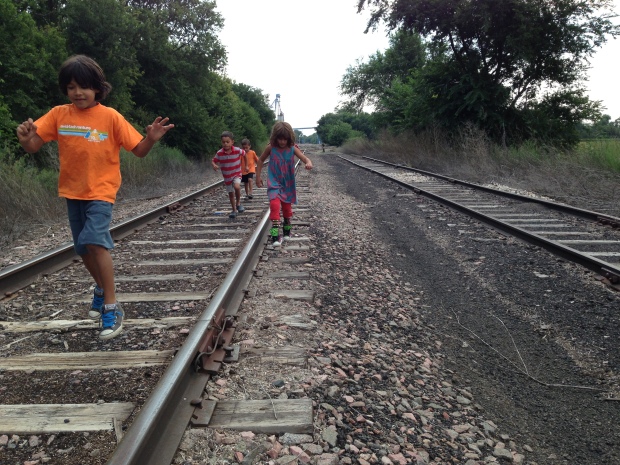 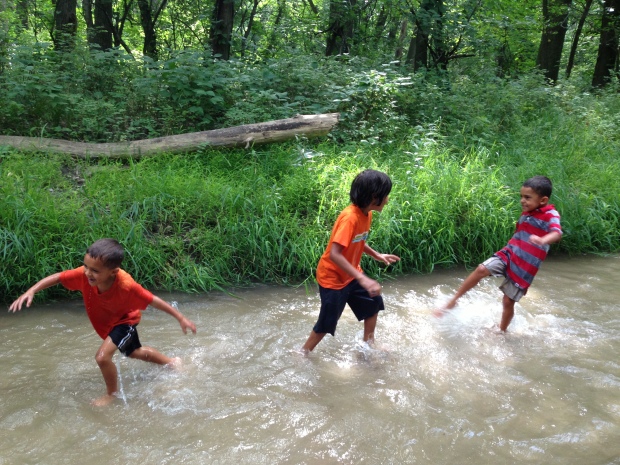 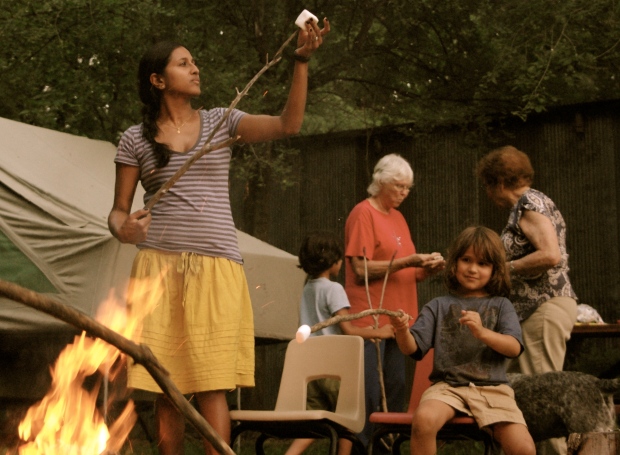 Saturday we headed for Omaha, given that the real reason that Eric was even excited about this trip was to see the Flaming Lips in Omaha. Something I’ve been thinking about ever since this trip is the experience of being brown in rural America.  These were small, small towns we were in.  Everyone knows everyone and if aren’t from there, regardless of skin color, people stare at you, as even Eric can attest to.  Somehow, though, it felt different for me-more aggressive, unfriendly, and unwelcoming.  (This excludes, of course, all the people in Chris’ family who we met who were just lovely, wonderful people. I’m just talking about walking around.) In Denver, especially near where we live, I’m pretty used to going to restaurants and being the only non-white people there. Something I didn’t appreciate before this trip, though, is that Denver is cosmopolitan enough that I’m not unusual, or at least no one seems to stare at me. It was so uncomfortable in small town Nebraska to just be walking around. Maybe I’m making this up, but I don’t think so.

The other thing that struck me was the food. Whenever we ate at home the food was delicious-Chris’ mom is a wonderful cook and eats very healthy and largely vegetarian, which was great. Anytime we went out though, the options were entirely cheese/fried/meat. Even the salads all had meat or cheese dripping on top of them.  The healthiest place we could find to eat out was Subway. When we finally got near Omaha, we found a little Vietnamese place that was utterly delicious and fresh and wow! a green vegetable. How can people eat healthy if there isn’t any way to do so?

At any rate, I never thought I’d be saying this, but it was a relief to get to Omaha and not feel like we were in a small town anymore. There is a weird inclusivity in being ignored, or at least not feeling like you’re an exotic zoo creature. We stayed with Chris’ cousin, Travis and his family, who were all wonderful people. I hope we get to spend time with them all again!

That night we went to the Maha festival at the Askarben amphitheatre.  “What is ‘Askarben’?” asked Eric at one point.  It’s written on everything, much the way that everything here is named, “Mile High” something or other. Travis looked at us and said, “Well, it’s ‘Nebraska’ spelled backwards!” and then started laughing at the ridiculousness of it.  I mean, really? Let’s not make this a nationwide trend.

The festival was great! I’m usually not a music festival type of person, but this was awesome. It’s not commercial at all, it’s entirely run by volunteers, they had tons of community involvement and other tents and such with displays. First up was Bob Mould, who Eric was excited to see as he knew Husker Dü, who I don’t know at all. Then he started playing all these songs I knew by Sugar! Took me back to the early 90s and listening to “Helpless” over and over again in my dorm room my freshman year at college. Then came Matt and Kim who played very little actual music but were so entertaining and fun that I was smiling the entire time.

Last, but most for Eric, was the Flaming Lips, who did their usual megalomaniac Flaming Lips show. Eric insists that plebians like myself “Just don’t get them,” and dear readers, I have to say that I’m fine with that. Just fine.

The next day was a long 7 hours home, listening to books in the car, playing games, giving into ipads, and finally getting back to Denver, where we were all happy to be home.