When our friends Sarah and Ben announced their engagement, I knew that I’d knit them a blanket.  I know I’ve said that I wouldn’t do it again, but I’d been wanting to make this pattern for some time and this was the perfect reason. 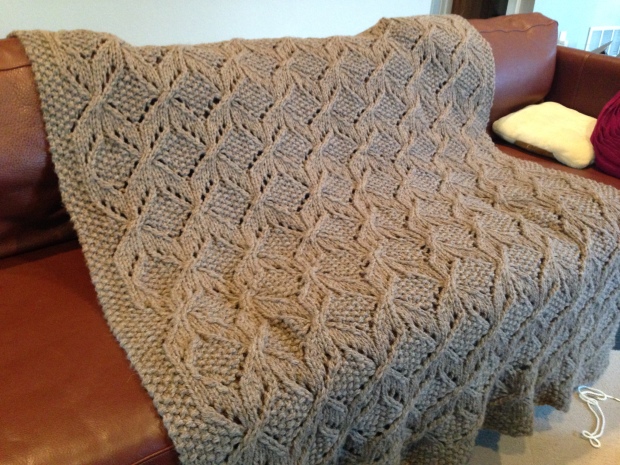 I LOVE this blanket.  It is soft and squishy and beautiful and snuggly. I chose a minimally processed undyed wool-I love that this is the color that it grows on the sheep. Something about that just feels organic.

Whenever I knit a large piece like this, especially one that is intended for gifting, I always think of the emotions and feelings and places that are knitted into the piece itself. This blanket travelled with me to New York and to the mountains. It has travelled by train, car, and plane.  I was at times happy while knitting it, sometimes loving, sometimes angry, sometimes weary, and sometimes sad.  I think that these are knitted into the fabric itself-and all are important especially for a blanket gifted for a wedding, or perhaps more importantly a marriage.

The lessons of knitting a large piece also lend itself to some other metaphors-there was a time when I found a minor error a few rows down, where I was able to fix it without having to unravel very much.  There was another time that I looked at the piece only to see that 10 rows back I had forgotten an entire row of cables. The only way to fix that was to unravel all those 10 rows and do it right. As in marriage, so goes knitting.

Knitterly details for the fiber artists among you-I found Flood’s instructions for cabling to be onerous, especially when using such a bulky wool. I switched to one of those U shaped cable needles instead and then would slip stitches from the front and back of it to my left hand needle when it came time to knit them. Blocking was also a bit treacherous-I tried to steam block as Flood recommends but my little puny iron didn’t even touch the fabric. So I nervously placed it in my front loader and ran it on soak for 5 minutes, then let it spin while I prayed it wouldn’t felt.  This enabled the stitches to really open up, and I’m so so glad I did it–it was 43×67 pre blocking and 52 x 65 after. And while the yarn was held double, it quickly got too tricky to hold two strands from two skeins, so I simply knit from the front and back ends of a center wound ball instead. 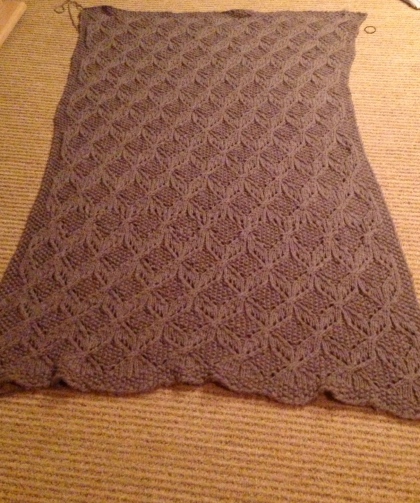 Pre blocking-43×67 and all squished up looking

I’ve also been doing a fair amount of cardmaking these days, so stitched up this card to accompany it. I really like stitched cards-it’s such a simple embellishment and it looks wonderful. 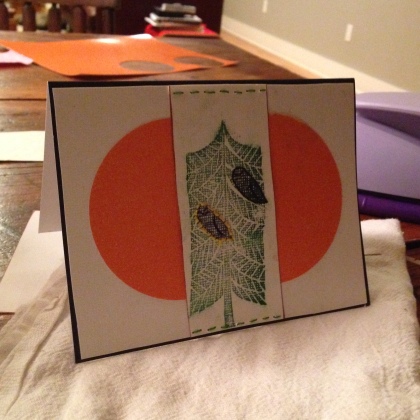 All wrapped up, with my new stamp labels to boot! 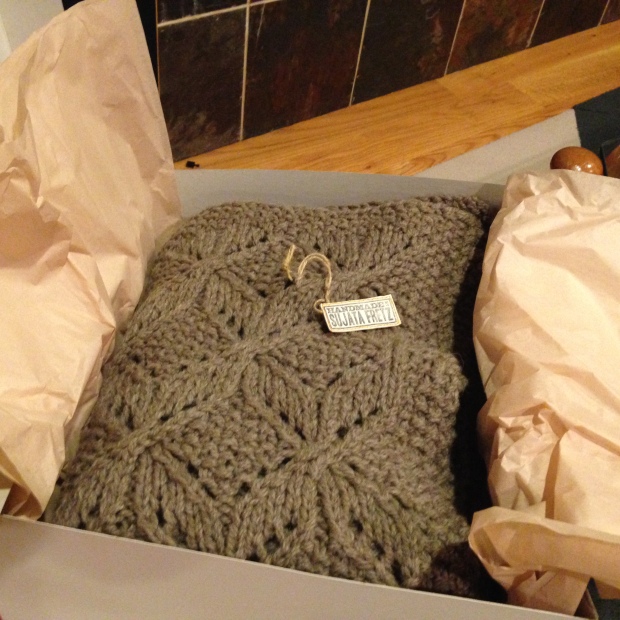 I hope that Sarah and Ben enjoy this blanket as much as I enjoyed making it! Lots and lots of happiness (and warm cozy nights) to them!