Today we went to the prison where the Khmer Rouge held prisoners and tortured the prisoners for information. Before I elaborate on that I should tell you some history. The way Khmer Rouge came to be was when the monarch went off on a trip to Russia. During the time that he was gone, military Leaders formed a coup. A coup is when a military overthrows a high ranking official, further more the coup was funded by the U.S.A. The funding money that the U.S.A. gave to the coup, thinking that they would use it to improve the city, but that was a bad move. All the coup did was give the money to the rich and keep it for themselves. Because of that the rich became richer and the poor became poorer. Some of the poorer farmers and peasants ran away into the Jungle and formed the group known as the Khmer Rouge. Soon the Khmer Rouge rose to power and overthrew the coup. During that time the Vietnam War was coming to an end. The Khmer Rouge had had a grip on Cambodia for four years, then they started going into Vietnamese territory and burning villages. Soon the well battle hardened Vietnamese solders completely destroyed the Khmer Rouge in two seconds. That is the end of the history lesson and onto my experience in the prison and Killing Fields.

The first place that we went to was the prison. This is the place where I felt that it was hardest for me. There were a few reasons that I think that I was so disturbed. One was because the guide’s mom had lived through the Khmer Rouge regime and the guide told us that before the regime, her family had 11 members and after the regime her family had four members left. Also the way they were treated was horrible. First, the prisoners were in the prison because the Khmer Rouge was growing more and more paranoid (this was before the Vietnamese came) and putting all sorts of people in the prison as “spies” : common people, other Khmer Rouge officers, rich people and learned people. Those were the reasons that they were there. The way they tortured them was terrible too. First the “cold group” came in and asked the prisoners to tell them that they were spies, and if you did not tell them, you would move on to the “hot group” and they would come and torture the prisoners. They asked NO questions. The torture included whipping them then pouring salt water on them or pulling of finger nails and putting alcohol on the wounds, etc.

The longest the prisoners stayed was six months. Six months of torture and then after the six months in prison they would be shipped off to the killing fields. The only reason you would stay six months was if the prisoner did not tell that he/she was a spy. If you told before that you would told that you would be taken to a new home. All that was crap and what they actually did was blindfold them and cart them off to the Killing Fields to be murdered. That in and of itself horrifies me – to lie to a person only to kill them. It disgusts me. The Khmer Rouge would also wipe out the whole family so that there would be noone to rebel. This included babies and kids too. Babies were taken forcefully from their mother and then killed by smashing them against a tree or throwing them up in the air and shooting them. Usually they killed prisoners in garish ways and without a bullet because back then bullets were expensive.

By the end of this I felt sickened and I hope that you tell other people about this horrific thing because they ought to know. 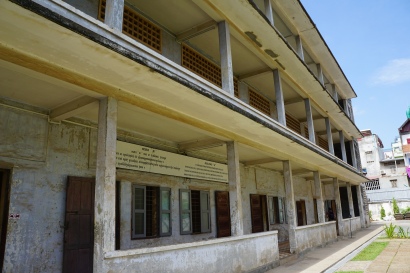 Teeny cell where prisoners were kept

Grounds of the Killing fields. The holes were sites of mass graves

8 thoughts on “The Killing Fields”