As an American, it is strange to be out of the country on September 11. At least in Japan, it’s just another day here. I didn’t see any mention of it on the papers as far as I could tell, and the only way that I knew of the date was through my Facebook feed where people were posting memories. Of course, it’s the same in America for events that happened in other countries – our collective consciousness of an event is generally limited to those which affected us directly.
Onto the day – the plan had been to go to the Harajuku area, walk around the Meiji shrine and gardens, see if we could see some funky dressed people, and perhaps rockabilly Japanese men dancing in Yoyogi park. A friend of ours had mentioned that Japanese baseball games are quite fun and there was a game that evening, so that was a possibility too.
The Meiji shrine is in the Harajuku area and has an imperial garden around it, lovely for a walk. The shrine itself is an active Shinto shrine and many Japanese people were buying blessings to be given, charms for various purposes. There was a wedding coming through too! I didn’t feel bad taking pictures because every single Japanese person was doing the same. Man, I wonder what kind of high society you have to be to get married at the Meiji Shrine. You’re not allowed to take pictures of the shrine itself, and people stand in front of it, ringing the bells and praying by bowing twice, clapping their hands together, praying, then repeating. Below is a picture of a wall of wishes that people leave to be blessed at the shrine. 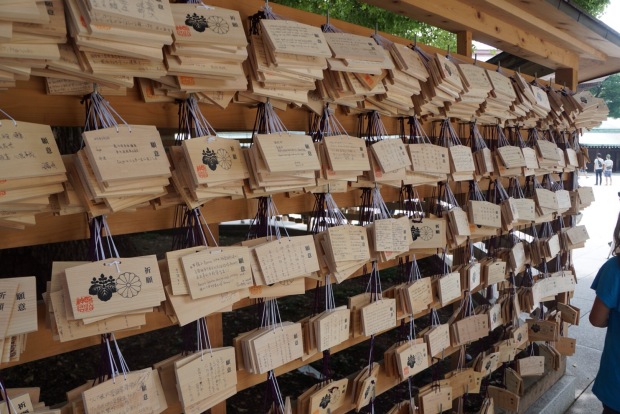 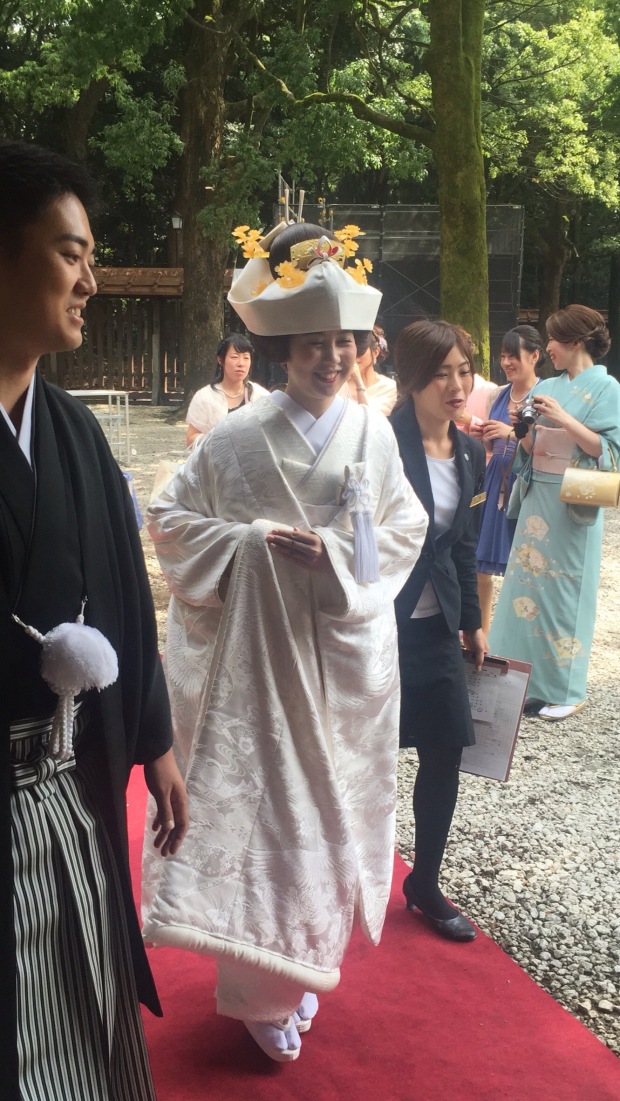 Lunch ended up being at a small curry shop – I’d heard about japanese curry, but truth be told it didn’t taste all that different to me from regular Indian curry, so perhaps we need to try it again.

We walked by the baseball stadium and got tickets for that evening’s game! Outfield, home team of course – the Tokyo Yakult Swallows! I mean, I’ve always been a HUGE Swallows fan. A little walk through the tony area of Harajuku and a stop at a big toystore called Kiddyland. The entire top floor is Hello Kitty swag, and the girl was silent for a few moments upon walking up. There’s some new bizarre Hello Kitty character that looks like an unhappy crumpled fried egg. There’s a TON of gear for this creature – I can’t tell if Sanrio is trying to push it or if it’s genuinely popular. She walked away with a rather nice hello kitty charm for her bracelet, after I convinced her that getting a 2 foot tall Hello Kitty dressed in kimono would not be practical for our trip.

We got to the famous street in Harajuku to see all the girls dressed up for the weekend, and found it full of…..tourists. Mostly poorly dressed tourists at that, or other normally dressed Japanese women in what seems to be the common Tokyo uniform of wide leg cropped pants, slightly oversized T-shirt, and short bright bobby socks worn with sandals. Trying to get through the street was reminiscent of watching nature videos of salmon swimming upstream.

We gave up and headed back to the stadium. Eric writes about the game in great detail here – I’ll add on that I had a lot of fun. The energy at the games is so different, and you ACTUALLY WATCH THE GAME. Every US game I’ve been to, I’m usually just drinking a beer and chatting with a friend and I only look up after the crowd starts cheering to say, “What? Did something happen?” I am not alone in this, I know.

That evening we went to a different, higher quality conveyor belt sushi. No screens this time, you order from an actual person. Much tastier and about the quality of sushi I feel like I get from the nice sushi place at home, but for a lot less – $70 total for the entire family. I ordered a tuna wasabi roll, and the waitress said “very spicy!” “Sure!” I said, ” I like spicy!” It arrived and I popped one in my mouth. A little hot, I thought to myself. The next second my nose and entire sinus passages were filled with a hot fire. My eyes began to water and I started coughing and waving my hands frantically in front of my face, as if I could waft away the feeling. I lunged for my sake and took a gulp. The tuna wasabi roll is tuna with actual wasabi plant in it, the size of a small chunk of cucumber. Holy god. The thing with wasabi spicy is that once it works its way through your entire body, it’s gone! Not like chili spice which keeps your tongue onfire for ages after. I kept eating them and repeating the above. The boy, seeing me, decided he had to try one. Here’s the result:

3 thoughts on “In which we visit a shinto shrine and later take 20.000 volts of wasabi straight to the nose ”