It’s our last few days here in Romania. We packed up all of our stuff we wanted shipped to Ireland, since we’re traveling for 2 weeks before we get there. It all fit into seven smallish boxes that we took to the one post office in town that handles international packages. To demonstrate our ridiculous helplessness at basic life skills here, we had four helpers to assist us mailing packages. Three of these were Eric’s delightful students here, and the fourth was Rob, who has become our guide here of “How to manage Romania as an American.” 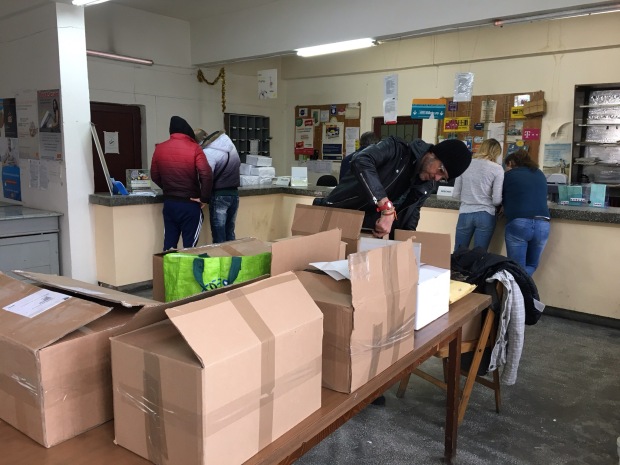 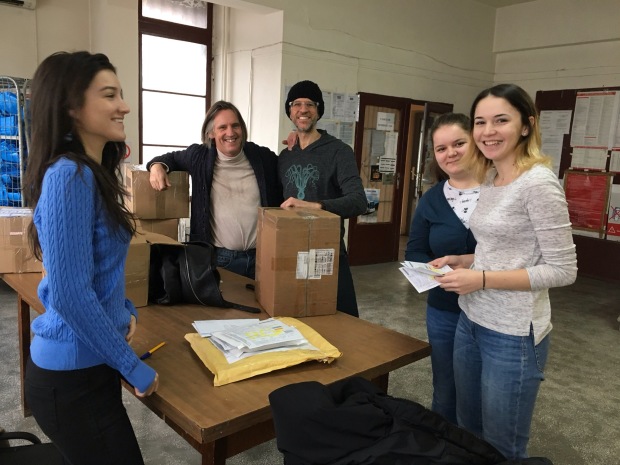 They led us through the process of filling paperwork, then giving it to the clerk to check before sealing packages, then weighing them, getting the paperwork stamped, putting the paperwork into little pouches and sticking those on the boxes. While this was happening I heard a sound that instantly took me back to childhood, a whirring, clicking, beeping noise. I followed the sound and it took me to…a DOT MATRIX PRINTER. I stared at the relic, remembering hours of lining up the dots, then carefully tearing the edges off at the perforations. 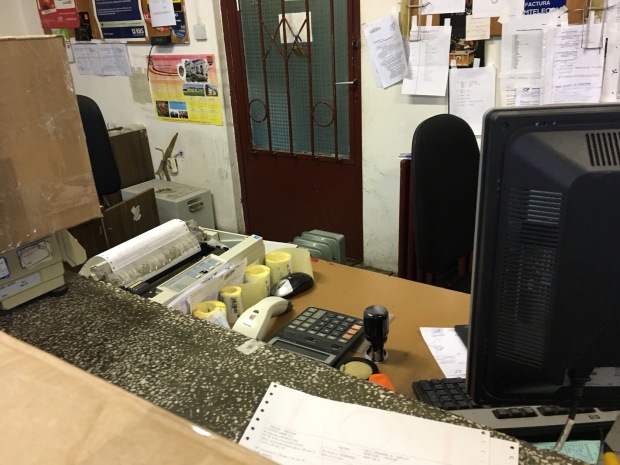 We followed with a lunch at a local restaurant, where we had lively discussions about the new Gilmore Girls revival, the Romanian job market, and how to steal cable.

It’s no secret I wasn’t all that excited about Romania when we first found out we were coming here. Romania? I thought, picturing dreary landscapes with concrete blocks for miles, lines to pick up milk and eggs, and scheduled power outages. People shuffling around despondently, grandmothers with scarves tied over their ears and men with cylindrical furry hats. And when we first got here, it seemed that this would indeed be the case.
But over time, as we learned the layout of the city, where to find things, how to do things, and I was able to let go of some of my own doubts and fears, it became increasingly warm to us. Unsurprisingly, people react to who they see, and the more open and friendly we were, the more we got in return.

We learned so much about the world of Communism and dictatorship, what that really felt like, and the lasting impact it still has here.

Things change when you are able to build community somewhere, which makes anywhere seem like home. I’ve had more lonely and dreary times in some of the world’s best cities than I’ve had here.

And I leave with a feeling of sadness that we’re not staying for longer to let that community grow, as it feels we’ve only just started. I’m sure we’ll find the same, and even more in Ireland as the kids will be in school and, well, we can speak the language.

Timisoara occupies a warm place in my heart, and I’m happy that we ended up here after all. Had we been in a more Westernized city, I don’t know that we would have been able to make the same connections that we did.

I’ll share one last story from Timisoara here, something that just wouldn’t have happened back home. The kids and I had gone to see Rogue One (excellent, btw) and hopped in a cab to take us to Viniloteca. Eric was working as assistant bartender for the night, and when we got there, he was flitting about from table to table with a frantic energy. I had run out of cash, so grabbed a 10 lei note from Eric, ran back out to pay the taxi and headed in. Lots of people were there for the amusement of watching Eric work, including many of his students. We chatted with some friends who were there, and I had a nice conversation about the differences in hospital organization with a young medical student. Eric asked me then to take pictures to document his night of servitude, and I reached in my pocket for my phone. It wasn’t there. I then searched my backpack, the kids’ pockets, and my pockets again, but to no avail.
I used Eric’s phone to track it, and saw that my phone was making its merry way around Timisoara, having some fun at the mall, then heading back to city center. Clearly, I had left it in the taxi. I rang the phone remotely, hoping the driver would find the phone and bring it back, and a few times the taxi did seem it was heading back my way, only to turn in a different direction. Emile, upon hearing my plight, tried to call the taxi company to see if they could track down the driver, but was told “this is not possible.” A few other people tried to call also with the same result. At one point I had a few people clustered around me, watching my phone’s progress around the city – it had become a bar-wide event. The battery indicator of my phone, which shows up when you’re tracking it, was at an unnerving 8%. There was only one thing left to do, which was track it down ourselves. Three of Eric’s students, Dena, Roxy, and Roxi decided to help me out. They called another cab that was there in five minutes. In the meantime we changed into trenchcoats and fedoras so as to feel like we were truly private detectives on a mission, well, at least mentally we did. “Who’s going to yell ‘follow that cab’?!” I asked the girls.
We got in the cab, they told the story to the taxi driver and while tracking my phone yelled out streets for him to go to. He picked up his phone and called the dispatcher to try and call the taxi, but that driver never picked up. I would refresh the screen, call out the street “Tigrelui!!” The girls would respond in unison “tigrelui street!” And then the driver would say “tigrelui!” Into his cell phone, talking to the dispatcher, he too now fully invested in the hunt. We followed my phone around, the battery becoming ever more depleted, until it stopped moving on a small side street. We drove down the street and off to the side, in a small lot, was the taxi I had taken! The interior dome light was on and I yelled excitedly “That’s it!” The girls and I piled out of the car and surrounded the taxi with the stolen goods. I peered in the passenger window and spied my phone on the seat “There it is!” I couldn’t believe we’d actually tracked the phone down.
I tried to open the passenger door but it was locked. The driver got out of the car, looking incredulous at being tracked down. He stammered some lame explanation of planning to give the phone back tomorrow, which was clearly a lie. The girls and he bantered in Romanian before he finally got into the car and picked up my phone, continuing his false excuses. He gave it one last longing look then opened the passenger door and handed it back to me. We scrambled back to our car, hooting in exhiliration. On the way back home, after dropping the girls off, the taxi driver told me how happy he was we got the phone back, which was sweet. I paid him double the meter reading, a whole $15, which was a small price to pay for getting my phone back, and in all what ended up being a fun adventure. (Not that I wish to replicate the experience!) 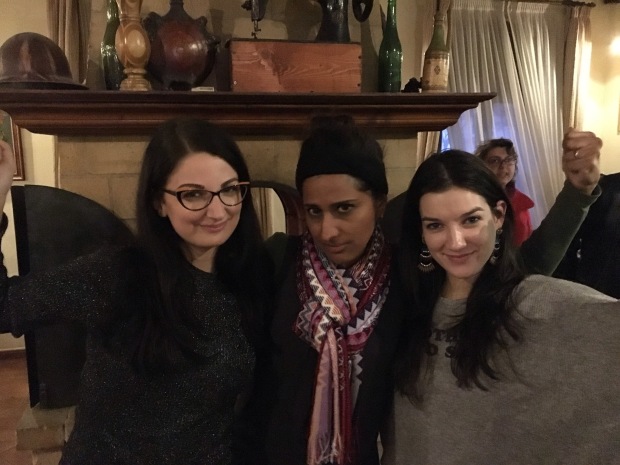 I recently changed the settings on my phone’s Weather app, deleting some cities which we didn’t need anymore – Tokyo, Saigon. My kids saw what I was doing and said to me, “Make sure you always keep Timisoara on, Mom, because it’s another place we’ve called home.”
And you know what? I think I will.

At the airport, saying goodbye with Romanian wine

3 thoughts on “In which I say goodbye to Romania, and have one last madcap adventure”