[We’re back in the States, and posts about the transition back will be up soon, but I have this need to keep things in chronological, if tardy, order, so in this posting we are traveling back in time to April!]

Fall break is upon us here in the Southern Hemisphere, and with two weeks off for the kids, two weeks of paid vacation for me, and two weeks of what is regular life for Eric, we headed South. It was cold and damp the night before we left, and we both had a bit of travel regret, wondering why we didn’t use at least one of these weeks to head over to Fiji instead and crisp on the beach.

No, we reassured ourselves, we’ll really enjoy the South Island. Beautiful it’s said to be. Very outdoorsy. Just like us. Super outdoorsy. And as it turned out, it was both as beautiful and outdoorsy as promised, though I’d be lying if there weren’t a few times I wistfully longed for a Fijian beach with a cocktail in my hand.

Other than our foursome, David Cooper travelled along with us. He’s a longtime friend of Eric’s from Michigan days. The five of us flew into Queenstown on a Saturday evening and checked into our Air BnB before heading out to find some food. On our quest for food, we went by a little counter store that promised tasty tacos. Tacos? We hadn’t had a decent taco since leaving the States and we were intrigued. We were looking for a sit down restaurant that night and promised to come back the next.

David Cooper doing what he does best, take amazing photos!

Queenstown is a compact city on the banks of Lake Wakatipu and nestled among rugged mountains. We couldn’t appreciate much of it in the evening, but the following morning showed us spectacular views. It’s known for being an adventure sport capital, but I couldn’t get anyone to go bungy jumping with me on the highest platform in the world (thankfully, because that looked terrifying) and we instead decided to hike up the creatively named Bob’s Peak. The faster and quadriceps-sparing way up the mountain is to take the gondola up but (see above) we are outdoorsy! So up we hiked, and found a windy trail through the pine trees peppered with thrones carved out of tree stumps. Taking our time and enjoying the regal view from all of them, we got to the top and found the stunning view of the city and the lake.

We couldn’t leave without getting SOME adrenalin flowing though, so off to the luge we went. In the States, when you have a mountain cart it’s on a safer single track that veers down and you can only speed up or slow down. Here in NZ you’re in a glorified go-kart and are on your own to careen down the wide track as fast or slow as you’d like, and it’s an absolute blast. 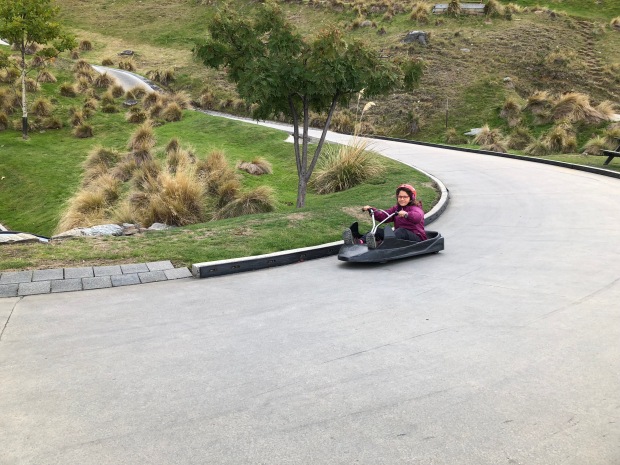 Afterwards we returned to Taco Medic, where we indeed found the most delicious tacos and nachos, with ingredients either locally sourced or imported from Mexico. It is an absolute crime that I did not take a single picture of us with the food, but we were too happy shoving it in our mouths to do so.

Onwards south to Te Anau, the gateway to Milford Sound. The first day we spent hiking through Rivendell, also known as the Kepler Track.

We’d been meaning to try geocaching for a long time, and finally remembered on this hike! For those of you who don’t know (the geocaching community calls you, ahem, muggles) Geocaching is a fun little outdoors game where using a GPS device or your phone you find little containers hidden in the outdoors. They’ll have a logbook and usually a small trinket, which you can take and replace with one of your own. There’s no purpose to it other than the fun of finding hidden puzzles and being outdoors. (That’s us! Outdoorsy!) 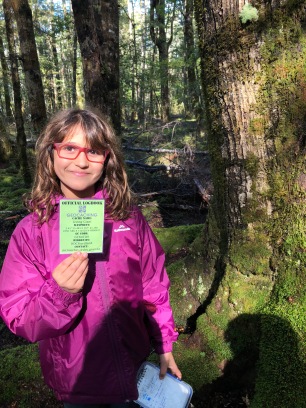 We were supposed to go to Milford Sound the next day, but the weather had other plans. A sudden fall snowstorm closed the only access to the Sound, so we had an indoor day and played board games. One of these is the WORST BOARD GAME KNOWN TO MAN. It involved polyominoes, or sets of five squares in various formations and colors. You had to collect a complete set of 20 – this part was fine, typical board game play of landing on squares and completing small challenges. But then, THEN, you had to arrange the complete set of 20 to make a certain picture. I consider myself a relatively bright person with a predilection for puzzles, and so I foolishly chose a picture of medium difficulty. This was insanely impossible. It was supposed to look like a set of mountains, but the most I could manage was a deformed dog. After nearly 30 minutes of struggling with the pieces this way and that, the boy finally declared victory with his card and the rest of us wept in gratitude, our heads aching from the effort. The snootiness that he STILL has over being the only person to win this game is obnoxious.

NOT the obnoxious game. I couldn’t bring myself to snap a picture.

We made it to Milford Sound the next day instead, and were rewarded with a perfect day. Fun fact: Milford Sound isn’t really a Sound at all, but a Fjord. “What’s the difference?” you may ask? So glad you asked! Fjords are inlets of water into land that are formed by glacier movements to sea carving the land away. A Sound is an inlet of water into land that is created by either sea level rise or land fall and has little to do with glaciers. Regardless of name, Milford is rightfully described by many as one of the most beautiful sights in the world. A small pod of dolphins thought so too and frolicked along side us for a while, enjoying the stunning view which is best left to photos for description.

First views of the Sound on the way out 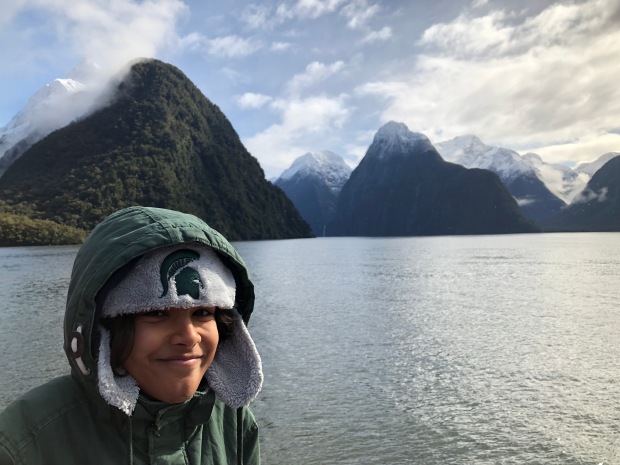 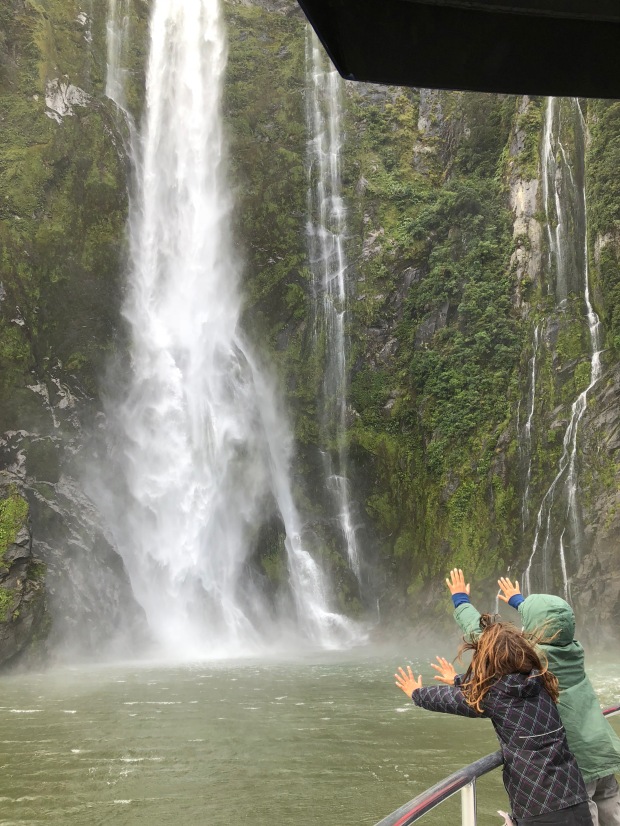 Touching the waterfall for luck!

Milford sound, you can just see the path of the ancient glaciers

enjoying a snowfight over the pass! First snow in 2 years!