Back in June, I picked up a hank of a lovely blue and green, thick and thin, handpainted yarn at the Estes Park Wool Market. I had always intentioned it for a hat and when the weather turned cooler, it was time to get going.

It was actually tough to find a pattern that worked for the yarn.  Initially I made the Utopia Hat, which looked great until I blocked it, after which it swallowed my head.  I redid it with fewer cast on stitches but screwed up the math and didn’t have an even number of pattern repeats and had to rip that out, too.  I tried the Unoriginal hat, but didn’t really like the pattern and that one would have been too small.  Finally, I found The Cabled Hat of Awesomeness (rav link), and it lived up to its name.

I realize looking at this picture that there is a small bit of schmutz on the second from the left cable.  This is basically how all of my clothes are–there is always some small remnant of child goo attached to it.  If I cared about this, I’d never be able to leave my house.

I was worried that the combination of thick and thin, multicolored yarn and cables would be a bit overwhelming, but I think this really works.  Multicolored yarns can be tough, as they can settle into large blocks of color depending on the pattern.  It was interesting to see how the colors shifted with the number of cast on stitches.  At 96 (with size 8 needles), it looked similar to the one above with hardly any pooling.  When I tried to redo the hat with 66 stitches, it left large blocks of color.  When I tried 60, it basically created stripes. With 72 stitches as pictured above, all the colors mixed together evenly. Here’s a closeup shot (colors are truer in the above pic): 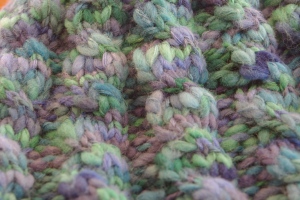 It was hard, too, to find a good needle size.  The yarn goes from being a super bulky to almost a DK size.  I started with 8s and my hands were cramping up terribly just trying to force it.  I wrote to the people at Cloud City Fibres and they suggested a 13, but the hat looked way too lacy.  I settled on 11s and they worked. (It sort of felt like Goldilocks! “These needles are too big, and these are too small, but these ones are juuuuust right.”)  In some places where there’s a bunching of the thinner yarn, you can see some gaps but it’s not bad.

This also used up a lot less yarn than I thought it would.  To figure out the exact amount, I brought out my trusty kitchen scale.  Weighing the total amount of yarn (287 yards) and then the hat separately, I realized that it only used 78! I’ve got a little over 200 yards left and am trying to decide if I should make matching fingerless mittens or a cowl…