Remember this hat? It took a lot less yarn than I thought it would, so I had plenty left over and thought it would make a nice pair of fingerless mitts.  I found this pattern, which I loved as you could unfold the mitts to be longer for extra warmth, or fold them back if you needed to use your fingers.

I wanted to make them longer than the pattern but wasn’t sure if I’d have enough yarn to make them even, and I didn’t want to knit an entire mitt only to find that I didn’t have enough yarn to make the second one as long as the first.  So I divided the yarn into two equal balls by weight first.  Then, I cast on with a provisional cast on, finished the mitt, and then picked up from the bottom and kept knitting until it was as long as I wanted, adding another cable to the wrist to fit with the pattern.  As it turned out, I had quite a bit of yarn left over and just started the second one from the bottom up.

I don’t typically consider myself much of a perfectionist, except when it comes to knitting.  My sister said that part of the charm of handknits is the imperfections, but I think that if you’re going to spend that much time making something it should be perfect–otherwise, why bother? Of course, this is generally impossible and drives me batty because nothing I make is ever completely perfect.

In the case of these mitts, I did the first mitt as above and then cast off with a regular cast off.  When I started the second one, I realized that I could start in a tubular cast on, which looks so much nicer.  I finished the entire second mitt, and then couldn’t stand how the original one didn’t have a tubular cast on/off, unraveled it entirely and reknit it with the appropriate technique. Much better. See? 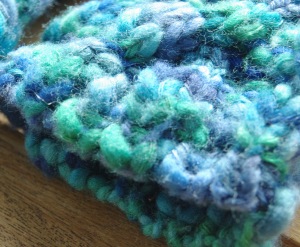