My general approach to new things is to just jump in and figure it out as I go along.

I could break this down a bit more like this:

3. Start new project/task with no real clue as to what I’m doing, only some vague memory and help from Mr. Google.

4. Realize I have bitten off waaay more than I can chew.

7. Final result not quite what I initially pictured, but looking fine.

I then repeat steps 3-7 with increasing ability and end up getting pretty good at what it is I’m trying to do.  Knitting, gardening, parenting, the triathlon–all fall into this same pattern.  I’ll walk you through the steps with my latest project.

My new thing (because, clearly, I need another project) is mid century modern furniture, like everyone else out there.  Actually, I realize that’s what I’ve always liked, I just didn’t have a good name for it.  I hate all things foofy and puffy in home design.  (Step #1)

Eric found a great vintage leather lounge chair at a local vintage store, and I went back to look for an end table and found this little guy. 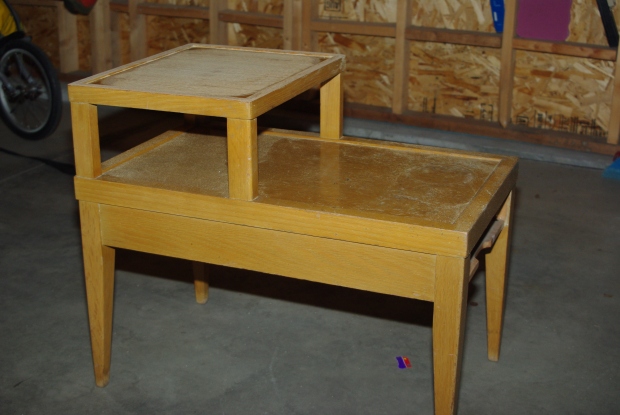 As you can see in the picture, this was after I thought, hey, I can just refinish that! How hard could it be? (Why I haven’t learned that the mere thought of that question should be a big red light is beyond me.) (This would be Step #2)

Here’s a closeup of the bottom level–you can see where the paint was pretty well worn, and it looked sort of crappy. 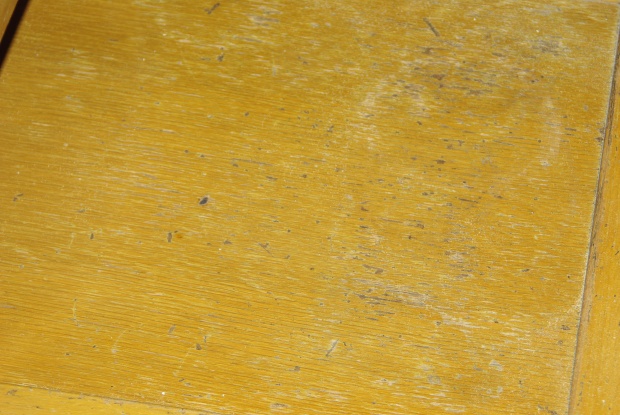 After dredging up memories of junior high woodshop and some time spent on Google (Step #3), I was armed with varying grits of sandpaper, Watco stain and brushes.  I then learned that it’s damn impossible to get all of the old finish off with just sandpaper on a piece like this with little nooks. I could NOT get into all the corners with the electric sander, and even with hand sanding couldn’t quite get all the old finish off.  I didn’t get a pic of the table when it was all sanded, but here’s one of the drawer.  I got a bit worried because at this point, it was looking a little pine-y, like an Ikea piece.

I really didn’t want to spend all this time to have something that looked like it came from Ikea.

At this point, all the Google instructions I found told me to basically slop on the Watco, wipe it off a few hours later, repeat, and then do it again the next day.

I did this a few times over a 3 week period and ended up with this sticky mess (Step #4): 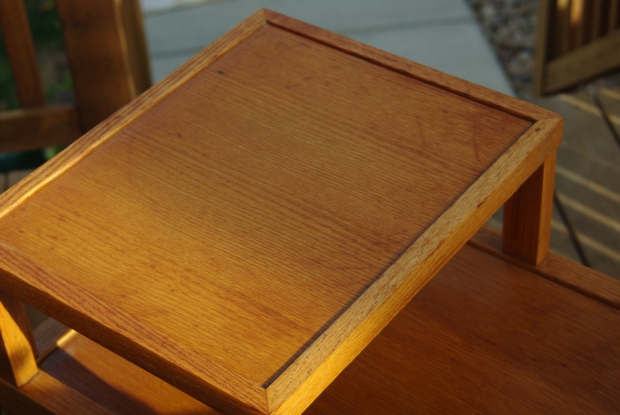 Now, the color looks okay in that picture, but if you look on the bottom level you can see patches of very uneven color and the whole thing was slightly sticky.

Back to the computer, I started Googling terms like “Watco finish sticky” and came up with a whole NEW list of instructions, which basically said NOT to do what I did.  (Step #5)

I then had to make a decision–either I could let it dry fully and live with it, or I’d just have to redo it.

What’s a perfectionist to do?

Out came the sanders again, and I completely redid the entire piece.  (Step #6) Here it is in its final resting place next to the couch.

And a closeup of the top, where the scratches are still there, but the color is much more even (Step #7): 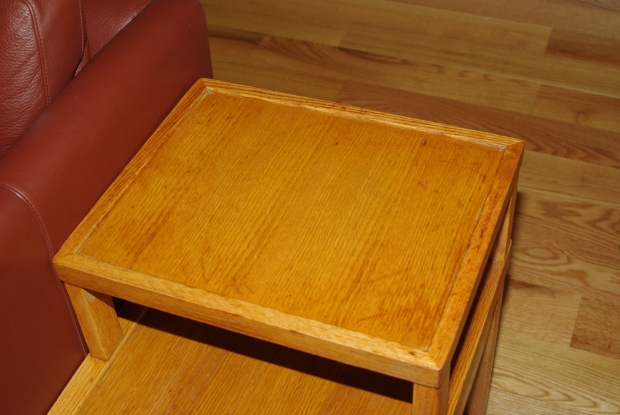 If I was ever to redo another piece like this, the big change I’d do would be to use a chemical stripper instead of trying to sand it.  I was hoping to avoid using more chemicals, but I think it’s kind of necessary to get a great result.

Now, I just need to find a nice table lamp for it.

Maybe I’ll find one at the vintage store. Oh! I know! I think I saw something online to  handmake your own lampshade.  It didn’t look that hard.

2 thoughts on “Trial and Error”