I am incredibly competitive.  I absolutely hate to lose at anything unless I feel like I have absolutely no skill whatsoever at it.  For example, I wouldn’t really care if I lost a game of Scrabble in Bosnian. I am a somewhat gracious loser outwardly, though internally I fume.  I am a horrific, horrific winner.  I try to come across as humble (aw, shucks, I WON? How did that happen?) but really I gloat mercilessly (YES! I rule! And you suck!).

This extends to almost anything in my life, including, believe it or not, knitting. So peaceful and quiet knitting is, you say, how can she possibly make a competition out of this? (Incidentally, there ARE international knitting competitions, most notably “Sock Wars” and “Iron Knitter,” but that’s not what I’m referring to here.) Really, for me it just means that I don’t think of knitting as hard. I mean, doctoring? That’s hard work. Teaching? Hard. Trying to wrap your mind around gravitational physics? That’s hard, too. But I don’t think that anything involving 2 sticks and a bit of string should be difficult, and I never quite get when people say that they just couldn’t get knitting. Most of these women have raised children, a task considerably more complicated and arduous, but protest that they just couldn’t make it work.

Moving on, what it comes down to is that I had yet to find a project I couldn’t knit successfully. This all changed with a recent pair of mittens.  I was so excited about them. They’re a pair of mittens with the pattern of Van Gogh’s Starry Night on the backs-hold both mittens together and you get a complete picture. I purchased the pattern and yarn MONTHS ago but hadn’t been able to get to it until recently. Eagerly, I sat down and began. I got to the first pattern row, and realized that the color floats were too large to work as fair isle, but still I pressed on.  Eventually I had about 6 strands of yarn coming off the needles and had no idea if I was coming or going.  I ripped it out.

No matter, I thought to myself, I am a GOOD KNITTER. I’ll just use another advanced technique and get these things made. I tried intarsia.  Now that was an even bigger mess, and I had at LEAST 12 strands of yarn coming off the needles and everything was all twisted up and I ended up knitting them shut.  I ripped that out, too.

Not one to give up, I tried again and once more, failed miserably. I was defeated by knitting. Pathetic.

I couldn’t even bear to take a picture of the disaster, such was my dismay. Bad blogger now, too!

Dejected, I asked for help on some knitting sites and found that the mittens, as written, are UNKNITTABLE. That’s right–it’s not me, it’s the pattern! Only a bit of relief because, you see, I still failed to recognize that the pattern wasn’t knittable when I purchased it! Quite a blow to the ego, let me tell you.

What was I to do next?

Clearly, the answer was to knit something so mindless that they couldn’t possibly fail.

I dug around in one of my bins of yarn and found a whole bunch of pink and purple cotton I’d picked up on sale a few years ago.  I don’t like cotton much for knitting, so it had just sat there.  But now it seemed perfect to pull it out and just start knitting some random squares.

I tried different patterns and techniques.

The overall effect was very soothing.

And at the end of the day, at bathtime, the kids now clamor for the purple washcloths! They love them! 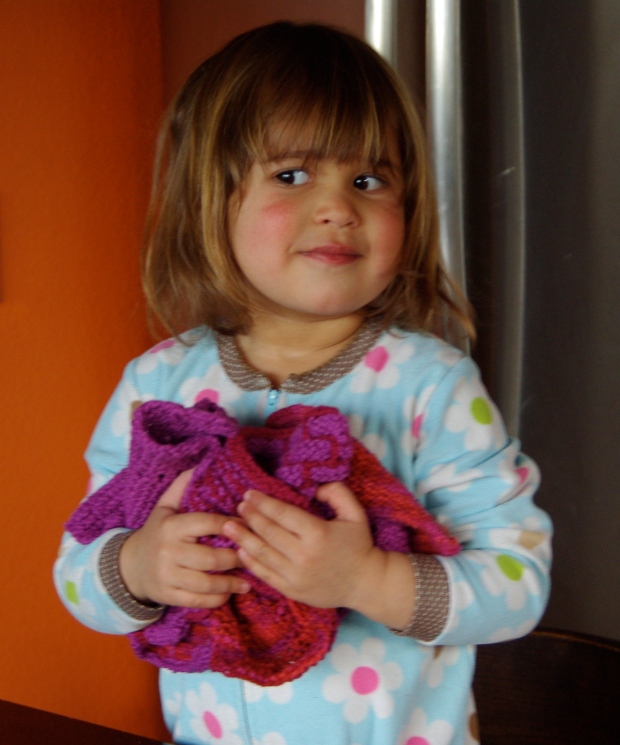