I’m almost a bit reluctant to post this, to tell you the truth. The last few weeks of weather have not been kind–severe late afternoon thundershowers have kept everything a bit too drenched, though that’s really the least of it.  Last week a hail storm ripped through the city, and friend after friend was posting on Facebook about how their entire gardens were destroyed.

I didn’t get any hail at all.

I haven’t wanted to post anything about the garden because a)it seemed a bit in-your-face to those who have tatters left, and b) I felt like I was challenging the weather gods.

Well, I think enough time has passed and I’m hopeful that the worst of the storms are over.

The little grass circle around the plants looks awful.  We’re going to reseed it this fall and hope for the best.  Somehow, the grass seems perfectly willing to invade into garden space but has no interest in growing into the brown patches.

The corn is growing nicely, though shorter than I’d anticipated.  There’s two varieties–the tall ones to the back are a popcorn and the ones in the front are some usual yellow corn. Maybe I planted a compact variety? I can’t remember. It’s fun to see them finally tasseling and flowering! They were initially leaning far, far over so you can see where I constructed a little twine support for them.  I staked the ends of the rows and then pulled twine across the front and around the back of the stalks to hold them up while they grew. 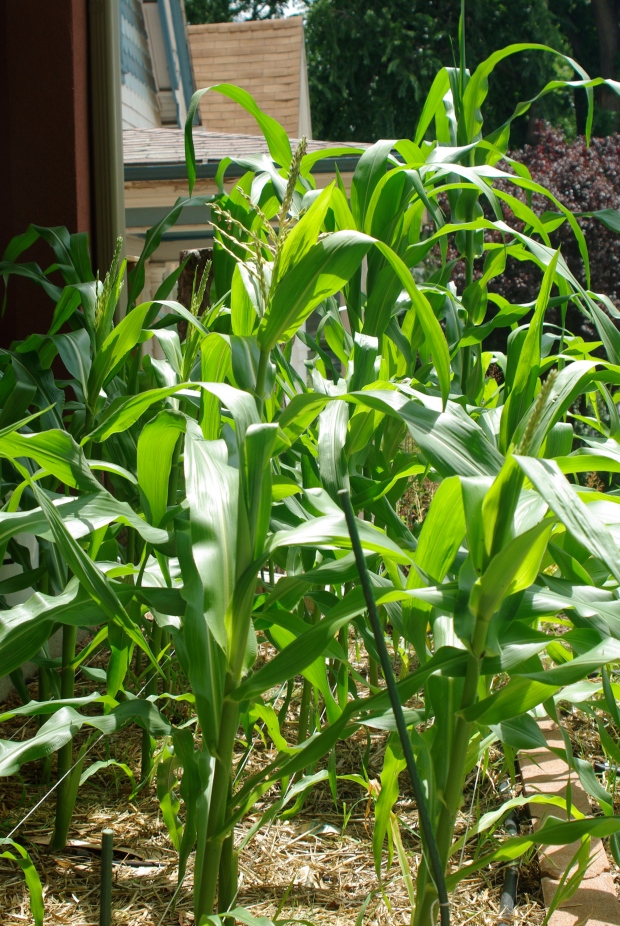 Here’s how they looked 15 days ago. Kind of unbelievable how fast they grow:

The squash have taken over their little rectangle, as expected. Next year probably 2 mounds will be plenty. There’s even a few baby butternuts on the vine, safely nestled under the lilypad leaves. 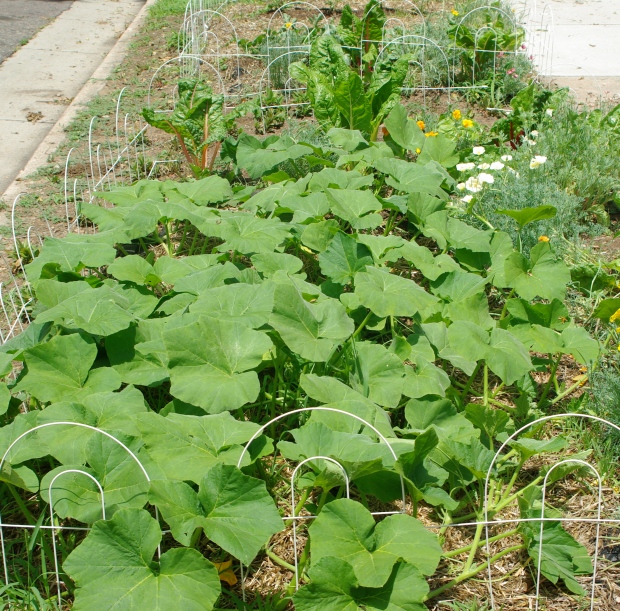 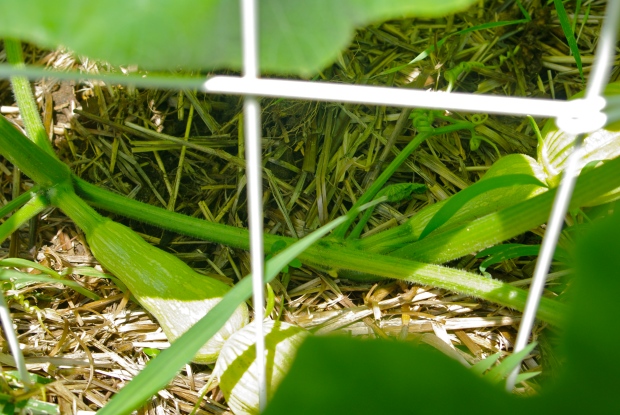 We even have a few red tomatoes!

Here’s another one, growing tall: 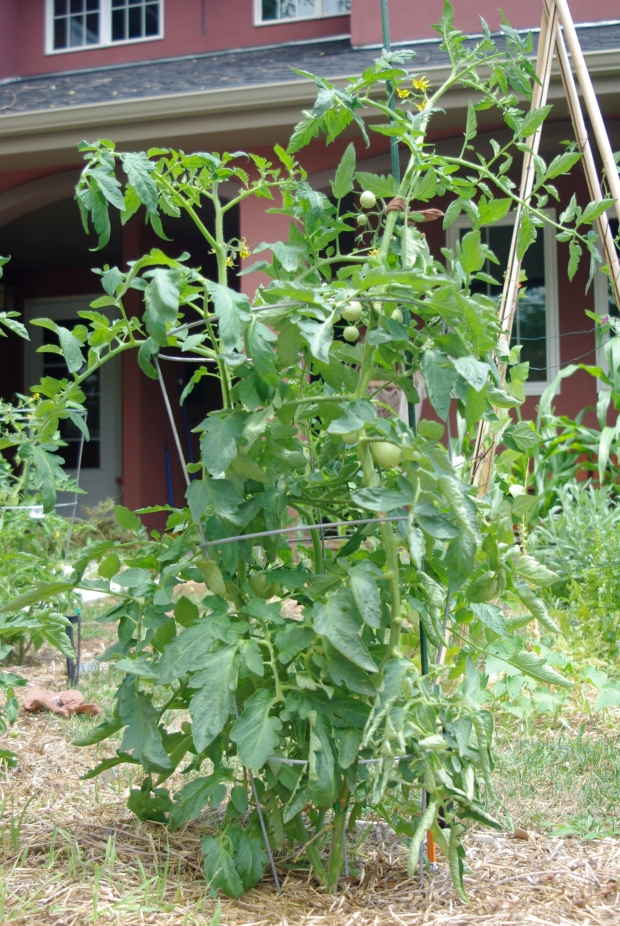 If you compare this year’s plants to last year’s, you’ll notice that the tomato plants I had last year were complete monsters. This year I was diligent about picking out the suckers, and I think my plants are a lot healthier, though a bit less bushy, than they were last year.  I also had a lot of problems nearer the end of the season with fungus and aphids, and so far that hasn’t been an issue which I think is because the plants aren’t as crowded.  I’ve also been feeding them fish emulsion once a month to fertilize them. It’s a bit stinky, but the plants don’t seem to mind.

The pole beans and cucumbers don’t seem to be doing quite as well this year, and I’m not really sure why.  I planted both scarlet runners and purple pole beans around all 4 poles, hoping that they would snake their way up and create a profusion of color, but it hasn’t been all that great so far.  It may just be a bit early, or perhaps I didn’t water them enough initally.  And the cucumbers are languishing, though again I’m not entirely sure why. 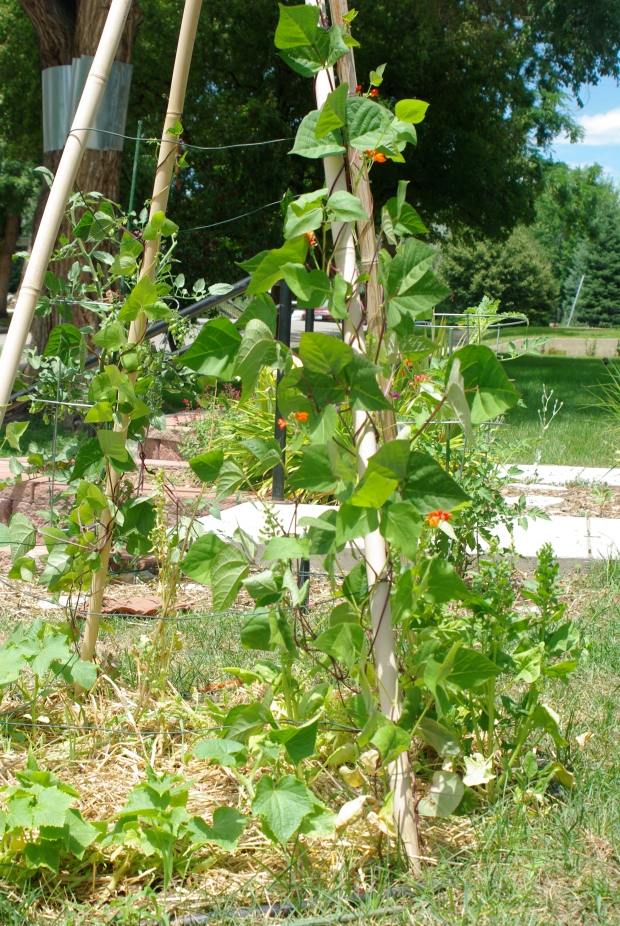 We do have chard coming out of our ears and have been eating it at least twice a week, though you’d never know it by how big the plants are.  It still cracks me up that both kids love to eat chard, not knowing that they’re not supposed to. We’ve also been eating a bunch of carrots, almost too pretty to eat. 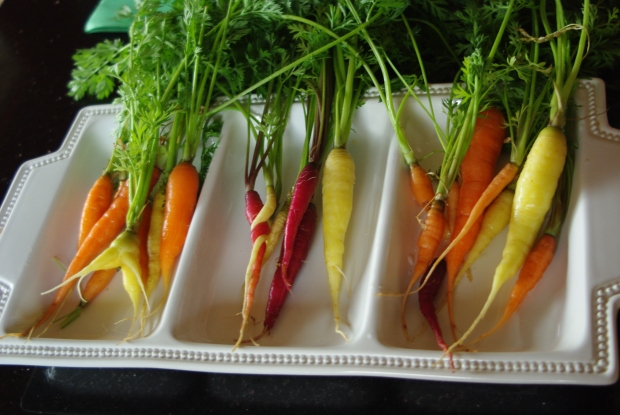 The peas are pretty much done and I got behind on the harvest so I let the remaining pods dry out and now have a handful of dried peas to throw into a soup. The cilantro also bolted fairly early as it usually does.  This year I realized that cilantro seed is coriander, and if I let my plants go to seed, could I possibly harvest coriander seed? The answer is yes, and the first seed that I plucked and broke open to sniff blew me away.  All of the other packaged coriander seed I’ve ever used tastes like cardboard compared to a fresh one.  I’m considering planting more of it next year–it draws a ton of bees to the garden and then I can collect the seeds as well.

The other thing I need to be better about is planting stuff in crops so that we’re not trying to finish 10 pounds of spinach in a week.  I say this every year and fail to be more organized about it, because it’s too hard to restrain myself from planting all the seeds at once, which I should just accept is the kind of gardener I am.

One thought on “*sheepish garden*”