I don’t know what it is about September, but I lose all motivation for the garden.  I stop watering, I stop picking, I really don’t pay it any attention. It’s terrible, I know, especially since things really only start growing at the end of July. I just get unmotivated because, with the exception of the grape tomatoes and the butternut squash, I feel like I’m the only one that really tries to eat everything that grows. I even told Eric the other day that I wasn’t sure if I’d do the garden next year. His response, “Yeah…maybe just do flowers and some basil.” Way to be encouraging. 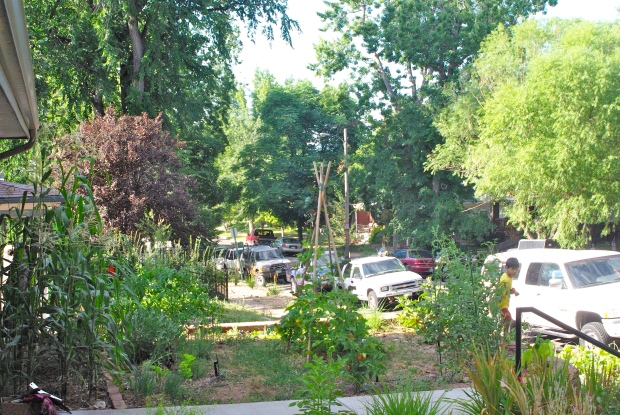 Garden at the end of August

Of course, I know that next year I’ll get all excited again and plant far more than is good for me.

Winners: Butternut squash, chard, most tomatoes, eggplants, radishes, spinach, all herbs, chard, and holy god the tomatillos! We had near a gazillion tomatillos.  I didn’t think we’d get any since I only planted one plant and you’re supposed to need two, but there must be one near by that bees cross pollinated. This must be especially true since I planted a purple tomatillo plant, but got only green ones.

Tomatillo plant--grew twice this big by the end

Runners up: Corn. We didn’t get hardly any yield, but what we did was very tasty and it was just fun to watch it grow, and have a little living screen on our porch.

There was also something that nibbled at the corn.  I suspect the squirrels, but can’t entirely exclude the birds.

Peppers–now, I didn’t get very many, but what I got were delicious and it’s the first year I got any at all, so it just makes me want to try harder next year. Lemongrass–grew well, made a few nice cocktails, but, really, I didn’t use it that much. (Note: If you want some free lemongrass, come and harvest it before it dies.) Beets–the few that grew were great, I need to start them a bit later and water more. Roma tomatoes–you know, I just didn’t get enough from one plant to bother. Maybe if I plant a few next year I’ll get enough to make sauces and freeze.

Losers: This year the cucumbers and beans were pathetic. Just pathetic. They grew late, yielded little, and the cucumbers were bitter to boot. Not sure what happened since they were both amazing last year. One of the problems was I tried to plant scarlet runner beans with the purple beans, and I think they only succeeded in making sure that neither grew well.  The watermelons were a joke. Once we harvested them they were gross and mealy.  Grass–not marijuana, people. The grass ring around the center has finally died. Next year I’ll just plop some flagstone over or something.

Despite my current apathy, I’ll miss the garden, as I do every winter. The last harvest portents the first snows, the perpetual cold, and the winter gloom. As a Californian transplant, I’ve never loved winter even though Colorado tries to tempt me with the mountains. I’ll wait for the joy in the kids faces as they tumble through the waist high snow and stay out far too long until they can come in pink-cheeked and ready for hot chocolate, which I’ll have been happily stirring over a warm stove.