The next day we went up and went to 4 and 20 blackbirds to have pie for breakfast, which is hands down my all time favorite breakfast.

There is nothing better than apple pie for breakfast. I dare you to disagree.

The girl, of course, had to be contrary and get a cinnamon roll instead.

Then it was off to Central Park to spend a day with Rebecca and her two kids.

Why I thought it would be a good idea to have the girl wear white pants is beyond me. We first went to Belevedere Castle, but it was sadly closed for maintenance.  I told the girl that we couldn’t go inside because the princesses were sleeping (I know, I know) which was apparently an acceptable reason and we wandered off through the ramble, pictured above.

I can’t believe that in the picture above we’re in the middle of New York City.  It felt like  a lost forest. All 6 of us (Rebecca + 2 kids, Me + 1 kid, Sapana) imposed upon an unfortunate but muscle-thighed pedicab driver to take us to the carousel, which was such a hit we went around twice!

Outside was a juggler (NOT a juggalo, that would be terrifying) who put on a near private show for us.  As we all sat down to watch, many others hurried by.  It’s too bad because he was pretty funny.

All the kids got to try out balancing a spinning ball.  The girl was VERY serious about this.

Then there was time for a bit more rock climbing.

It’s tough to tell from the picture, but that was a BIG, BIG rock and the kids ran all over it, completely undaunted by the height. I love that my little girl is so fearless and unafraid to get dirty.  Though I should note that Rebecca’s daughter ran exactly where my girl did and yet managed to stay pristine, so maybe there’s a skill there my little one is missing.

Then it was time to say goodbye to Rebecca and friends and board the train for a trip to…LONG ISLAND! Woo-hoo!

Just kidding! We were on our way to meet Sapana’s boyfriend’s family, who were so sweet and nice to us. They handed the girl a doll when she got there and she was in heaven the rest of the evening.  His mom’s cooking was so delicious, too-it was so nice to have a traditional Marathi dinner that it made me resolve to cook it more for my kids so they grow up with the same love of those dishes that I do.

The next day was the last one for me with the girl in the city.  Her grandparents came to whisk her away to Allentown for the weekend. I looked at her before we left the house and said, “I’m going to miss you so much when you’re gone, little one.” She looked at me, reached out and touched my chin, and said, “Don’t be sad, Mommy.  I’ll be back soon.” So much for parental attachment.

That morning we had fun at the Park Slope playground 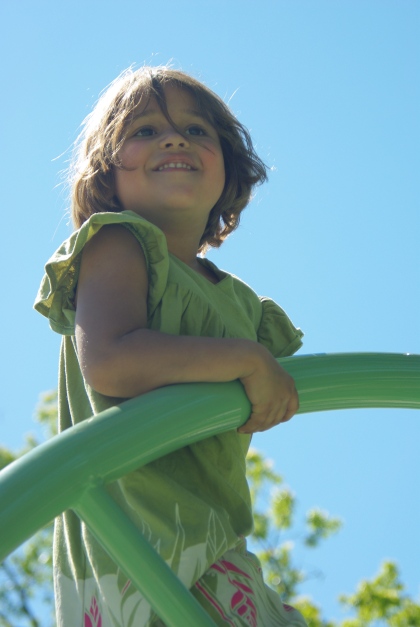 This piece of playground equipment took no less than 4 adults to figure out.  After we did, it wasn’t all that fun anyway.  It was too much like exercise trying to be disguised as fun. 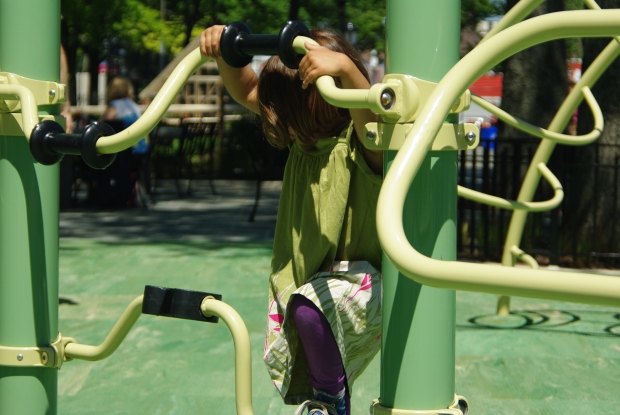 The climbing structure, on the other hand, proved irresistible to grownups as well as kids.

After that, it was time to say goodbye to the girl. Sapana and I wandered around New York for the next two days rather aimlessly.  It was so fun to spend time with her, though I did feel a bit too aimless at the end of it. That evening we had delicious sushi and went to see “Battle Royale” at the IFC film center, which was…an experience.  The best part was the previews, which featured this GEM of a short from the New York Times op-video.  Please spend 2 minutes of your life watching it (link below).  If you do not guffaw at least once, email me privately and I will send you a $5 Starbucks gift card.

Sunday morning, Sapana had a race.  In kindness to her I will not post pictures of her running, because with the exception of that one genetic freak, all pictures of us running are horrible. It was the Portugal day race, and can I say that people in New York were all about Portugal, except for the race announcer who only knew a few fun facts and kept repeating them in an elated tone. “Did you know that Portugal is where Port comes from? I didn’t know that! Buy some!”

After that was more aimlessness and then the plane home, back to Denver, to a joyful reunion with brother and Daddy.

Oh, right…brother and Daddy.  Where were THEY during this week? Off mountain biking and fishing! Next post all about the boys.

And as a final note, it was so great to travel with the girl.  I’m already looking forward to next year’s trip with the boy, and wondering if we should go to New York again (which you could visit every year and have a different adventure) or think about branching out somewhere more adventurous, requiring a passport stamp, for example.