NYC this year was a blast.  The boy is almost 8, which meant that we could really be tourists and DO things, which was so much fun. Also, he can read, which makes travel time that much easier too. Instead of worrying about what to do on the plane or trains or anything, we could both spend our time reading peacefully as an option, especially when our flight was delayed by an hour. (Don’t you worry, I came armed with an iPad, iPhone, and plenty of downloaded videos too.  I’m not THAT virtuous. But battery life is limited, right?) The plane flight was actually easy.  Those of you with younger kids who have flown with them-there is hope, light at the end of that long, dark tunnel.

We got to Brooklyn late and headed straight for dinner: Ethiopian food, which was very tasty.

Then we headed to Central Park and rented bicycles.  I tried to rent from a local bike shop but they don’t rent to kids because of insurance issues.  Luckily, the central park boathouse has no such qualms and gladly gave us 2 wheezy bikes. This was one of those things I’d always wanted to do and we enjoyed every minute.  Future reference–get a bike from one of the real tourist places because then you get a lock and can stop and explore.  We would have loved to stop at the north side nature center but couldn’t because we couldn’t lock up the bikes. (side note for facebook friends, you may have seen some of these pics already but I find it’s easier to find them again if they’re here. Besides, I just love some of these)

After the bike ride we strolled up to Belvedere Castle-which was less of a castle then expected but did have cool views.  There was a school group there and it became a bit like “Where’s Waldo” trying to find the boy, since they all wore orange shirts too!

can you spot him?

After this it was off to the Met!

The boy loved the Egyptian section and we spent a lot of time in Arms&Armor too.  We then wandered and came across American section and the period rooms where they have recreations of different rooms from different eras in America’s history.  I just loved this and didn’t even know they had such things! We pretended that that was where Claudia and James Kincaid would have slept had they come to the Met now, since their original bed has been taken off display. After this you might imagine we were getting tired-I wanted to head to the painting galleries before we left, but we just didn’t have the heart to enjoy them.  Hopped the subway to Ippudo where we got in without any wait (which I’ve heard is tantamount to magic in New York), though it might have helped that we were eating at 6.  Dinner: Ramen noodle bowl, delish.

We took a little tourist break the next day and went up to New Jersey to visit Kara and her adorable little toddler, who was just enamored of the boy. Kara and I studied abroad in Ghana many many moons ago, and it was so fun to see her and meet her little one.  Then it was back to the city for the MOMA.  I love the MOMA in NYC.  Busy and crowded, but who cares? I downloaded the free MoMA app so we didn’t have to wait in line for the audio tour (tip!) and set out.  I just love that feeling of turning the corner and oh holy moly there’s Starry Night! I mean, Starry Night! Even though it’s so famous and we’ve seen it a million times, it is just mesmerizing in person and even more beautiful.  Some of the other highlights for me were Sleeping Gypsy (didn’t realize it was so big!) and the Picassos. They had a exhibition celebrating modern design from video games to minesweeping that was so, so cool to see. Here’s a link to his website-check it out. Then to dinner: Sushi and off to see Matilda on Broadway!

Times Square is one of those insane tourist traps that I love to visit.  I know all real New Yorkers turn their nose up at it, and the lines at ridiculous places like the Bubba Gump Shrimp Co. are bizarre-I mean, I don’t understand why anyone would eat there when there is actual good food not too far away, but there is just no place like it that I know of and it’s something to behold.  For a half hour or so anyway. 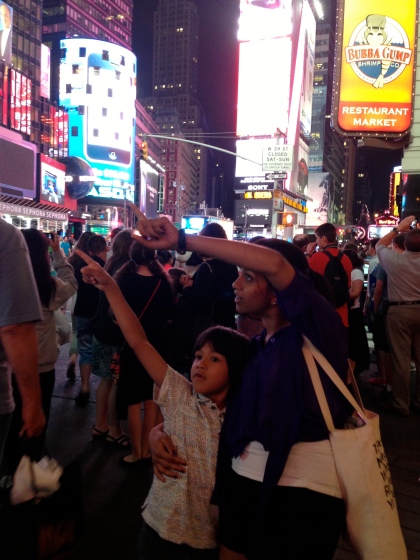 Next day off to Westchester to spend time with my friend Rebecca from med school, which was wonderful.  Dinner: delicious home cooked salmon.

And then, off to Long Island for my sister’s Engagement Ceremony!

Something funny on the way to the mandap

Sapana and her fiance Sachin

Sachin’s parents threw such a great party! Everyone had so much fun and it was great to meet so many people on his side of the family. Dinner: well, duh, Indian food.  New to me: Tikka Paneer and Gobi Manchurian, which I will order any chance I get.

The next day, back to the city for us to spend time with cousins and Lady Liberty.

standing guard over the harbor

The statue just opened on July 1st, and it was packed.  We couldn’t get tickets for crown access, but visiting the pedestal was just great and I loved learning more about the history of the statue and the building of it. Dinner: pizza.

Almost done! You might think that we’d take a break at this point, but you’d be wrong.

Next day was Empire State Building-this is one of those tourist things I could personally skip, though the view is spectacular.  I also used it to teach the boy about what he now calls, “Art Gecko” style architecture. I’ve never been at night, though, so maybe that’s something for next time. 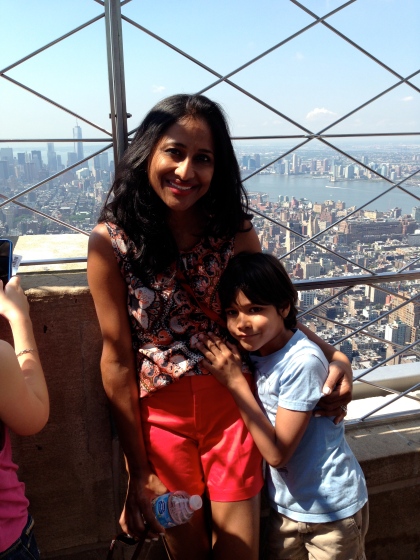 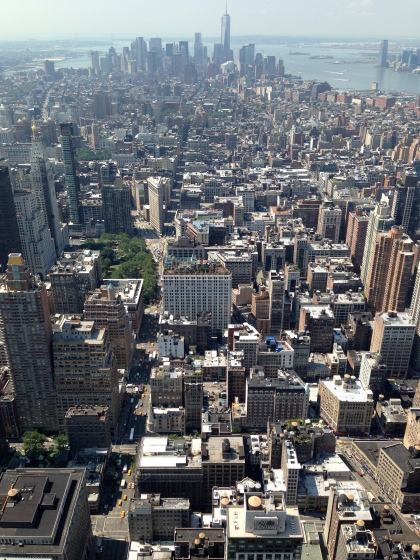 And then off to the Intrepid Air&Space Museum. This place was awesome.  I could take or leave all the fighter jets on the aircraft carrier-I’m not really a plane person, though I did like the stealth plane. And then inside was a SPACE SHUTTLE.  As someone who grew up in the 80s, I have a mythical love of the space shuttle-we all watched as they took off, we all watched the Challenger disaster.  To go into a hangar and have one there was incredible. 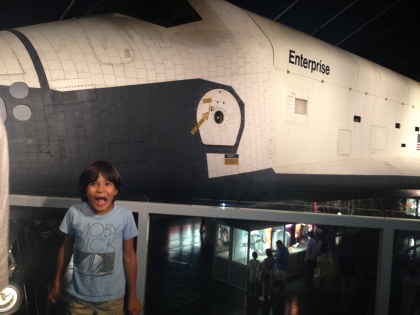 We also took a tour of the nuclear era submarine which was cool and entirely claustrophobia inducing. To imagine the hundred + men living in that space, filling it with cigarette smoke, deep underwater-I was happy to get to fresh air. 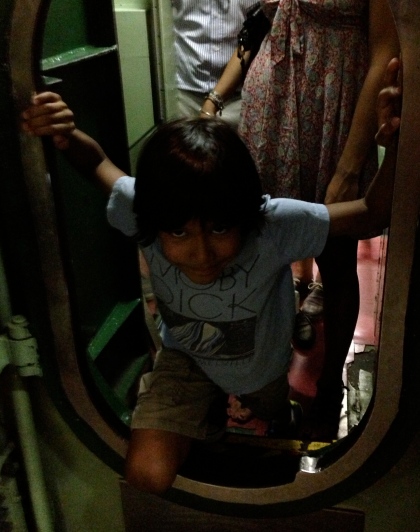 Last day we just wandered around Brooklyn, did a little shopping and had our last NYC meal: Veggie burgers at BareBurger.

Coming home was bittersweet-we did so, so much and had such a great time.  It’s also going to be the last time we stay in Brooklyn since by the time we have our trip next year, my sister will be married and probably living on the UES. I’m going to miss Park Slope-I know all the stores and restaurants in my sister’s near vicinity and it feels familiar now when we go, so knowing we’re not going back there makes me just a little sad. Of course, it’s New York so there’s a new adventure out there just waiting for next year.