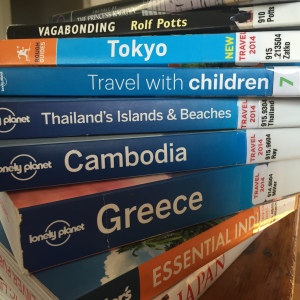 This is one of  my favorite parts of a trip, where you start looking through different travel guides and see how much delightful things there are to see and do around the world. It’s full of possibility and imagination and delight, and has none of the pesky realities of cost and actually getting there.

I’ve thus far just focused on the Japan books, since that will be the first part of the trip. Or…maybe not. As I’ve just learned, August is intolerably humid through most of Japan, with humidity up to 80% on many days. Unfortunately, we don’t really have the flexibility to go there in, say, April when it’s truly lovely given the school schedule.

August is also a heavy travel month in Japan given that it’s their summer vacation too and it’s also time of the Obon festival so we’ll have to make some more plans in advance since the Japanese are traveling also! One thought I had is to start with a week or so in Vancouver. We’ve never been and would love to go, August is pleasant in Vancouver, and flights there are surprisingly cheap and flights TO Tokyo are also fairly inexpensive! Another idea is to spend time in the mountains or Hokkaido first where it’s cooler and more nature-y.

Reading about Japan is so fun-whether it’s learning about the Studio Ghibli museum, tasty ramen, the outdoor hot springs (where many ban tattoos as they are considered tied to the Yakuza!), delicious sushi, the tons of fireworks festivals throughout August, the temples, yummy udon, Ninja training academies, all the crazy Harajuku outfits, Tokyo Disney and shabu-shabu. Did I mention the food?

It’s also really nice that all the prices are listed in Yen and I have no idea how much that is at this point. Sure, I could plug it through a converter but where’s the fun in that? Right now there’s so many zeros it all seems ridiculous! I’m going to live in that world for a bit. Besides, we’re not doing this as a shoestring trip-while I don’t want to be spendthrift, we do have the luxury of not needing to spend only $50 a day and I know we’ll be able to make up for it in Southeast Asia and India.

And it’s fun to be able to look at thing that I wouldn’t be able to look at without traveling with kids. By which I mean, I would normally be somewhat bashful about wanting to visit Tokyo Disney or a Sanrio store or the Ninja training but hey, if the KIDS are clamoring for it, who am I to stand in their way, right?

Anyone who’s been there have some must see sights, possibly off the beaten path?