This was a year for rain. June was wet and cool for much of the month and I couldn’t even get things planted until much later than I like to. I forwent the walls o’ water this year because laziness and it ended up being a complete blessing. People who planted in May saw their entire gardens washed away by rain and hail. Early June when I finally got everything planted here’s what it looked like:

Compare that to the pictures I took in June a few years ago and you can see how behind things were this year. Nevertheless, like I said things grew as they do and now I again have a small jungle.

Thus far we’ve had good tomatoes, squash, eggplant, broccoli, a few peppers, basil, tomatillos & carrots, but NOTHING like last year where I just didn’t know what to do with all the produce. I’m not sure if I’ll have enough to can this year, but the big Roma plants haven’t ripened yet and as they’re determinant tomatoes they all ripen at the same time so I might be able to make a few batches for sauce over winter.

This year the kids had their own little plot in the front which they were responsible for choosing, planting and caring for over the year. They’ve done a good job with it and it was delightful to see them full of pride when they would wrest carrots from the ground or check on the peppers for just the right redness to eat!

It’s getting colder now and I’m watching temperatures near daily-soon will be a frost where I will have to pick everything or try and use sheets to cover the plants for a night.

I’m sad that next year with the travels I won’t have a garden. It’ll be the first time in several years. I’ve realized that the garden gives me a sense of real seasonality. From the moment I first plant in the ground, usually mid March, winter is over for me and I no longer want to go snowboarding even though there’s plenty of snow in the mountains. And somewhere around October when the mornings are cool with just a bit of bite, I realize that summer’s really over and I stop wanting to do anything with the garden and let it fall into decay. The rhythm of life and seasons which is so settled for me here will be turned upside down starting next summer, and while there’s an excitement to that and a knowledge of growth, there’s also a wistful feeling of missing what is normal and standard and regular and familiar. 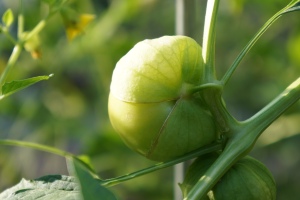 tomatillo, bright in the morning sun

brightness in the green