A few weekends ago the family went back to MSU for the Alumni Weekend. We’d been talking about a trip back for quite some time. Eric has stronger ties to MSU and East Lansing than I do-he got his PhD there and came back to teach there as well. Given this, he was more involved with the undergraduate campus and life than I was. The medical school campus was just off the main undergrad campus and we rarely had cause to go to the main campus. There were plenty of tailgates and games attended by my med school classmates, but somehow I never went to a single one. And while I love my medical school and classmates, I harbor no love for Michigan and the snow and cold. Nevertheless, it is where we met and Eric has managed to make the kids into diehard Spartans fans so off we went!

Michigan State University was the first Land Grant university established in 1862, under the Morrill Act which gave public land to universities to sell to fund centers of learning focused on agriculture,science, military science, and engineering. Morrill Hall on the campus was where Eric had his office, and has now unfortunately been demolished to make a parking structure. 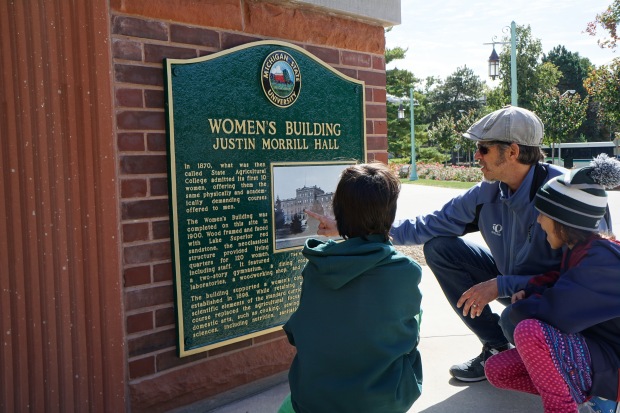 We met up with Eric’s old adviser and longtime friends Barry and Sandy, who took us to the campus dining hall for dinner. The kids LOVED eating at campus dining. The hall is huge and has about 10+ stations for all you can eat pasta, pizza, sushi, salad bar, sandwiches, dessert, mexican and more. It was a fun reminder of how the freshman 15 is so easy to come by.

The next day we went to the MSU bookstore and did some real damage outfitting all of us in MSU gear. I drew the line at getting a flag for the house and said that one hat per person was MORE than enough. We STILL managed to come home with an extra T shirt that somehow skipped my notice. 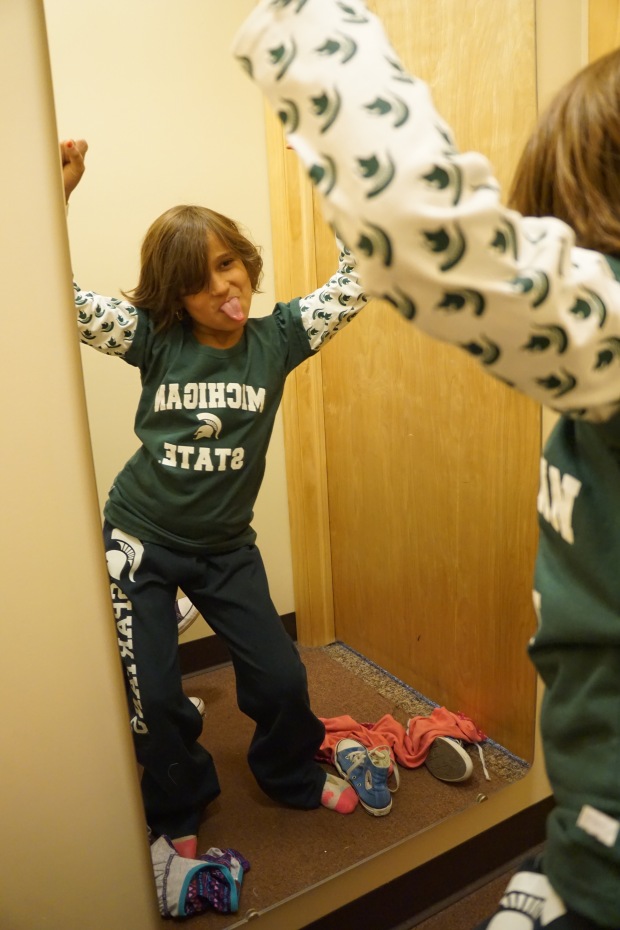 The next day it was off to the game! Seriously, I can’t believe that I never managed to go to a tailgate or a game the entire time I was there. It was a total blast!

And freezing cold. Note the mittens, hat, jackets. It started to rain just before halftime and we were OUT. Went back to Eric’s friend John’s home to watch the rest of the game and drink beer and cheer the team to victory next to a warm crackling fire. Much better.

The next day we had a late flight so went to Detroit and visited the art museum. It was another cold, drizzly rainy day so our initial plan to walk around outdoors was shelved. I loved visiting the signature piece at the DIA-the Diego Rivera murals.

We also took the kids to visit the coffee shop where Eric and I first met, which at the time had the racist name “Beaner’s” (for coffee beans, people) and has now been renamed “Biggby’s”, and also to some other haunts.

A few observations–I couldn’t believe how branded MSU has become. Neither Eric nor I remembered this many people wearing State gear around. Every single student we saw had on at least one if not more pieces of branded MSU wear. Is it like this on all college campuses now?

The other thing I thought of was how we do things a bit differently with the kids-we ended up taking a visit to the arcade Pinball Pete’s when we walked past it, something we certainly wouldn’t have done had it just been the two of us, and it was a fun diversion for the day. I look forward to other little detours like this when we’re on the road.

And about that-I also realized that something that might be hard for me next year is being around people all the time. Eric and I and the boy are people who like our alone time and find it as a way to recharge. The girl likes to be as physically close to someone else wherever possible and doesn’t fit into that mold. I think we’re going to have to find ways to have down time or do some split up days where it isn’t all four of us all the time.

And the last thing-going away made me realize how ready I am to just GO. For the first time when we were getting on the plane to come home, I didn’t really want to come home. I just wanted to keep going to somewhere else, somewhere new, and keep moving.