We made it to Bali by way of a two hour layover in the Singapore Airport. I had told the children that in Singapore it is illegal to leave a toilet unflushed, and the boy gleefully taunted the girl with this fact, as she has a reputation for leaving…shall we say “presents” for us in the bathroom. He was extremely disappointed to find out that they do not check the toilets after each use, and that irresponsible bathroom goers could get away scot-free. The kids also had their first experience on Singapore Airlines, which is of course THE BEST, and really, really want all of the rest of our flights to be with them in the future. If only.
We’ve had a few days in Phnom Penh and are on our way to Siem Reap now. Phnom Penh can be described the way large cities in developing countries are always described in travel guides, which is sprawling, congested and polluted. And while the country and culture are millenia old, the city is a fairly new one in a way, rebuilding itself after the destruction wrought by Pol Pot and the Khmer Rouge government which only ended in 1979. When the Khmer Rouge took power in 1974, the citizens of the city were ordered to leave and go live in the countryside, where they were put into forced farming labor camps. After the fall of the Khmer Rouge government, there was a return to Phnom Penh, but the city had seen destruction and it was first come first serve with regards to taking propery, so it wasn’t as if everyone just settled back into place. Add to that that approximately 40 percent of the population died during the 4 years of their rule, and you only begin to get the idea of what the city has been through.
We settled into our flat, a nice duplex very close to the Genocide museum, which is made largely of concrete as are most buildings here. Next to us was a large open air restaurant called “Five Guys Fresh Beer” which is the only microbrewery in the country, as far as I was able to find out. We tried the beer, and I’m sorry to say that for beer snobs such as ourselves, it resembled nothing more than a watery homebrew you might be proudly offered by the potbellied suburban dad with a man cave in his garage. If this is you, I’m sorry. I’m sure your beer is delicious.
After New Zealand and Australia, where an average lunch could easily cost us $75-100 and we cooked in as much as we could, restaurant meals for the four of us here range about $20-35, so we’ve been eating out and enjoying every bite. Interestingly, the currency in Cambodia is largely the US dollar, so it’s been nice not to have to divide or multiply to make sense of how much we’re paying for things. (They also have the riel and you will get change in riel notes, but everything is listed in American dollars)
Our first day, we hung out in the morning with plans to head to town center, have lunch, then tour the royal palace afterwards and check out some shops. The weather, however, had other plans for us! We learned quickly that when you feel the brisk breeze go through your hair, you’d better find shelter, and fast.
Roads in Phnom Penh are somewhat harrowing, and are similar to other developing country cities, however were crazier than those in Denpasar mainly because Phnom Penh is much more densely populated. Sidewalks are nonexistent, car lanes are meaningless, motorbikes don’t bother following road signs, and the streets are filled with a mix of open air tuk tuks (a carriage pulled by a motorbike), motorbikes, scooters, taxis and buses. The air is thick with exhaust and your eyes start to water before too long if you’re in an open vehicle. 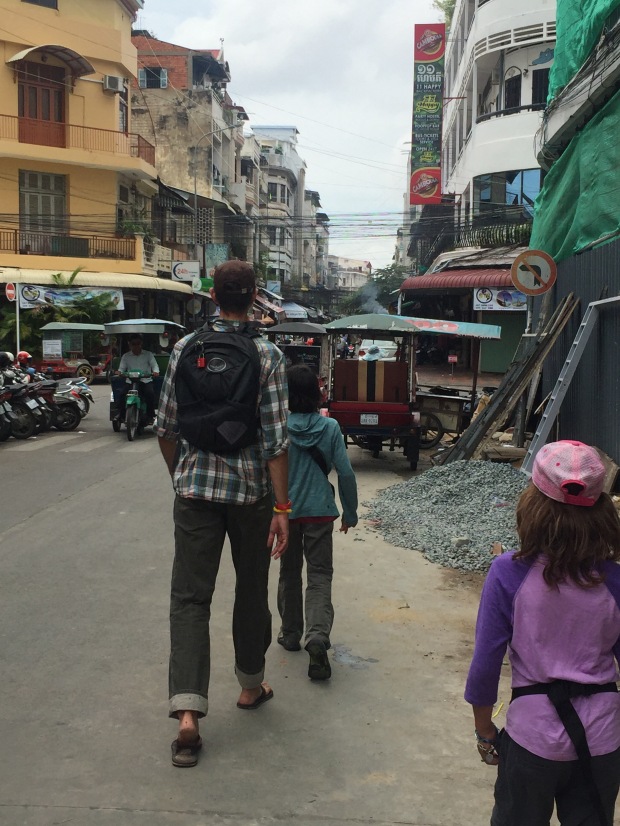 We wandered around for a bit before settling on a spot for lunch and then headed to the palace. We stepped outside and noticed that during our lunch, dark clouds had amassed over the city. A strong wind blew through the street. Ah, we’ll be fine! We thought.
A few drops of rain sprinkled down, and we noticed the street sellers rapidly covering up their stalls. Hmmm. Maybe we should reconsider our plans. No, we can make it, we thought. It’s just a few drops! We kept walking down the street and in about ten seconds the sky opened up and raindrops as big as marble hail descended, nearly drenching us before we dove under a shop awning. Two Cambodian Police officers were sitting there and they took one look at us, the idiot tourists, and kindly offered us seats, pulling out a stack of plastic chairs for us to sit down in and watch the storm thunder along.

And then we could do nothing but wait. In a way, I was glad of this. One of the things I want the kids to learn (and I could use some of myself, let’s be real) is learning how to wait. In the US, we wait for nothing, and if we have to wait for something it is a great source of annoyance. I remember one patient who had been admitted, gotten labs done, a procedure through radiology, and lunch, and was still annoyed that the whole process had taken SO LONG even though all of that took about four hours, and then he was annoyed that results weren’t immediately available. I actually said to him, “Medicine isn’t like ordering from Amazon. Some things take a little time to figure out.” If there’s bad weather, we usually are able to escape it easily in our cars or our homes. Here, there was nothing to do but wait it out. Soon enough the storm subsided enough to allow us to walk out again, but the streets were too flooded for us to walk to our destination. We hopped a tuk-tuk to some shops a few blocks away instead, thinking that if the rain passed we’d make it to the Palace after all. Cambodia seems to have a big trade in the handicraft market, and many of them advertise that they specifically support disabled people or street children as well. We found some lovely scarves, souvenirs and gifts to bring along, and I even bought myself two dresses, the first new clothing I’ve bought since leaving.
The rain showed no sign of letting up, and since we’d planned a trip to the Genocide Museum and the Killing Fields the next day, we wanted to get some books about Cambodian history and culture for the kids. We hopped a Tuk-Tuk again and went to the excellent Monument bookstore, where a very nice employee gave us great suggestions for books for ourselves and the kids. After this, we were hot, wet, and tired, and realized that a Palace tour just wasn’t going to happen. Back home we went, to relax and enjoy another night of takeout, but not before a slightly stressful tuk tuk ride.​