I love Disneyland. I get the problems with Disney, and have many issues with it myself. I hate the princess culture and the movies that teach that the main goal for a girl is to make sure she gets her man, no matter what the cost. I dislike the sharp dichotomy it’s made in gendering toys and play for boys and girls, so much so that even Lego has a “Friends” line to appeal to girls with sets like “hair salon” and “pet groomer.” Don’t kid yourself, it’s a princess set. (Full disclosure, we own several sets and the girl loves them.) I don’t like how much focus there is on a girl’s beauty being her defining feature, as if nothing else matters. While Disney has done work to move away from this in recent movies, the problem remains.
That said, going to Disneyland/world/theme park you name it is one of my favorite things to do. I love the feeling of walking through the gates and being immersed somewhere else entirely, and Disney does it very, very well. As a kid our family went to Disneyland quite a bit and I have very fond memories of these trips. Also, I knew that going to Disneyland is a big thing for Japanese people, so I wanted to make sure we took part in this very important cultural experience.

Eric hates learning about other cultures so he chose not to come to Disneyland with us. Tokyo Disney has two lands here – Magic Kingdom which is the same as Disneyland in California, and Tokyo DisneySea, a water-themed land that’s unique to Tokyo. We only had a day and you can’t get park hopper passes for one day, so we chose DisneySea! We went on a rainy Tuesday thinking this would keep the crowd down, as these parks are extremely popular. Turn out that Japanese don’t give two figs about the rain or schooldays and it was as busy as midsummer in a US park. Peak wait times for rides was up to three hours for the popular ones! (We never waited more than 30-40 minutes though, as we skipped the most popular ride having ridden it at California Adventure, wisely used fastpasses and took advantage of the fact that Japanese NEVER use the single rider line. The three hour wait for Indiana Jones meant nothing to us as we just walked onto the ride, because Americans we don’t care about single rider.) I was excited though, that it was one of the costume weeks where people can come to the park dressed up and I’d read that the Japanese get really into that. I had no idea how into it they were.
We hopped the train to the park. As we got closer, we noticed something. Groups of girls ranging from 2 to 10 in number were clearly going to the park, with everyone in their group dressed IDENTICALLY down to the hair accessories. Some people were heading in with rolling suitcases, which I only understood later. As dumb Americans who wear whatever to theme parks, we didn’t even coordinate! Quelle horreur! We bought headgear as soon as possible so we at least had a modicum of spirit. They do this because not only is going to Disney important, but so is taking perfectly posed pictures everywhere, and I have to admit that it does make for a better photo than the standard American wear of baggy shorts, oversized offensive message tee (No money no honey!) and fanny pack with everyone wearing mismatched colors.
We got into the park area and immediately began to see people dressed in handmade costumes that they had brought in their rolling suitcases and changed into at the park. Holy cats, readers, these were incredible. People were detailed down to the last accessory and I noticed they usually traveled with a still costumed but slightly less detailed companion, who’s job it was to hold their stuff for pictures. They also have a specific pose they use for pictures. It was so, so fun to be walking around and then suddenly be in the midst of a sea of Ariels as we approached the Triton’s Kingdom land. It reminded me of the old days of going to Disney, where you might just happen upon a character you wanted to see instead of having to wait an hour in line at a prescribed time to visit with one. 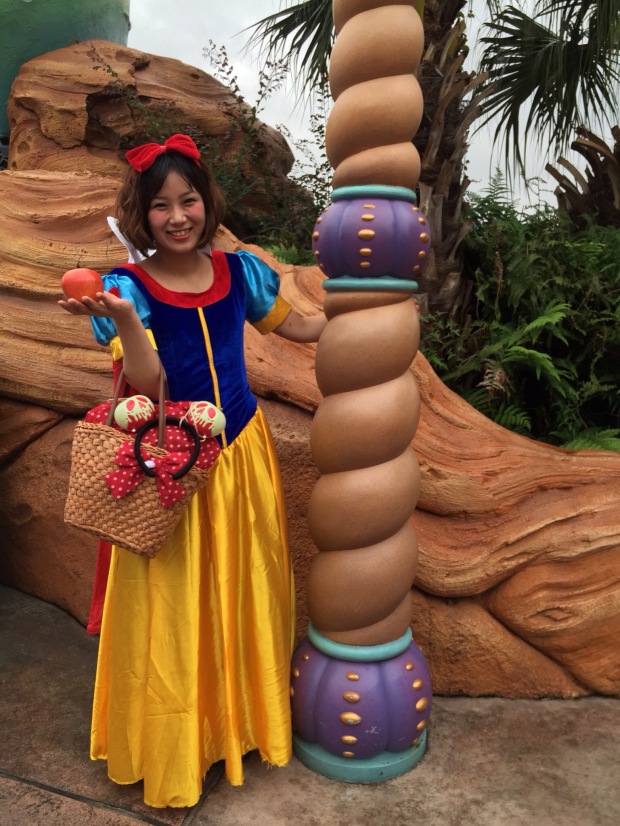 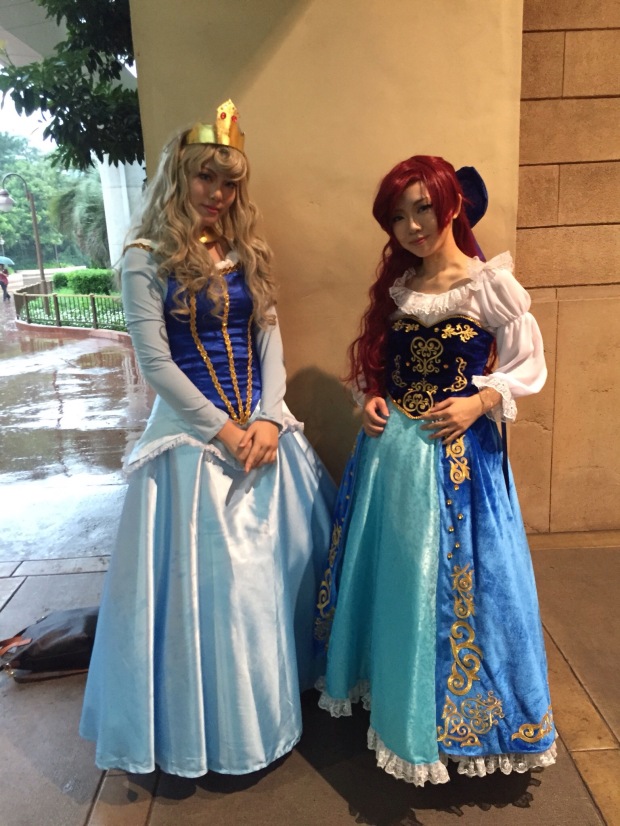 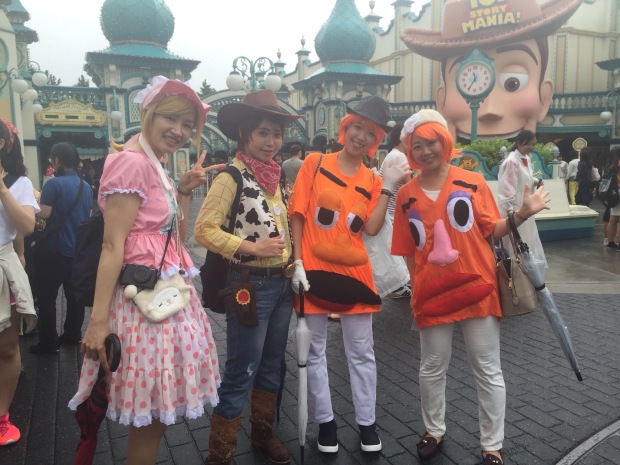 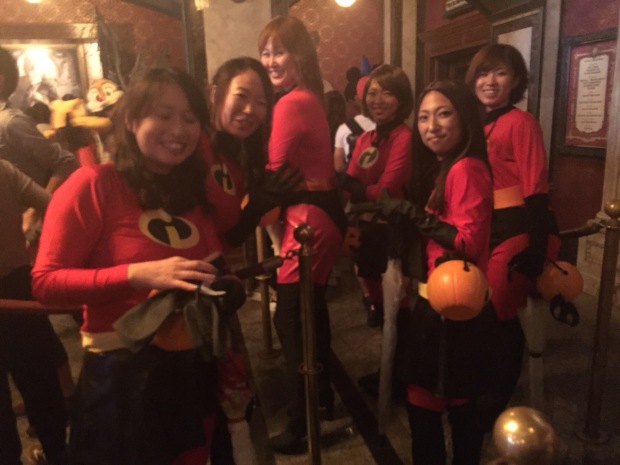 We ended up buying umbrellas as our rain jackets were soaked in minutes with the downpour, though these have been quite helpful for the rest of our trip thus far too. I won’t go into all the details of the rides and areas- it’s been done elsewhere. The girls favorite was the Under the Sea land, an indoor area entirely lit by blacklight, in psychedelic colors that makes you feel like you are really in the land of the mermaids. You could wander through Ariel’s treasure trove, Ursula’s lair, and get caught in Eric’s fishing nets. 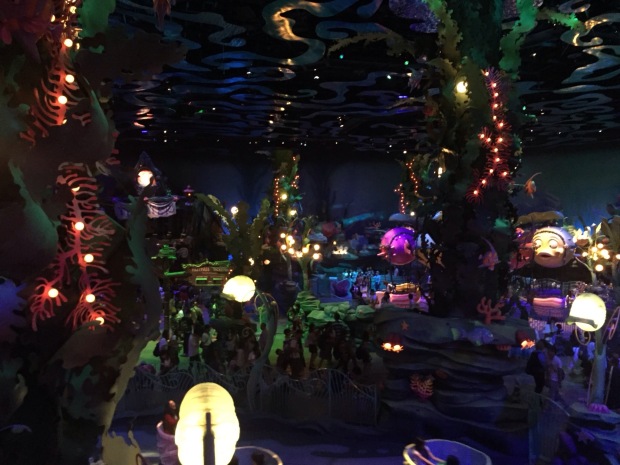 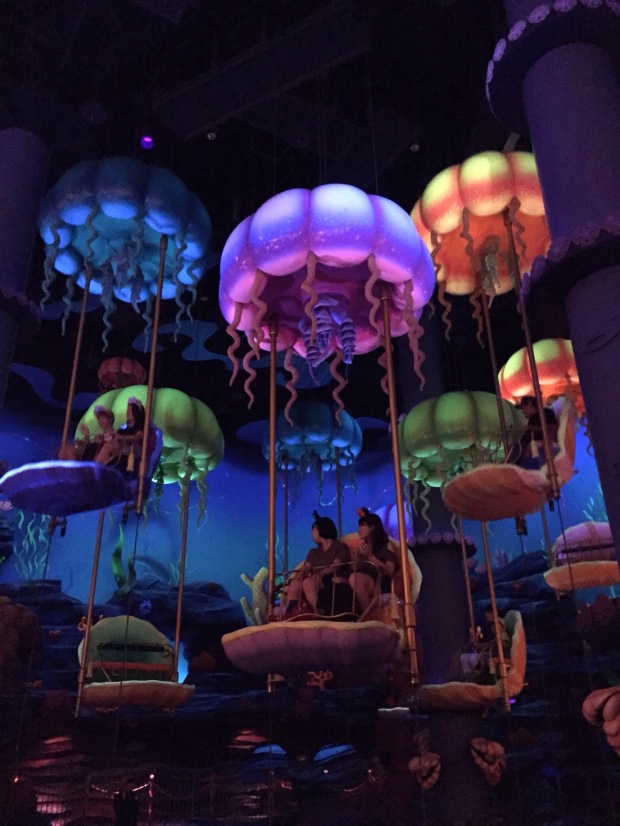 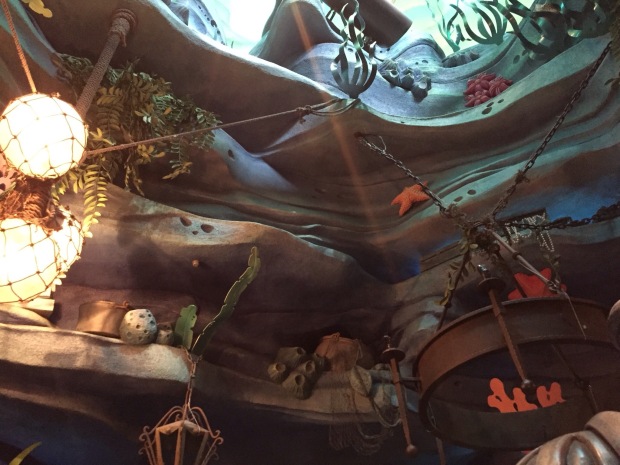 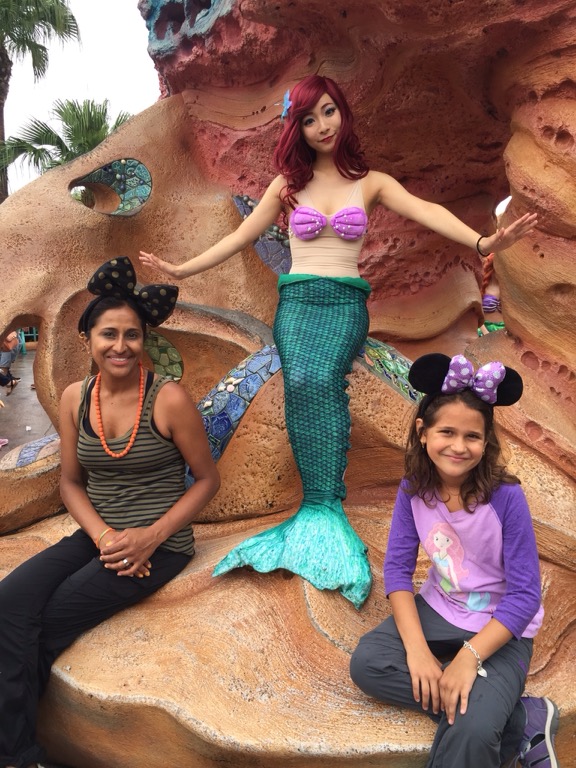 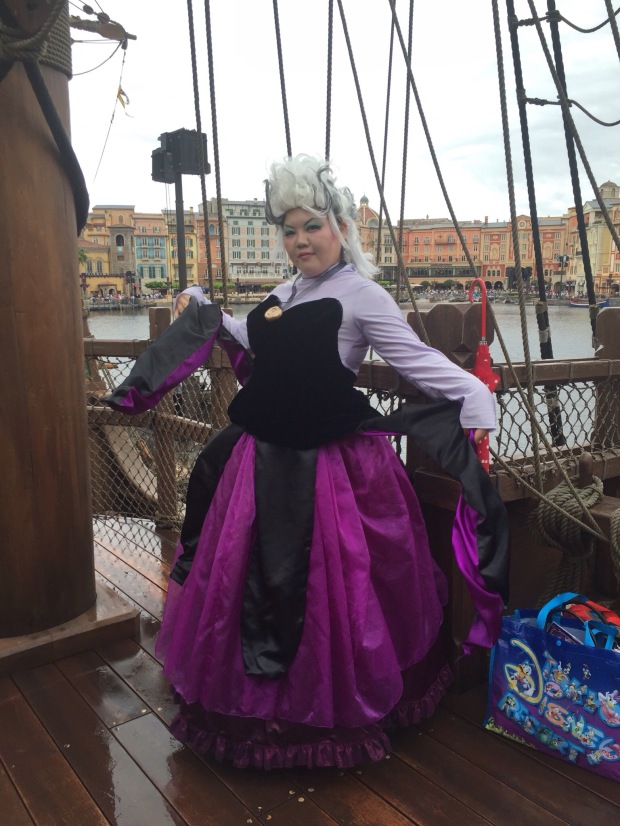 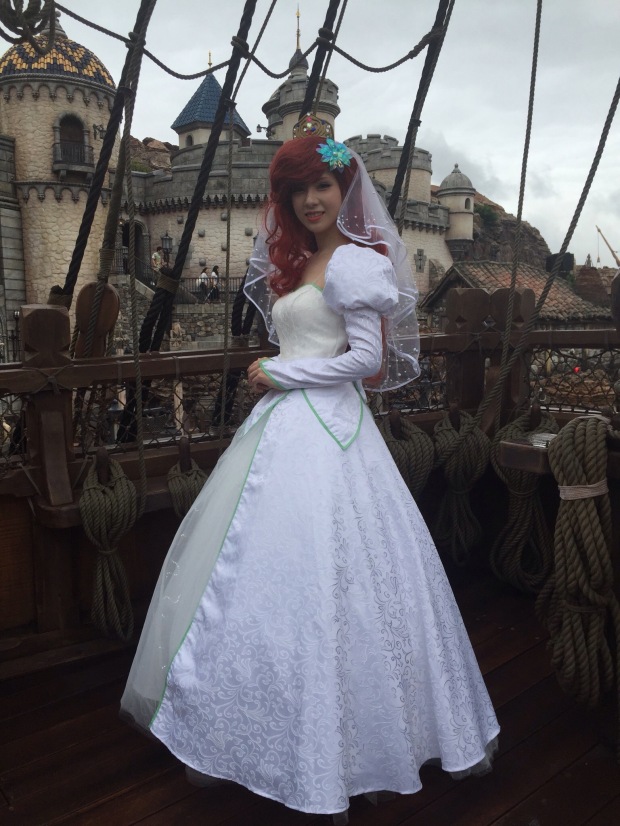 The boy’s favorite was a medieval castle that you could run around and explore, with rooms filled with different scientific discoveries! From the movement of the planets with a giant orrery to a pendulum clock to a huge camera obscura and turrets and cannons to fire, we spent well over an hour running around and gleefully happening upon surprises. 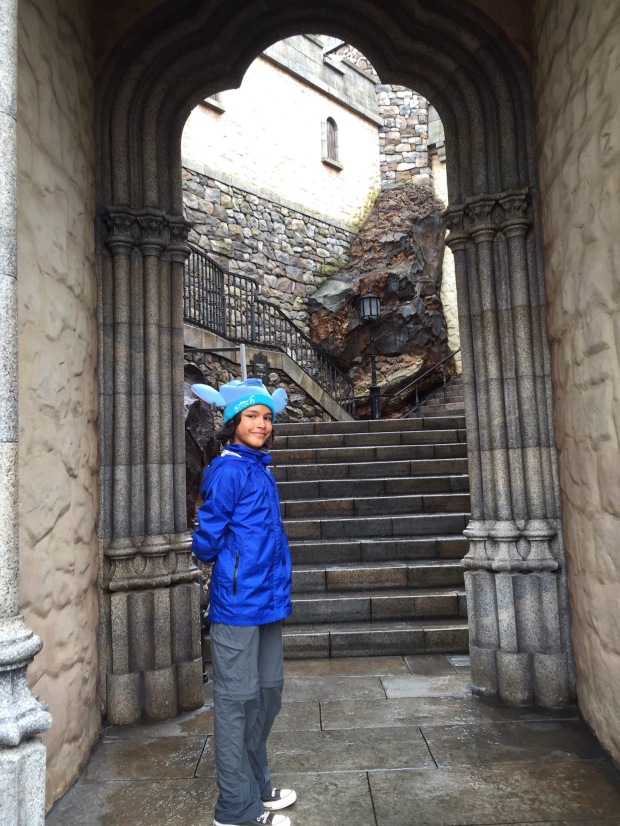 I also loved the Roosevelt lounge, an incredible bar covered in dark, decadent wood paneling with a big game theme, comfortable chairs and couches. We spent a good time there relaxing as once inside you felt as if you had left Japan entirely. Odd, I suppose, to have an entire lounge dedicated to an American President here in Japan when in America all we get is the incredibly dull president’s ride, otherwise known as the “ride where Dads can take a nap.” Here was a lovely area and the first decent Manhattan I’ve had since leaving the US. I may have had two, but who’s counting? 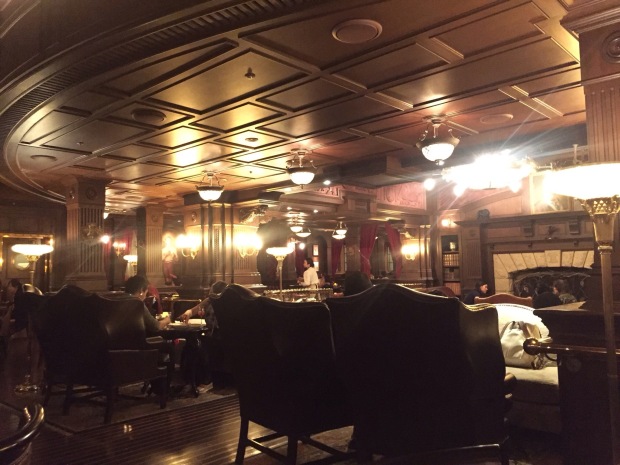 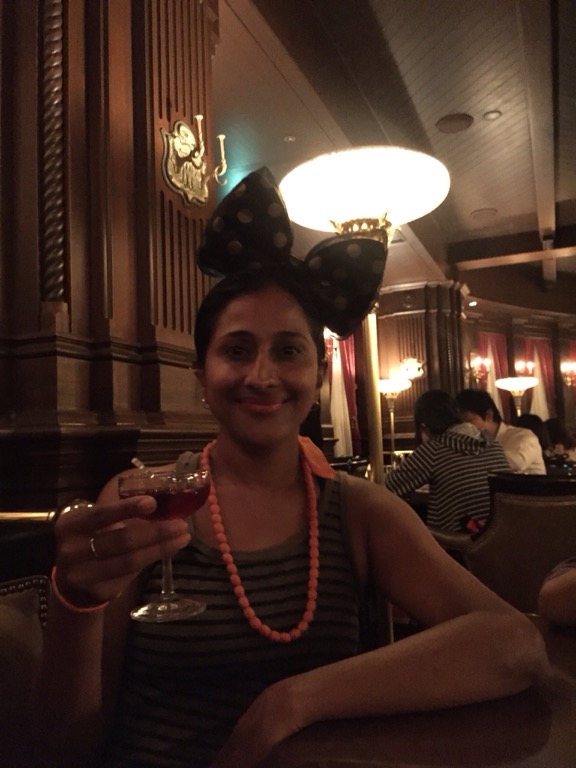 There’s fun food, too! Like frozen mango on a stick. 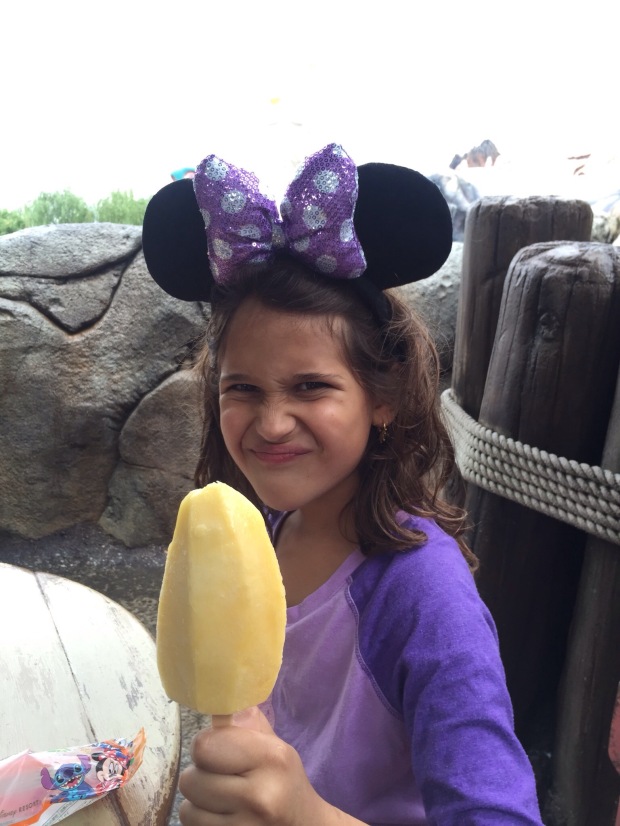 Wandering around the lands at night is even prettier, with the lights reflecting on the water below. 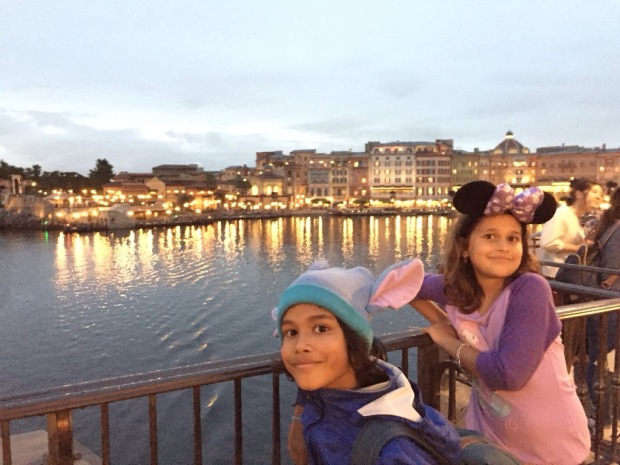 All in all, just incredible and I have to hand it to the Japanese to do Disney better than America. If you like theme parks at all this is a must visit, and I am so happy we made this a stop. Yesterday I just learned that there is a “Wizarding World of Harry Potter” here too in Osaka! I mean, for the sake of cultural exchange, I think we HAVE to visit, no?
﻿ 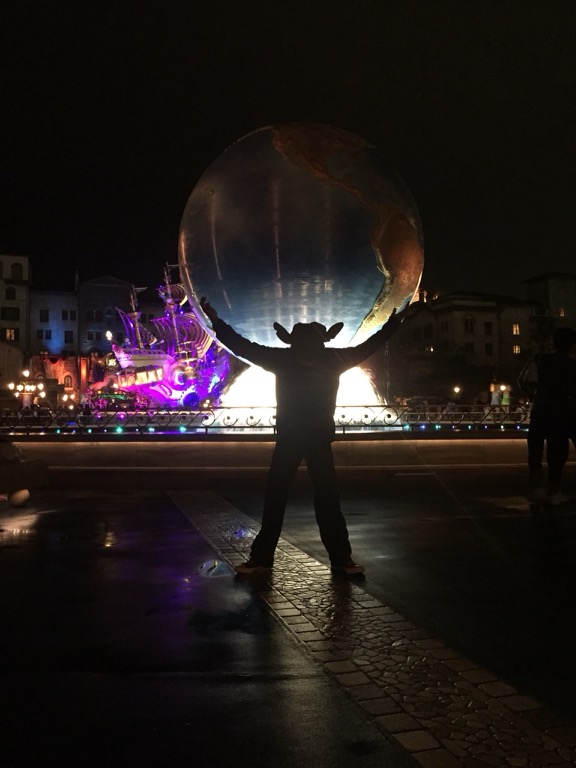