Time for the last leg of our Japan trip. We (okay I, Bataan death marcher that I am) decided that we would stop by Himeji castle on our way to Osaka instead of staying there and instead have four nights in Osaka and take day trips from there. We had hoped to visit Mt. Koya, a peaceful mountain where you can stay at Buddhist monasteries and is supposed to be beautiful, but here was one place where our on-the-go planning didn’t work out. They need at least one week advance notice prior to arrival, so, well, this was missed. Truth be told, I think we were all getting a bit tired of sightseeing and were ready for a few slower days anyway.
After leaving Naoshima we made our way by train to Himeji, the site of a large Samurai castle. After putting our bags in lockers we walked towards the castle site, planning on stopping at a noodle shop first, but it was closed. Now, while there are other noodle shops and such around, we’re a bit more limited in what we want to eat and like to have an English menu to choose from, which I’ll write more about later. After walking about and bickering for a while, we settled on a place that had salads and pasta and was generally underwhelming. One of the few mediocre meals we’ve had in Japan.
Himeji castle is the largest samurai castle in Japan, built for residency but also for defense. There are hidden windows to drop rocks on your enemies from, rooms to wait in to ambush enemies and of course rooms for the ladies. I particularly loved the roof end tiles which were decorated with  family crests. The castle had been destroyed in the war but a years long restoration effort has returned it to splendor. The castle was fun to walk around, though really overcrowded. As Eric has posted, modern Japan has been unkind to his head, and ancient Japan is even worse. After a stroll through the castle and serene gardens, we headed to Osaka and found our Air BnB, a three story apartment with thankfully high doorways and ceilings! Finally! 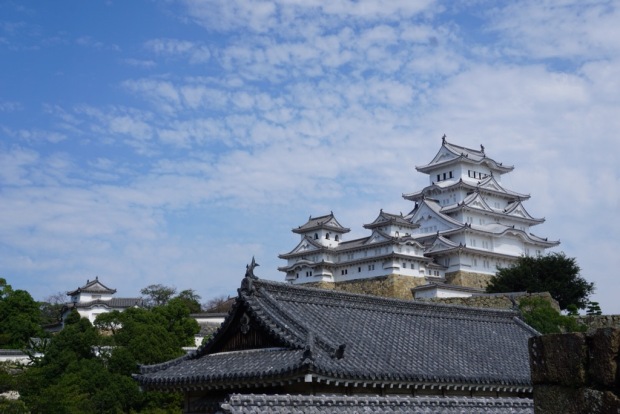 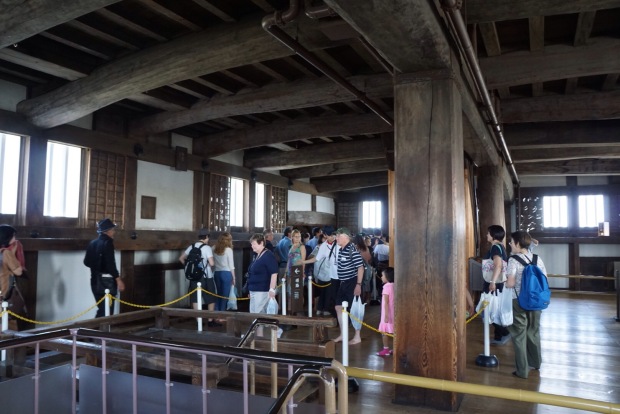 We woke late the next day and just had a rest day of sorts, walking around to continue what I now think of as “Eric’s Quest for Jeans,” and again failing. As Eric said, you cannot get anywhere in Osaka without walking through a shopping mall, and I unfortunately felt like we spent more time in malls then I wanted. I was able to visit one of my favorite yarn places though, Habu yarns or Avril as they’re known here, and pick up some lovely skeins. They’re known for all sorts of unusual yarns, and browing the shop did not disapoint!

See how this entirely independent store is just …. in the corner?

The initial plan for Monday had been to take the train to Nara, land of lovely parks and wild deer which frolic about and you can feed. In the morning, after having had coffee, the idea of taking a train to sightsee anywhere was not appealing. Add to that that the main draw in Nara is a large shrine and everyone just gave me a big stare when I mentioned it. Instead we went to the Harukas observatory, 300 meters up high. We had to go there to pick up our tickets for Universal Studios Japan (are you kidding? Of course I did! They have a Harry Potter World there!!) 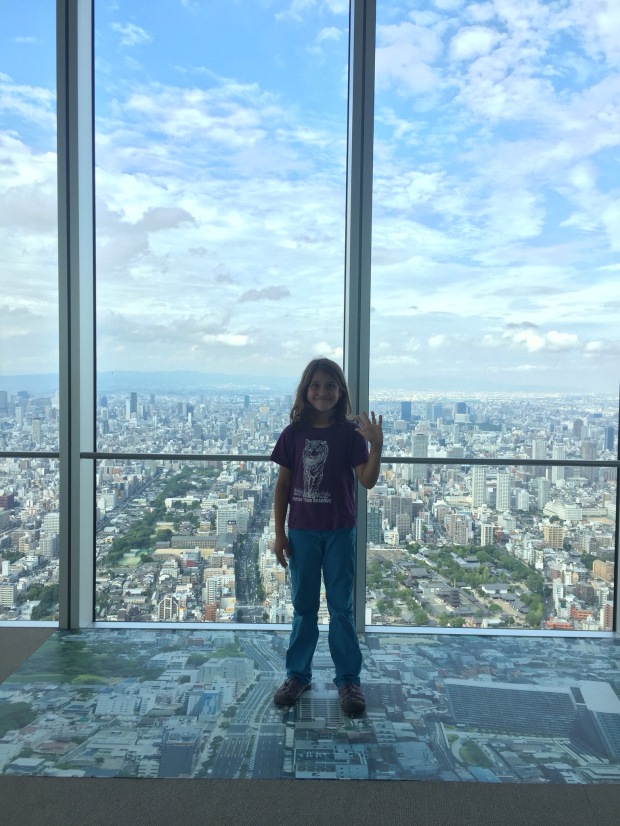 In a fun ironic twist, Eric doesn’t like heights and they make him quite vertiginous. Seriously. While the rest of us enjoyed the views of Osaka from up high, he went down to the cafe on the next level and stared at his Kindle, trying to ignore the fact that out the window was a long way down. Our next stop was the Dotonbori area of Osaka, which I liken to the Times Square of the area. Bright lights and big animatronic animals advertising restaurants, and lots of people. The only difference is that I think plenty of real Osakans head here all the time, unlike New Yorkers and Times Square. The most bizarre thing for me, however, was that there was a girl group performing at the riverwalk area – that in and of itself was fine, but across the river were grown men twirling towels around and cheering and actually weeping in joy at them. It was like the scene at an N*SYNC concert, only the performers were twenty year old girls and the screaming fans were middle aged men.  There was also a huge store called Don Quixote, that sold all sorts of random weird things, including some…questionably named men’s underwear. 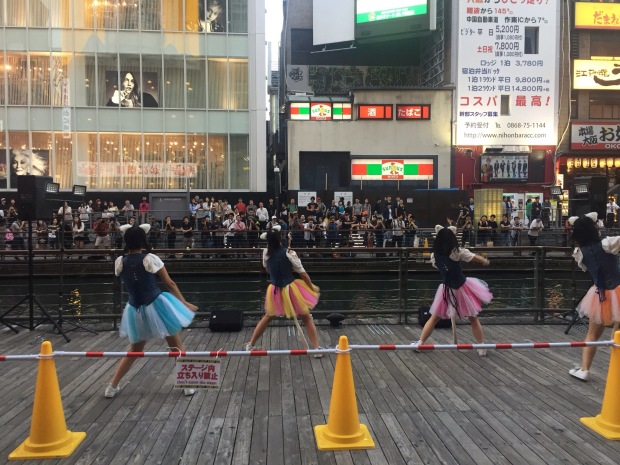 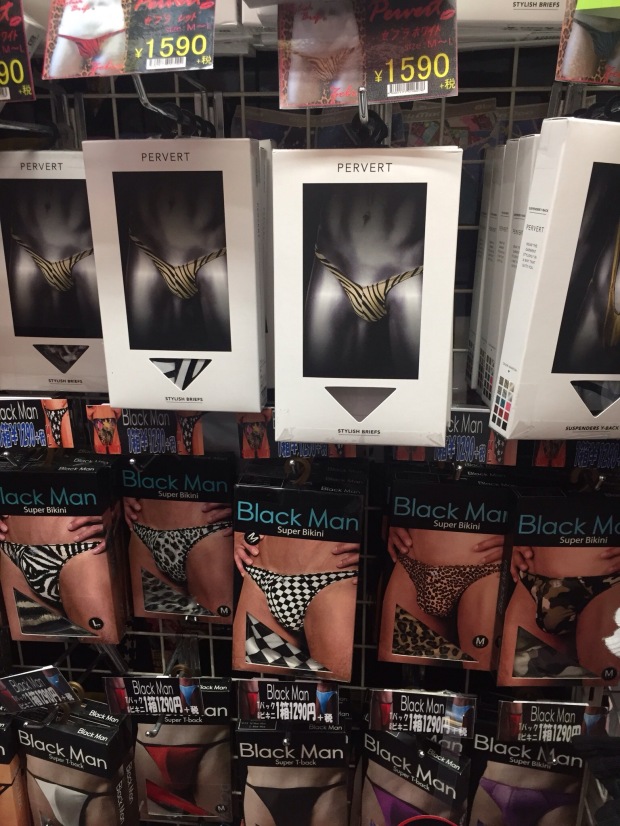 Eric couldn’t decide between the pervert or black man, so he got 10 of each

We tried to find a place to hang out and have a drink and some appetizers, but couldn’t find anything where the kids were welcome to come in with us. After some more fruitless wandering we finally just went to a soba noodle restaurant where we were warmly welcomed by the cook. They grind all their own buckwheat to make the noodles in house, and the kids got to try their hand at traditional grinding. Man, I am going to miss the food here.

quieter side street of dotonbori at night