Grocery shopping in any foreign country is always an adventure. First of all, you’re not sure where anything is and since you can’t just scan signs or aisles because of the language, you have to actually walk down each one and look at the pictures on merchandise to figure it out, given that you’re a functional illiterate. As a result, it takes three times longer than usual shopping. Most of the time it works out in the end, but sometimes you can end up with surprises like the time we thought we purchased tofu onigiri in Japan and it turned out to be mashed tuna. Things that you take for granted as being a typical food just isn’t so everywhere. Cheese in Japan was relegated to a small corner, and here in Romania things like fresh cilantro are nowhere to be found. On the plus side, Japan had more choices for noodles than I’ve ever seen and fresh sushi at the market and Romania has a ton of choices for sour cream, paprika and chocolates. If they’re on the shelves, that is.

In fairness, most shelves are well stocked.

You can use google translate, but other times even that doesn’t help. I wanted to get arborio rice to make risotto, but none of the “orez” was labeled as such, just had labels like “bob lung” written on it. Who’s Bob Lung? I wondered. (Means long grain, I’ve since figured out). Ten minutes of examining each individual clear plastic bag of rice to see which one looked like a short grain starchy rice, and found one called “camolino.” A google search and translate of camolino yields that it translates as….camolino. All the other pages were in Romanian. Another tricky one is the cheese – in the cheese section you’ll find a whole row of “branza,” “cascaval,” and “telemea.” Google will tell you that these are all “cheese,” so then you have to spend five minutes searching for the difference between them, staring at your phone like a moron in the dairy aisle while literate Romanians walk around you, grab their cheese and get out in ten seconds. (Telemea and Branza are feta like cheeses made from sheep and cow’s milk respectively, cascaval is a cheese akin to colby with a smoother taste in case you were wondering.)
As in Vietnam, you have to weigh your own produce at scales in the produce section, which spit out a sticker with the price on it. Thankfully, these are coded with pictures as well as words so it’s not entirely impossible. Fail to do so, and the checkout clerk will snap at you in disdainful Romanian, leaving you shamed in front of the line. God forbid you mistakenly identify your produce. There was a funky pear like thing here which I thought would be fun to try. I couldn’t find the sign for it so I just picked the picture that looked most like it on the scale and hoped for the best. The checkout clerk looked at my lone fruit in the bag and chattered at me in Romanian, clearly saying “This isn’t a pear, you fool! It’s a (something)!” And then she called a different clerk over who took the fruit away. I thought maybe he would weigh it correctly and bring it back, but no, it was simply not to be. No fruit for you! (I’ve since learned that it is a quince.) 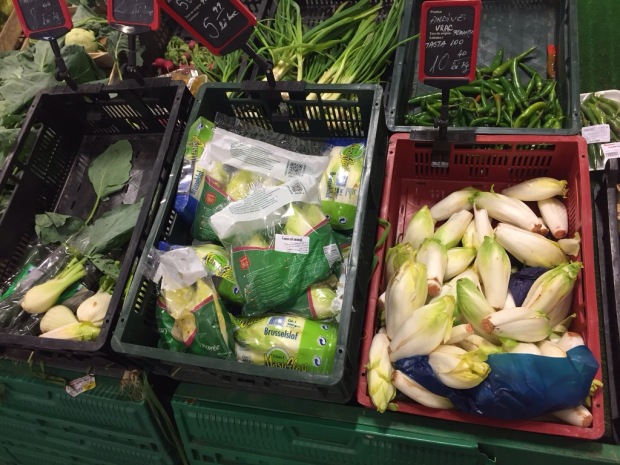 Produce is all largely unrefrigerated here, woe is the endive

The scale for weighing

The stores are not arranged in any logical order either. You enter and to the left is a section for produce, behind it bread and wine. In the center of the store and seemingly blocking your path to the other side is a labyrinthine section of spice packets and some noodles. Beyond those are school supplies. Between the school supplies and some cookies there is a narrow entryway leading you to the other side of the store where you’ll find the dairy section, rice, and beer. It makes absolutely no sense and half the time is spent trying to figure out where the hell you have to go to get something in the first place. 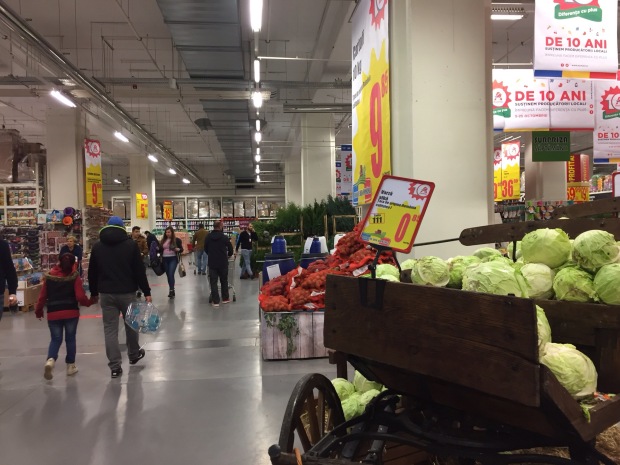 Special offers in the front, like a wagon of cabbage. To tthe left is an electronics section. The actual produce section is clear on the other side.

Even in different stores, the illogical ordering of stuff persists. One “hipermarket” which I think is akin to our SuperTargets has an aisle with plastic wrap, tinfoil, but also hideously ugly bathmats, bath towels, and random plastic toys. One cool thing – they sell the plastic wrap rolls and such separately from the boxes, which is a brilliant way to reduce waste, I think.

There are walls of mustard, yogurt, cheese, wine and beer at most places too. I love the “foreign foods” aisle, which stocks “oriental” food next to Swedish and British.

THE WALL OF MUSTARD 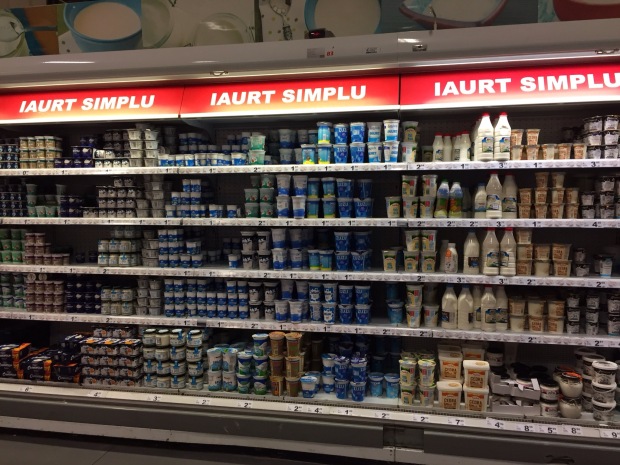 THE WALL OF OF PLAIN YOGURT. there isa nother wall for flavored yogurt.

The final gauntlet is the checkout line, which I have yet to see be less than five people deep, no matter the time. The clerks pick up each item, rotate it maddeningly slowly to find the barcode, then slide it over the scanner before moving it to the other side where you bag your own groceries. I have never missed the self checkout lines more.
Despite all this, I’ve managed to make some nice meals here with some twists! I couldn’t find ground coriander at first, so I had to make do with a meat tenderizer and a plastic bag. No chocolate chips exist, but that’s easy to do with just chopping up bars of chocolate. I don’t have any real measuring cups but using mugs works just as well and estimating spoon sizes has been fine too. 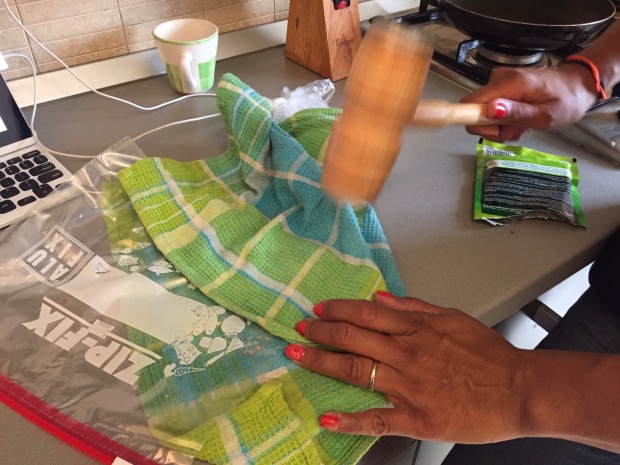 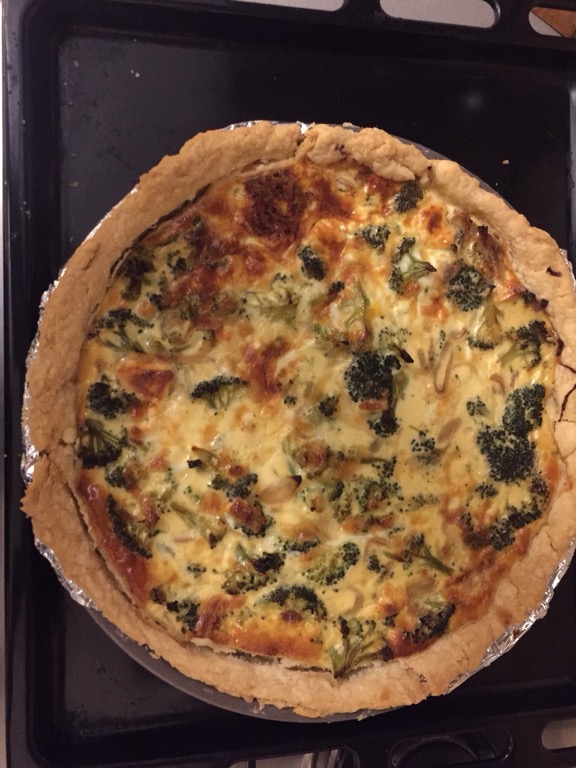 No poli to be had, so I made some! Not bad for a first try