We get a lot of questions about how we’re educating the kids. Aren’t you worried about them falling behind in school? How do you know they’re learning anything? Do they need to prove anything to the school when they return? (The answer to that last one is no) And sure, we’re doing some academic formal schooling, but sometimes the lessons are those that come from just being somewhere else.
Yesterday, the boys went off to a yoga class and left the girl and I for a little time alone. After a bit of reading, we thought we’d engage in the classic teenage banter of “I don’t know, what do YOU want to do?” Mulling over the park (too cold), the mall (uh, no), we settled on baking. Initially, I chose a salted caramel brownie recipe but then the girl saw a link for key lime pie, her and her brother’s favorite. I thought we should make it a little easier and go for bars instead, and off we went to the grocery store, shopping list in hand. Limes, butter, eggs, gingersnaps, cream cheese, sweetened condensed milk. A few veggies for dinner too.

She insisted on putting the coin in for the shopping cart herself. Here, the carts are chained together to prevent theft, and to use one while you’re in the store you insert a 50 cent coin that you get back if you reattach them.

We got into the store, crowded as usual, and set about to find our ingredients. Limes were the first one. Would they be next to the lemons and other citrus fruit? No. Near the refrigerated section? No. Would we have to abandon our mission? No, we kept looking and found them tucked in between the ginger and the pomegranates, in what I think is the “exotic fruit” area.

Butter, eggs,cream cheese were no difficulty. The next barrier was the gingersnaps. Walking through the aisles, none were to be seen. We thought, maybe we’ll substitute with graham crackers, but again no familiar boxes of grahams, even after studying the pictures. We settled on McVitie’s digestives, a crumbly round biscuit that resembles graham crackers, though doesn’t have their cardboard like properties.
Then came the sweetened condensed milk. I actually thought this wouldn’t be a problem since it seemed to me preserved canned milk would be common for a prior Communist state, and headed for the packaged milk section to look for the familiar cans of Carnation. Of course, none were to be found. We searched the baking aisle, the sweets aisle (all on opposite sides of the store) and then one last search in the milk section. In the States, if a certain store doesn’t have an essential ingredient I’m looking for, I tend to do one of two things. Either I give up on that recipe for the day or I just get in my car and drive to another store where it will be and I can be out in five minutes. Here, it’s a bigger deal. If we wanted to go to the bigger store, at the mall of course, it’s a half mile walk and far more crowded. It would take us an hour. The girl, undaunted, was all for the extra effort of going, just to be able to make our recipe. One more desperate scan in the milk aisle showed me two bottles that looked like they had condensed milk. Was it sweetened? Who knows – the nutritional info label, in German, was covered up by a sticker in Romanian that I couldn’t translate.
We made our way out of the store, not before being veggie shamed by the checkout lady as I thought the cucumbers we got were priced by the number, not kilo, and got home.
The milk was just evaporated milk as it turns out, so I looked up how to make it into sweetened condensed, which involves a little sugar and and a lot of simmering. While that was happening, the girl got the other ingredients going until it was time to crumble the cookies. Lacking a food processor or blender, we crumbled them by hand until we had a relatively fine meal, using the flat side of a meat pounder for the rest. 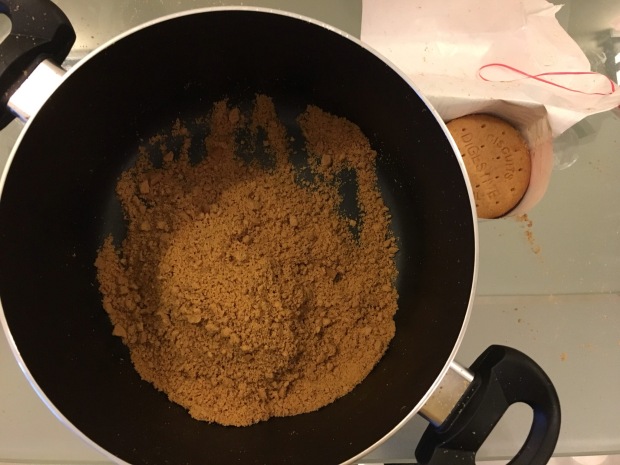 We don’t have a 9×11 pan, but do have a tart pan so used that instead. No mixer to beat the cream, so did it with a hand whisk, triceps aching by the time stiff peaks formed. Had to figure out what the oven temperature should be in celsius to set it correctly. Melted butter in a pan on the stove as we don’t have a microwave. Throughout all of this, not one peep of complaint or whining from the girl, even though this was much harder than it would be at home. 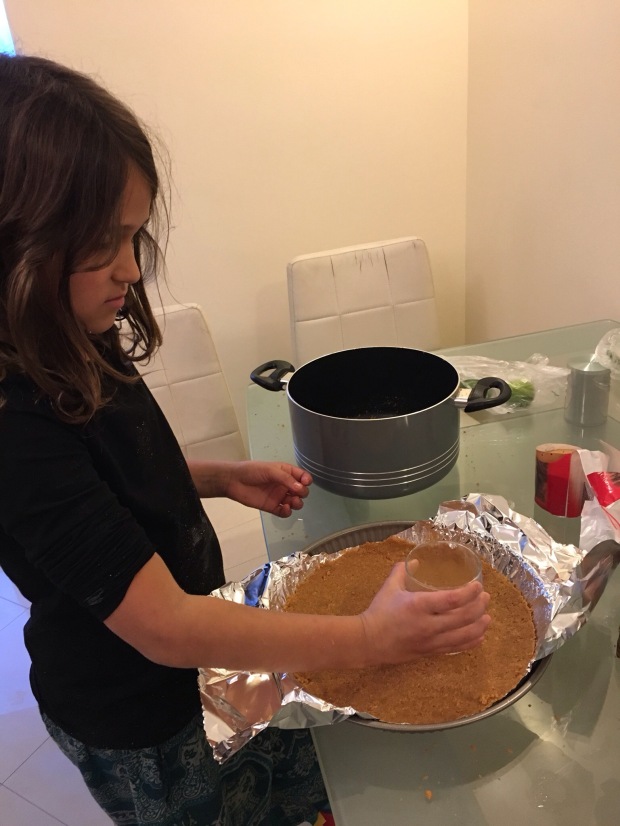 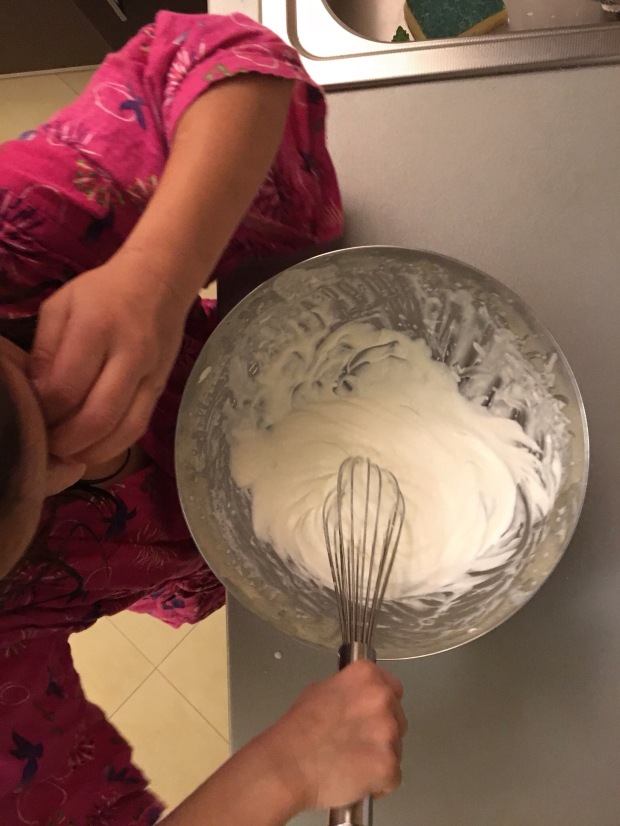 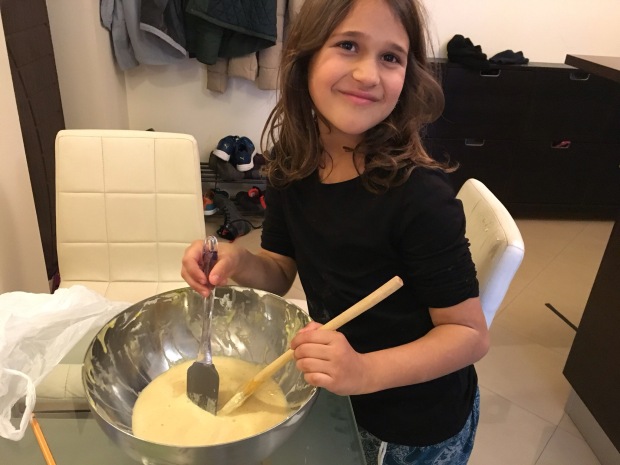 In the end, it all worked and we had some tasty lime bars. Sorry, this is the only picture I was able to get before the hordes gobbled them up. 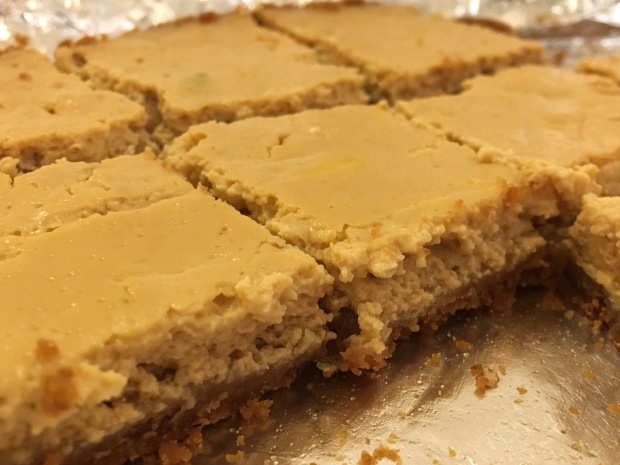 My point is this – one thing you can’t learn in a school is the essential lesson of learning how to figure something out. Maybe things don’t work exactly as you want or expect them to, maybe it’s harder than you anticipated, but you learn to make it work. I think it’s hard to do this in your familiar environnment as you know how things work and it’s set up for you. If I were Romanian and coming to the States, I’d be lamenting how to substitute for smantana and papanasi mix instead – it’s not about US vs other, it’s just about being somewhere where things are unfamiliar, being away from home.
More than all the history and the culture, it’s things like this I think are the true value of leaving home, stepping outside your comfort zone. So while my kids may be missing out on watching a bean seed soak in paper toweling and sprout or making a solar system model out of styrofoam balls, my hope is that the lessons they are learning make sure if they ever need to figure something out, they’ll know how to.