Venice, I think, suffers from what you can call anticippointment. All the lovely pictures of it, the hushed tones in which prior travelers speak of it, you expect to fall in love at first sight. And while it is indeed very charming in a way, it’s also so overrun with tourists that there is currently a 7:1 ratio of tourist to resident. Much of the time I was in Venice it felt like an Italian Disneyland, a picturesque city with its unique canals, there for tourists to take pictures of and party in, more than a feeling of true culture and interest. Many of what I suspect used to be small local stores have turned to selling the same cheap chinese factory produced crap as everywhere else because that’s what makes enough money to pay the inflated rent.
That said, it is spectacularly pretty. No roads, no cars, and no bicycles, the only way to get around is to walk or take a boat. The narrow canals and bridges between buildings are something to see and experience. Our first evening there we decided to go for a walk around, just to explore. Our Air BnB host had suggested a small wine bar that had been in operation since the 1400s, and we popped in for a beverage. I love the little paths that just end in water, and the small little shops and bars you can find around. It’s verifiably labyrinthine however, and even a good map isn’t much help. The streets turn this way and that, going directly straight is impossible, and it’s hard to keep your bearings when you can’t see anything in the distance. We got entirely lost on our way back home, only finding our way by using Google maps and the compass app on our phone. 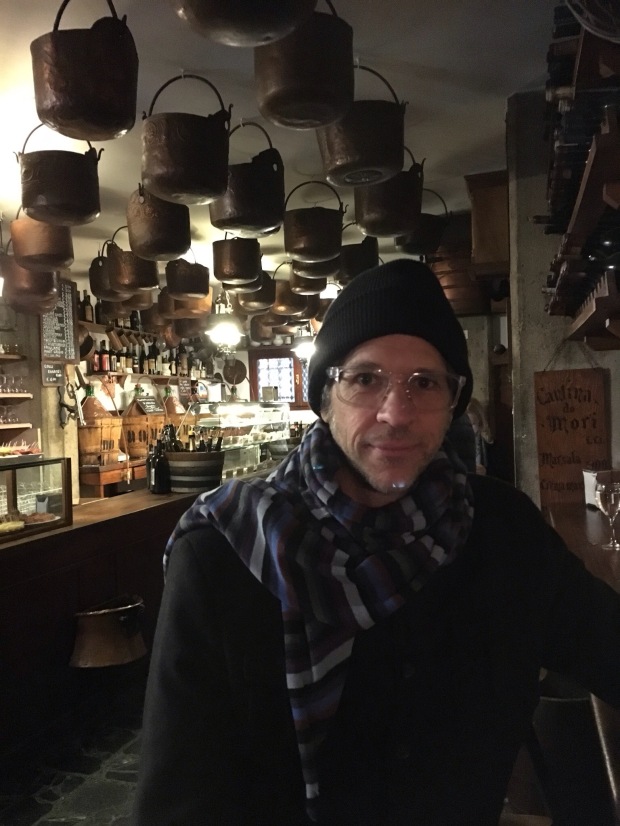 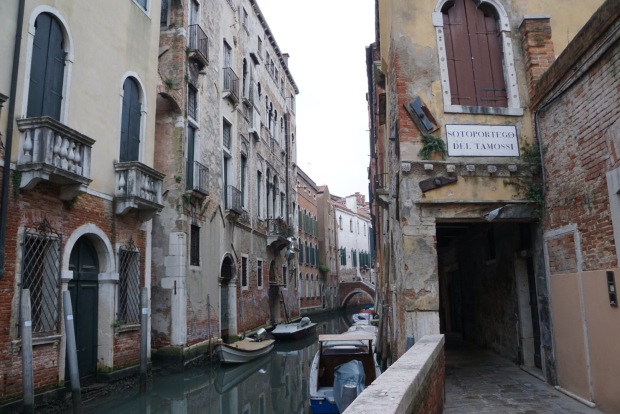 We awoke to visit the main tourist sites, the palace and St. Mark’s basilica. The cathedral is, again, stunning, this time interesting for the Eastern influence on the artwork inside. Instead of painted frescoes, the ceiling is entirely covered in glittering mosaicwork. Instead of the usual Western style cupolas which have straight walls then meet to a point at the top, these are Eastern with bulges in the middle, think like the Taj Mahal. No photos inside, unfortunately.
We went to the palace and signed up for the “secret spaces” tour, which takes you into the jails and torture chambers hidden in the walls of the palace. The kids got to reenact scenes of torture, perhaps a bit too delightfully. We learned of the history of Casanova, who was jailed in that prison for quite some time before managing a daring escape. We saw rooms of inquision, floored with dizzying tilework intended as a mental game to disconcert the accused. Our tour guide was sprightly and engaging, but it couldn’t change the fact that a 16th palace’s dungeon has poor insulation and we were frigid by the end of it.

We warmed up with lunch and I tried an aperol spritz, a drink of campari, sparkling wine, sparkling water that is touted as a local specialty. Friends, I wasn’t impressed, though it could just be that it’s a summer drink and what we really needed was some nice mulled wine. The drink was garnished with an olive, and when the owner came to take our glasses away, he gave Eric a stern look as he had not eaten the olive garnish. Eric only cares marginally for olives, and so smiled and said “no, it’s okay, okay to take the glass.” The owner continued his stern look and pointed at the olive. Keeping eye contact with him, Eric slowly took the impaled olive out of the glass and ate it, the owner responding with a satisfied look and a hint of a smile. I made a point of showing him that I was eating the olive in MY glass, which was clearly the right path to take.
We considered a gondola ride for all of ten seconds. At 80 Euro for 30 minutes, it’s not a cheap proposition. Also it was freezing outside, and I could only imagine 30 minutes of yelling at the kids to stop moving or keep their hands in the boat or not play rock the gondola, and I figured I can do all that for free. We did take a short gondola ferry ride, just for the feel of it.

That evening we met up with a student of Eric’s who is currently studying in Bologna and had taken the train out to Venice to meet us and see some friends. We asked around and were sent to a small street on an out of the way part of Venice where there were some (good) little wine bars, small and unpretentious and not facing a large boisterous pathway. This was my favorite part of Venice we’d seen yet. Away from the highly commercialized center (Disney Store, for goodness sake) and from the crowds of progressively more drunken tourists, you could sit in peace and have a beverage while looking out at the canals.
So Venice, I may be back, I’m not sure. If so I’d stay further out of the main area, in the fringes where it retains its charm and some of its culture. I’ll leave with my favorite detail about Venice, the doorknobs which are situated in the center of heavy wooden doors, like Hobbit holes. 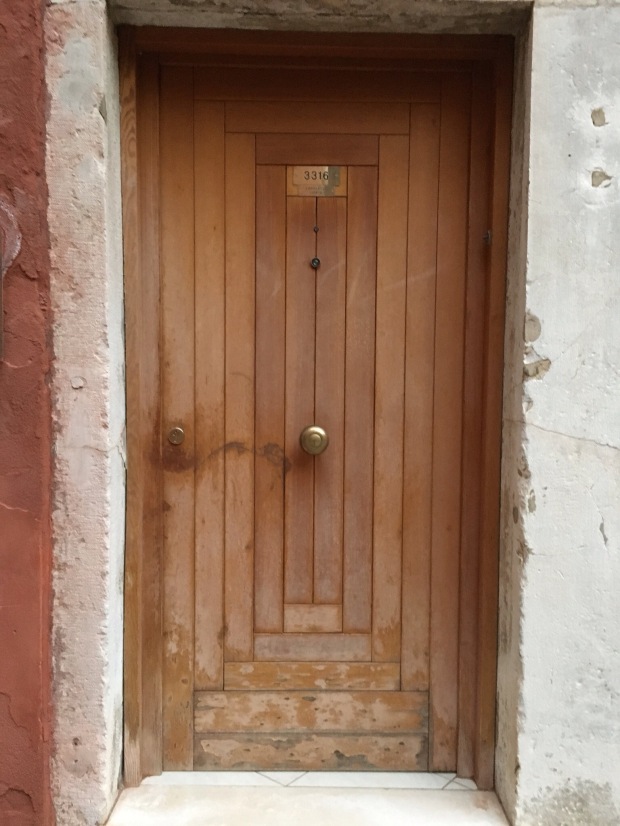