I love having my nails done. Something about it just makes me feel like even if the rest of me is falling apart, at least I’ve got one little piece that’s put together. Most of us have something like this, whether it be having our hair done, or having a book with us at all times, or wearing a hat, or having a notebook or what have you. I had never had a real manicure until medical school, when my friends Rebecca and Doosa, upon learning this, looked upon me with wonder and pity and promptly booked an appointment. Since then I’ve never looked back. Frivolous, I know, but there you have it.
When we arrived in Romania, one of my first orders of business was to find a nail salon. At first, I was so intimidated by this, as I often was when we first arrived here. I didn’t know if there was different etiquette here, or how to communicate exactly what I wanted. I ended up choosing a place at the mall with good reviews and walked over. Inside was a clean area, lit with bright lights, six or seven nail stations at which were seated women in various stages of nail perfection. All turned to look up at me as I walked in and chatted with the receptionist, which made me feel a bit like a spectacle. At the far end of the room was a tv bolted near the ceiling playing pop music videos in English and Romanian, lending an air of familiarity to the place. As they were busy, I made an appointment to come back to have a manicure with someone named Carmen. Now, I actually know a Romanian Carmen at home, and she is no one to be messed with. I was soon to find out that neither was my new nail tech. 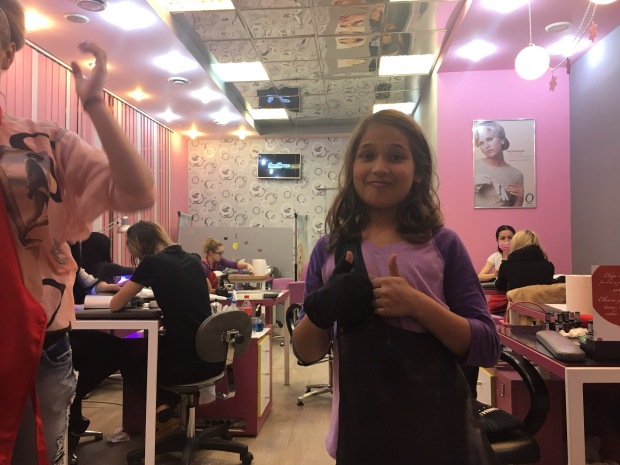 I went back at the given time and sat down in the chair, and was offered a cafe which I accepted. Carmen sat down across from me, a serious looking young Romanian woman with crimped bleached blond hair. Not saying much, she began to inspect the state of my fingernails. They were somewhat of a disaster. Some had broken off nearly entirely, others were cracked. Her eyes widened, the corners of her lips pursed and she held up the stubs and said, “What can I do with this?” “Well, just leave them and they’ll grow” “It won’t look nice,” she admonished, “I will have to cut them all.” Foolishly, I thought I would still be able to get my way and said, “No no, just leave them.” After a few minutes of shaping while continually sucking air in through her teeth, she stopped. Holding up my fingers in front of me again, she said sternly, “Do you see, it won’t look good! When I do a job, I do it from my soul! I want it look very nice for you.” Okay, okay, I acquiesced. I mean, I didn’t want to be responsible for a stain on Carmen’s soul. This was also the moment when I knew I really liked Carmen. Anyone with that degree of decisiveness is always a winner in my book.
Out came the clippers, efficiently slicing all the nails down to fingertip length. I have to admit, she was right and they did look better that way. I later tried to tell her only to cut the cuticles a little bit, but again this didn’t go far. After one round with nippers, there was another round with a pair of very sharp scissors. Enough dead skin piled on the table in neat little strips that I thought it could be an effective weight loss technique if done on a regular basis. 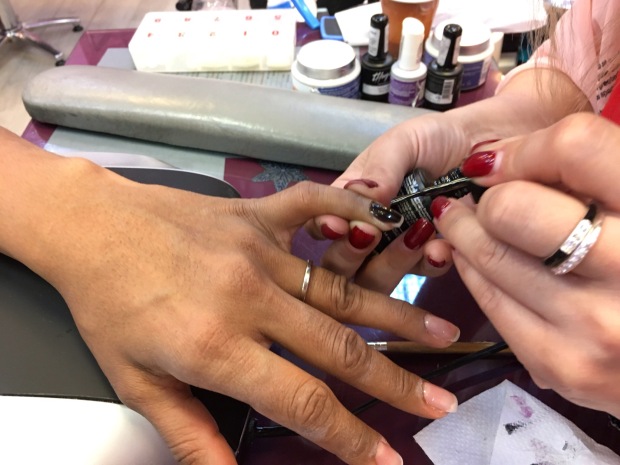 Intermittently during our first appointment, we would have a conversation in broken English. I learned she had a six year old daughter, I told her about our time in Romania and our travels. Around the shop, the nail techs chatted amongst themselves in cheerful Romanian, clearly trading gossip and ribbing each other in a friendly way. Every now and then Carmen would shake my hand gently and tell me to relax, which happens to me every time I get my nails done. After the fifth time of this, she threw her head back and smiled and said “Oh my god!” In a rather amused, exasperated away.
The color I chose was a difficult one, requiring several coats to become opaque, unlike the usual two. Later on, I asked for a design on one of the nails. She brought out a big set of stamping plates and laid them on the table as she continued to work. I saw a nice little feather design I thought would be cute and waited until she asked me what I wanted. This time was not to come. “I choose for you,” she announced, poring over the plates until she made her decision and then stamped a nice little wavy design on. It was quite nice, actually, and our visit ended with a picture of my hands for her portfolio.
Soon it was time to go back, and of course I booked with Carmen. I had to again face the disappointment in her face when she saw another few broken nails. Sighing heavily, she brought out the clippers to cut the rest of them down. She offered to make one of them longer instead, but I declined and opted for the cut down. “What color do you want?” She asked with trepidation.”Not the same one as last time?” Clearly thinking of how long that one took to go on. “No,” I said, “just black this time.” “Black?” “Yes.” “Okay, if that’s what you want,” her eyes widening slightly and with a upturned tone to her voice at the end of the sentence, in a way that made it clear I was unwise to want this, but this time I felt pretty sure about it and didn’t give in. This time we chatted a bit more, and it was nice to be in the midst of a pleasant sussurus of women’s voices in the clear tones of gossip. This time I was allowed to choose one of my nail designs and she picked the other.
The last time I went in was yesterday, the girl accompanying me as the boys had other plans for the day. When I’d made the appointment a few days ago, the receptionist knew me and immediately turned to Carmen’s schedule to see when she was free. On arrival, I was greeted warmly by the staff and then again tutted over by Carmen for the sorry state of my broken off nails. I showed her a picture of the polish pattern I wanted, and she said definitively “I will have to do a few tips.” Now, I’m not usually one for fake nails of any type, and the last time I had them may have been my wedding, but by now I learned that Carmen knew best. Besides, since I’m not working I figured there was little harm in it for now. (Medical providers usually aren’t allowed to have any type of fake longish nails because of the increased bacteria risk, but moreover it’s entirely impractical. I mean, I don’t think my patients would take kindly to being stabbed during an exam.) She turned to her colleague and they had a rapid discussion in Romanian about the best way to achieve this, and ten minutes later I had a full set of perfectly long nails. My daughter peppered her with questions about the process as we went on, clearly not approving of the nail tips, narrowing her eyes at me as they went on. Then a discussion on how to achieve the french manicure type look I wanted, only with black and gold. She painstakingly applied the polish so it would be perfect. One one nail I wondered if a stripe could be thicker. “It won’t look good!” She rebuffed. And that was that. When she was nearly done, about an hour of work later, I said to her as a joke, “Uh, I don’t like this color, can you redo it?” She looked at me with her eyes wide, mouth partly open and nostrils flared in a “Oh-no-you-didn’t” sort of way, and I burst into laughter “I got you!” And we both laughed about it while she related the story to the tech next to her in Romanian. 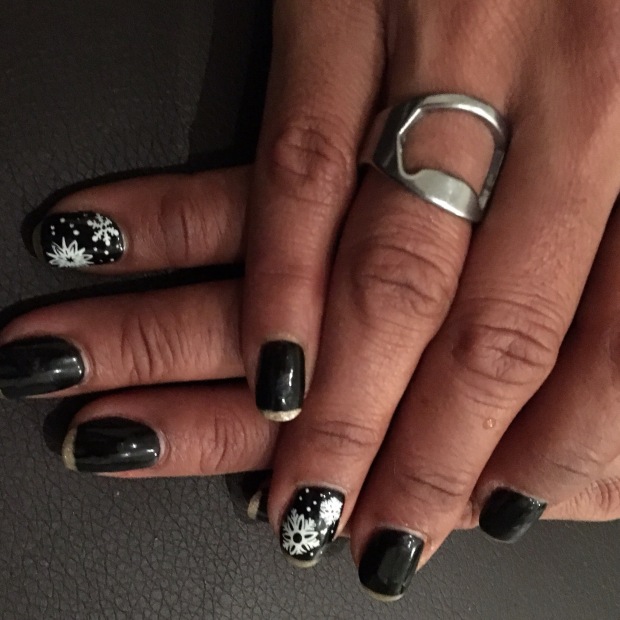 At the end, she said, “I want to do a design for you.” And pulling out a plate of snowflake patterns she applied them to my nails as she chose, with the overall effect lovely and seasonal. I told her we were leaving Sunday and we hugged. 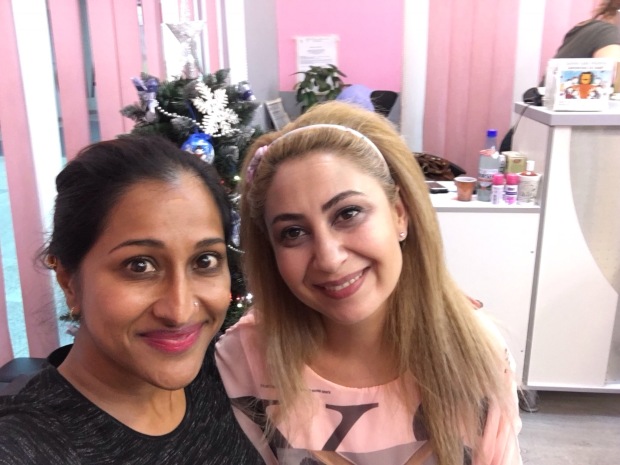 It’s a small thing, like I said, but these interactions are what make me feel like we have a sense of community here in Romania and things I will truly miss. The evolution of my experience at the nail salon reflects my overall experience with Romania. Initially nervous, then more comfortable and even welcomed. After being on the road for several weeks and feeling unrooted, we come to this unlikely place and end up finding places where we have friends, make connections. Viniloteca, the local bakery where we pop in nearly daily, the gym, the nail salon. I finally feel like I have a general sense of how things work, and don’t feel quite so nervous about trying to interact with people. Not surprisingly, this means that the people I interact with are generally friendlier and more open that I found them at the beginning. I suppose in a way this means we’re all mirrors, that someone has to be the first one to open up and smile before others can.
-s