The initial plan for our break between Romania and Ireland was to travel to India. I thought we’d have a good four weeks there, but the Romanian refused to give us the dates of winter break until after we’d arrived, so we learned late that it would only be two and a half. When we were in Budapest we tried going to the embassy to get a visa, only to be met by a malodorous clerk who informed us, after an hour of waiting in a small cheerless room with a random table of Ayurvedic products for sale, that it would take five weeks. Then when I looked at tickets to a visa on arrival airport instead, they came to about $2000/each, putting them well out of the budget for this year. In hindsight, what I should have done was get a year long visa while in the States and then buy tickets the minute we had our schedules in hand. Live and learn, and perhaps we can make it happen next year with better planning.
We decided instead on a shorter hop to Spain, and using one of the discount airlines in Europe (the somewhat off-color named “Wizz Air,” not joking) got a ticket from Romania to Valencia for $31 each. We pulled into Valencia in the evening, and even after the sunset the warm air was a relief from the frozen air of Timisoara we left behind. I’ve learned to book a certain type of neighborhood for us now – one that’s closeish to downtown, not in the main tourist area, residential, but still with shops and restaurants nearby, honestly similar to our own neighborhood at home. Here in Valencia, that neighborhood was Russafa. It was once a downtrodden area, but has been revitalized thanks to an influx of artists and city planning which has created more pedestrian friendly zones. 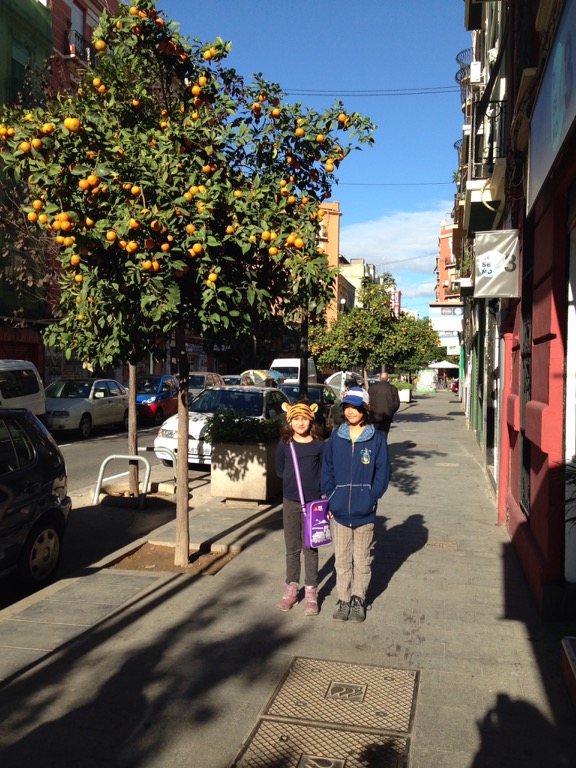 The next morning Eric picked up a plate of incredible pastries from Dulce de Leche, a delicious coffeeshop/bakery down the street and along with coffee at home we had a breakfast feast. It was a rare rainy day in Valencia, so with our trusty Tokyo Disney umbrellas in hand, we made our way Eastward to the Jardin de Turia park and then the Science museum. The Turia river had run through the city of Valencia, but after recurrent flooding was diverted and the riverbed converted to a large green space that snakes through the center of the city and ends in the City of Arts and Sciences buildings, including the science museum, aquarium, theater, and Imax among others. 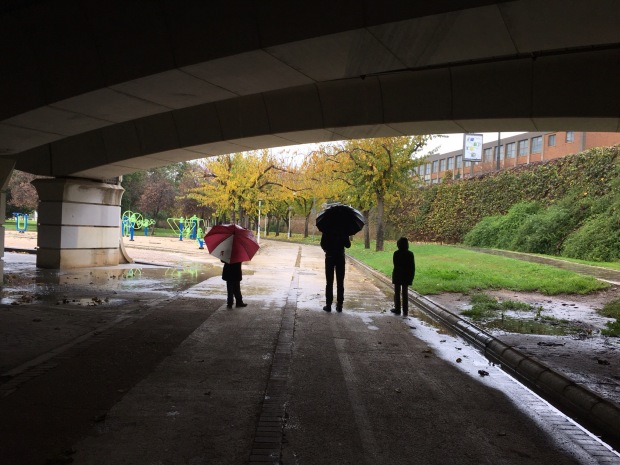 The buildings are a futuristic collection of metal and glass by Santiago Calatrava and Felix Candela. Locals hate them because they cost a fortune to maintain and are in continuous repair. The project also came in far over budget and is a symbol of government financial waste. As a tourist, however, I have to say that they are impressive.

The science museum was, well, adequate. Having been raised on excellent science museums, and having the highly interactive Denver one at home, I expect more than what we saw here. There’s a section called the Exploratorium, and it has a collection of the exact same experiments as the one in  San Francisco, where I spent many happy hours as a kid and, well, also as an adult. The activities are spread out in awkward ways and not well explained at all, a true disappointment when you know the magic and wonder of the original.. An exhibition on Tesla detailed his unappreciated discoveries and feud with Edison, who comes out of the whole business looking like a real jerk, but there was little to interact with and the exhibit was mostly a lot of text on the walls of the museum. Exhibits are dual language for the most part, and we used Google translate to fill in the rest with mixed results. My favorite one was where they had chicken eggs in various stages of hatching. I’m not sure, though, what happens to the chicks afterwards. I suspect a well fed reptile nearby. A pleasant way to spend a rainy afternoon, in all, but I don’t know that I’d recommend this museum as a must-see. Had the weather been more amiable, exploring the park would have been nicer.

We hopped a bus home and left the kids to relax while Eric and I went out for happy hour. We’ve been doing this a fair amount on our travels to everyone’s benefit. The kids get to watch TV, we get a little time alone, then all join up for dinner, happy for the breaks. I would have thought that by now, the kids would have learned how to walk, but they are incapable of it. Always stepping on my feet, or suddenly cutting in front of me and causing me to trip and fall, or pushing me into the street, or walking in front of me and then stopping abruptly, or even running into people on the street because they aren’t watching where they are going. Sometimes I slow down a bit to let them get some space, to no avail as they also slow down and remain six inches in front of my feet. It is a full time labor of attention to simply walk with them and a relief to get a break for an hour and just enjoy the ambiance of walking around a city without it feeling like an obstacle course.

I knew that restaurants opened late in Spain, but I wasn’t really ready for the reality of it! Many don’t open their doors until 8 pm, and even more don’t open until 9! It took some getting used to, but our schedules have adjusted to this eating schedule a bit – we wake up around 8 am, putter around until 10, have a late breakfast, late lunch, snack and then dinnner. The weather is mild and even at 9 pm you’ll see a lot of families out and about.

The next day I was forced to stay at home for the morning due to some more poor planning on my part, namely waiting until the last minute to order our rail tickets which have to be delivered to a physical address. Eurail passes are in general not that great of a deal anymore, unless you happen to have kids and then you get a “kids travel free” pass where you only pay the reservation fee for the leg of the journey, so we still opted for them. My forced torture of being home alone, no bickering of children, being stepped on, having to answer constant questions, just…peace and quiet. I don’t know how I survived it, but readers, I perservered. I met up with the kids and Eric later for some delicious veggie paella and we spent the rest of the day ambling about the neighborhoods, with the orange tree lined streets. Fun fact: Valencia oranges were actually developed by a Californian agriculturalist and have nothing to do with Valencia, Spain.

Battle of the Graffiti

Valencia overall is a wonderful smaller city to enjoy and explore! It reminded me a lot of cities like Portland, Denver, and Austin in a way – not as massive as the level A cities, but more inimitable and full of character.