Lisbon reminded me of San Francisco, with its steep hills and angle bottom houses hugging each other in a line, the foggy mornings and misty bay. The Golden Gate bridge replica, built by the same architects to cross the bay, adds to the similarities. My favorite Lisbon detail was the tilework seen covering many of the building walls throughout the city.

9 of my favorite tile patterns seen throughout the city 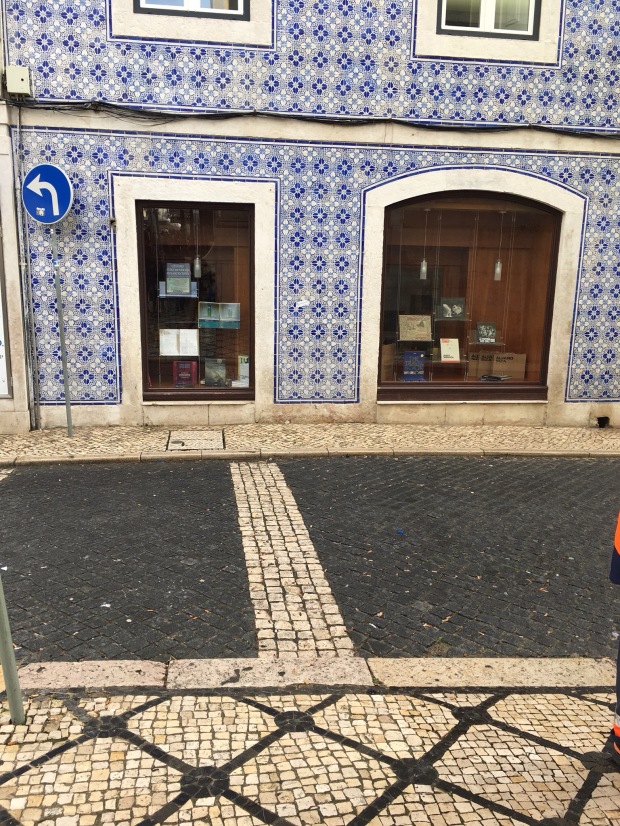 Tiles on the building, patterns in the cobblestones. Lisbon is a delight of visual decoration

Now, a true tourist trip to Lisbon should include a visit to the areas of Belen and Sintra, home to beautiful architecture, Unesco world heritage monasteries and a top class modern art gallery. But we were all travel weary, tired of sightseeing, and just didn’t have any motivation to hoof it out to the suburbs. So after the first day which Eric describes, we just wandered around the city for the rest of our time there.
There’s this cool food hall in Libson that has apparently been purchased by Time Out Magazine, where they have many different delicious food stalls surrounding a central dining area, brightly lit and with a large glass skylight overhead. I had pictured a nice walk down there, showing it to the family where we would ooh and ahh over the options, then sit down for a fun meal. What happened instead is that Eric does this thing where he chooses or forgets to eat a meal. This results in hungry Eric. Hungry Eric is a grumpy, snappy Eric who then makes poor food choices. We ended up eating pad thai, which wasn’t bad actually, but I was too annoyed to enjoy it properly. Sigh.

We rambled our way up to the Duque Brewery, where Eric only consented to go inside if we called it “Du-kay,” not wanting to even hint at the evil University that shall not be named. Delicious beer and we made some delightful friends from Britain who were in Lisbon for New Year’s and I hope that we manage to meet up with them again too!

We’ve settled in Maynooth, Ireland now, about 40 minutes outside of Dublin. I feel like we left these dense urban landscapes and woke up in small town Oregon. The house is a roomy three bedroom duplex, and it feels like we can stretch out again, unpack and set up a house for living, not just staying.  It’s taken some doing to get the house put together, with a lot of time spent running errands and getting things like linens, dishes, and food. We couldn’t have done it without the help from the people at Maynooth University.
You can tell a lot about what a country prioritizes by its grocery store, and Ireland is no different. I realized that I hate the first time I go into a new grocery store in any country. It’s disorienting to say the least, since nothing is in a familiar place. The kids were along for the first visit, and add to the mental chaos as every five minutes they chirp about something that’s caught their fancy (look! Harry Potter yogurt!), but has nothing to do with the red bell peppers I’m actually hunting for.
Here’s the flour. Divided into cream flour, plain flour and strong flour. Strong flour? I think it means it’s got a higher gluten content but I’m not sure. I didn’t think I could handle it so I opted for the more compliant cream flour instead.

Wall of baked beans, revolting. Sorry to the Brits and Irish, it’s an acquired taste. Also “salad cream,” not sure what that is either. It’s NOT mayonnaise, since that’s on a different shelf. A wall of custard and a TON of prepackaged jello.  I couldn’t find any ricotta cheese, but if you want cheddar in all Irish varities, you’re covered. 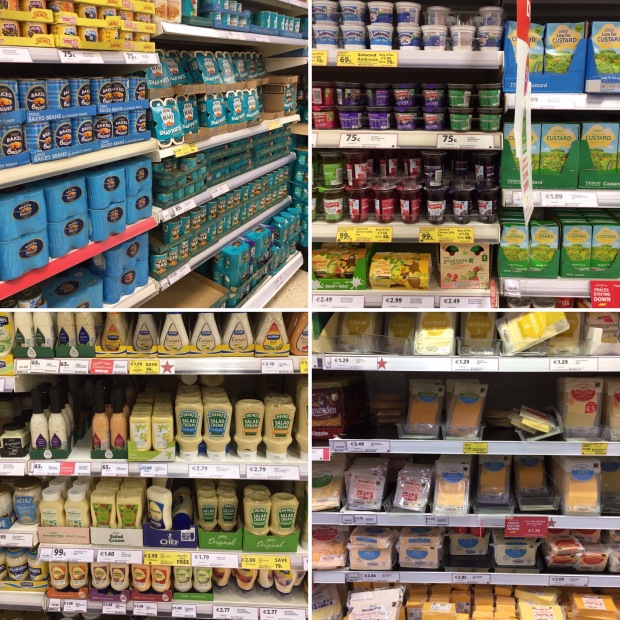 And of course, and ENTIRE freezer bin aisle is dedicated to potatoes of all types. 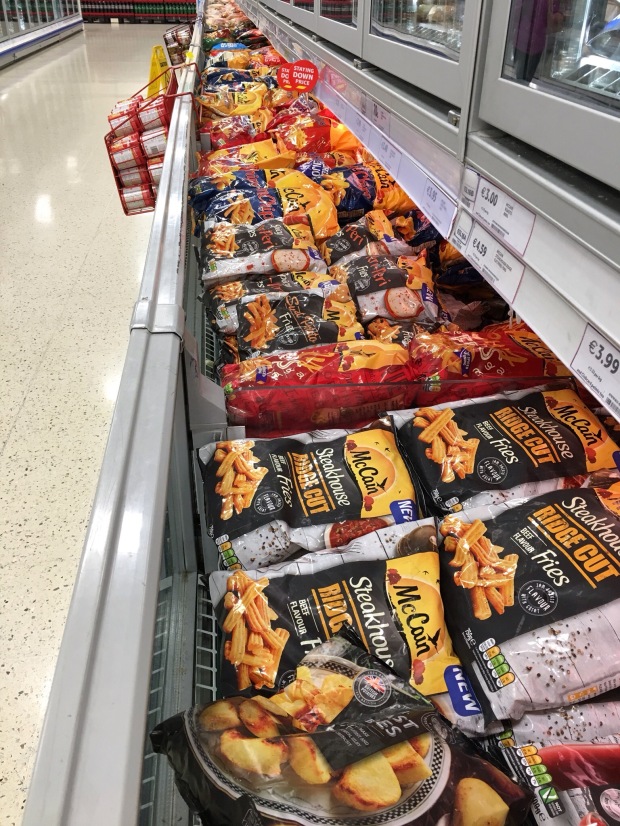 So far our welcome has been warm and people are really friendly and helpful. I keep wanting them to talk as much as possible just so I can hear the Irish accent. They also really say things here like “You’re grand” for “that’s fine, don’t worry!” And my favorite “I’m only delighted” pronounced “I’m onie deloyted” and it is just so cute. I know, I know, I shouldn’t make broad sweeping generalizations and I know Ireland must have it’s share of rude and mean people too, but I haven’t met any yet.
The kids have started school too, separate schools for boys and girls. They are so happy to be back in school again, and having homeschooled very lackadaisically for the last five months, I have confirmed that you have to be either slightly insane or a very different person from me to want to do that full time, so I’m only delighted too. (See how Irish I’m becoming??) They’re learning a bit of Irish in school, and come home with their newest words. The girl loves not having any boys at school, as she now doesn’t have to spend recess coming up with attack strategies to ward off the packs of chasers as she did at home.  The boy, however, misses the balancing energy of having girls in the school, and finds the place a bit rowdy. He’s learned that he is terrible at Gaelic football and also terrible at soccer, at least how it’s played here, where the ball is largely kept up in the air by skillful feet and hardly gets a chance to roll on the ground. I’m sure he’ll slowly amass a cadre of nerds and reestablish his D&D sessions here. The girl is also making friends in her class. I do have to say that I think she is in a class too low for her. The age cutoffs are done differently here, and the work she’s doing seems to be far too easy for her. The class above is full though, so we’ll just have to supplement on our own.
I can’t believe how quickly it feels like the last five and a half months have passed, and that we’re at the midpoint of our year away. We’re all of us happy for the time we’ve had, and also to slow down for a while and catch our breath again too, with the new experience of small town suburban living, which will be its own adventure as well.