I’m going to be honest with you here, and share what may be an unpopular opinion. Upon hearing that we were going to go to Ireland, many people would get slightly misty-eyed and exclaim, “Ah, Ireland! I’ve always wanted to go there!” Or alternatively “Oh I love it there!” reflecting on happy times spent on the Emerald Isle. “Yeah, I can’t wait.” I would lie halfheartedly. So here it is – I was just not that interested in Ireland.
I mean, I thought of it as a place of grass and sheep and shamrocks and Guinness but still Westernized and English speaking, and as such not nearly as interesting or different as say Japan or Spain or anywhere. I usually am excited to go to new places, so I’m not sure why I wasn’t really thrilled to come here in the first place.

But I’m here now, and given that I know little about the history or the culture, when the opportunity came up to take classes at the University, I jumped for it. So I’m now taking a full course load on Irish culture and history, of course. Sapana says that this means I’ve failed at my goal of being a lazy, bonbon eating, soap opera watching housewife, but I’m such an overachiever that I think I can be BOTH a lazy housewife and a full time student. Being a student again is SO FUN. Partly because it’s been almost 20 years since I’ve been in a humanities course, and it’s the first time that I’m learning something purely for fun and grades don’t really matter. It’s giving me a new appreciation for the culture and history here too.

The courses I’m taking are: Intro to Irish Culture, The Irish Manuscript Tradition, Heroic tales (myths/legends) and Archaeology and History of Newgrange, which is an ancient tomb site. I’ve had a few classes so far and am loving it. Where possible, I’m going to try and weave in some of the things I’m learning with the sites we’re seeing around Ireland to give it more background.
We’ve been taking almost weekly trips into Dublin to see the sights there, and it’s a lovely, if not drizzly, city situated on two banks of the Liffey River. 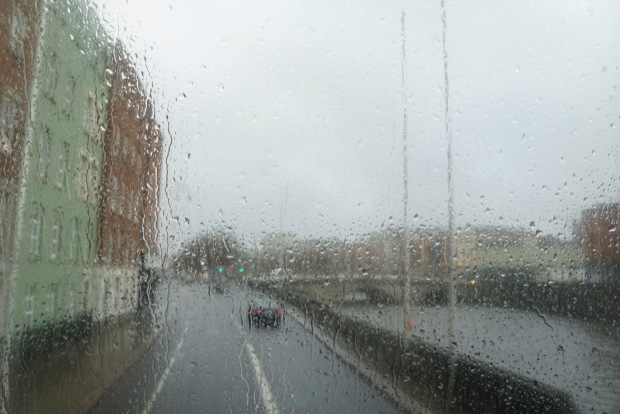 The name of the Liffey comes from “Liphe,” meaning Life. The buildings along the banks are generally brick and mortar in the older districts, notable for windows that get smaller as they move skyward. One of the main tourist attractions in town is Trinity College, and specifically going there to see the Book of Kells and the Long Room of the Old Library. Trinity was established in 1592 as a Protestant only institution, only allowing in Catholics beginning in 1793, and not women until 1904.

A book of the gospels of Matthew, Mark, Luke and John, filled with intricate drawings and lettering, believed to have been written around 800 AD, and has somehow survived the years. It really is magnificent, and the exhibition that precedes it does a fantastic job talking about the manuscript tradition in Ireland and the hisotry of writing in general.

While you can’t take pictures of the Book of Kells while in the exhibit, here’s the entire manuscript online. I recommend. checking out the following folios (folio is the word for page, r means “recto” or right side, v is “verso” or reverse) – for images, 28v,, 29r, and 291v. For a nice example of illustrated lettering, check out 182v.

Whatever else they may have brought, the Christians coming to Ireland brought with them writing, which previously had only existed as rudimentary stone markings known as Ogham. Some of the earliest known writings are from St. Patrick himself, but do not include a recipe for green beer. From around 500 A.D., they established monasteries and scriptoriums, where scribes would copy out various works. These ranged from religious texts, to legal notices, and some myths. For many Irish scholars, the Book of Kells is indeed quite pretty, however the real interest and cultural history lies in the manuscripts that tell olden tales of yore, such as Lebor naHuidre, or “The Book of the Dun Cow.” After all, it’s pretty easy to get your hands on a copy of the gospels to read, but finding ancient texts that describe historical and mythical tales is rare. Many of these manuscripts were not cared for as the Book of Kells, and have been found in various stages of decomposition in the airless bogs of Ireland when peat farmers excavate the land.
These have lasted partly because of the oxygen deficient environment of the bogs, and also because they are written on vellum, made from prepared calfskin from a calf no older than 3 months. Any older and the skin is too tough to use for bookwork. Here’s me in class holding up a sheet of vellum, it feels almost like a thin, flexible plastic.

When the professor said she was passing around the vellum, a blond girl behind me started squealing “Awe, calfskin?! That’s so sad! We have to touch it? Ew, I haven’t even had lunch yet!” I couldn’t take it. Turning around, I glared at her, “Do you eat meat? Are you wearing leather, because if so, you’re already touching cow skin.” “Well,” she replied lamely, “I’m, like, half vegetarian…” But at least it got her to shut up about the vellum. It was incredibly cool to get to feel up close this ancient material, imagine the scribes sitting down with a new fresh sheet, ready for inking.

The ink came from various minerals and natural substances and were quite laborious to prepare. Oak galls for black, colored lead for reds and whites, copper acetate for greens. Quills came from geese or swans and were cut in precise ways for the different letterings. Styli would be used to draw lines on the paper to keep things straight, and they would also use markings as placeholders for larger first letters or large drawings.

A fantastic interactive site about manuscript writing is found here: Making Medieval Manuscripts.  It’s done like a fun little game and worth five minutes of your time to see how they’re made. My favorite little tidbit about these is that the scribes would often write little snarky notes in the margins, such as “Now I’ve written the whole thing: for Christ’s sake give me a drink.” See? Medieval scribes were just like you and me.

After the Book of Kells viewing, you walk through a narrow passage to enter the Long Room of the Old Library. Friends, this feels magical to walk into, as if you’ve stepped into a past time where bald pated scholars in robes would carefully examine the leather bound tomes held within. Two floors of wall to ceiling books and busts line the central pathway. A security guard gave the boy’s hat ears a friendly flick as we walked by, and we stopped to ask him if the books were still read. Indeed they are, by appointment only. A copy of the 1916 Proclamation of the Irish republic resides here as well. 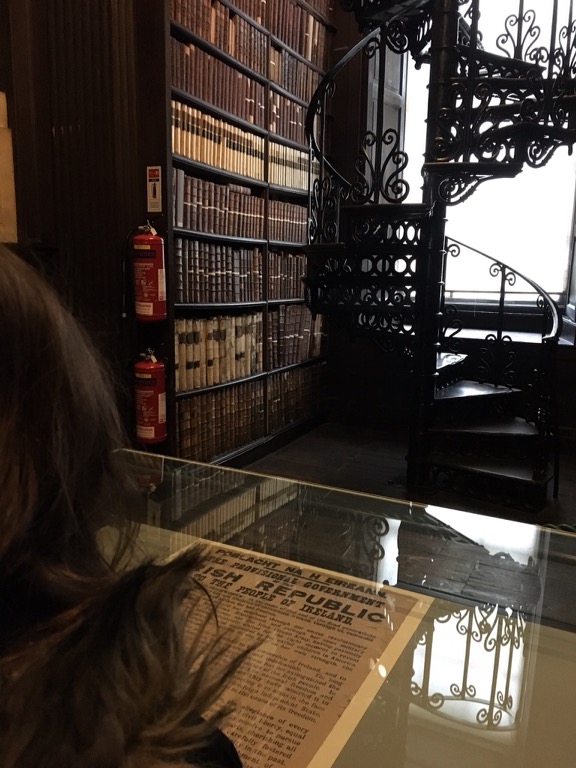 The Jedi Archives in the Star Wars prequel movies looks almost EXACTLY like the long room, such that the college considered a lawsuit against LucasFilm, but the producers of the movie said that the Long Room wasn’t the inspiration, so the college basically decided to drop it. You be the judge, but I think the college would have had a preeeetttyy strong case here.