19 years ago, I travelled solo to Europe in the summer before starting medical school. One of my favorite memories from that trip was having a picnic lunch on the Champs des Mars park in front of the Eiffel tower with a gathered  crew of like wanderers from the youth hostel. The girl has also had a lifelong (9 WHOLE YEARS) wish to visit Paris and see the Eiffel tower. Thus, I decided to end our year with a week in Paris. But then it turned out we could spend a few days in Reykjavik on layover on our way home, so that changed a bit. But that’s a story for another blog post.

We flew in relatively early, landing in Paris before noon. The first thing we saw was sunshine, glorious glorious sunshine, and coming from Ireland we nearly lay down on the airport sidewalk to soak it up, but thought it might be frowned upon. We hopped into a taxi to get to our flat, and I began speaking French with our driver. This proved only moderately successful.  I took French from 7th grade through some relatively advanced college courses, at one point was conversationally fluent. I remember my French professor, a thin sprightly woman named Sophie who had dark-rooted blond hair that frizzed past her shoulders in messy waves, who always wore all black clothes with a black leather jacket and smoked a cigarette outside before class. She was really far too cool for San Diego, land of cargo shorts and flip flops. She always yelled at me for my terrible grasp of the negative construction.  When I tried phrases in my mind before arriving here, Spanish words would worm their way in so that I was speaking some bizarre form of a mutated Romance language patois. Our Algerian taxi driver, however, was a patient listener and helped me to figure out some of the words, and having been here now for a few days it’s coming back to me. I’m sure I sound like a three year old, and at one point told the hostess at a restaurant that “she need to go sit outside” instead of asking if we could sit outside, garnering a furrowed brow and slightly offended look. I corrected myself, she broke into a smile and waved us to a table. 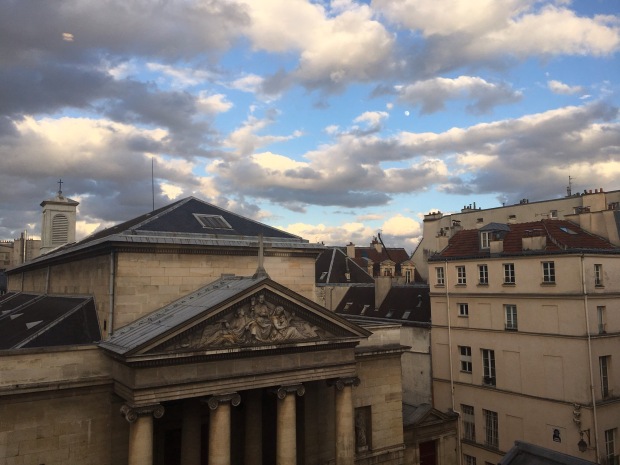 The view from our 4th floor flat, across the street from St. Denys

We’ve a little flat in the Marais, clean and modern in what’s clearly an old building. The Marais is one of the oldest districts in Paris and the one least touched by modernization. Whereas much of Paris is characterized by large grand boulevards and Haussmanian architecture, the Marais retains its near-Medeival heritage. Many houses are fronted by large double wood doors that open into a courtyard, created for horse and carriage to pass through and then have room to turn around. “Le Marais” literally means “the swamp,” and was a waterlogged area for vegetable gardens until drained for French nobility to build grand mansions. After the Revolution in 1789, the nobility declined as did the area, becoming a more working class neighborhood. It then became an important Jewish & immigrant neighborhood, before turning into a gay friendly neighborhood, before being completely gentrified by what our taxi driver referred to disparagingly as “bobos” and what we would call yuppies, if we even use that word anymore.  For visitors like ourselves, however, this means a delightful place with small narrow streets filled with boutiques, bars, restaurants and museums. 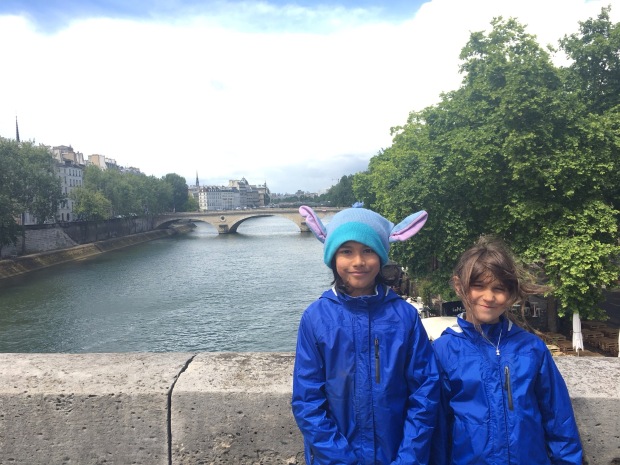 After dropping off our bags, we went on a mission to find crepes. This proved surprisingly more difficult than we’d anticipated, and we didn’t find a restaurant until we’d wandered onto Île de la Cité, and were grandly rewarded for our efforts. We continued to Notre-Dame, and walked in to look at the cathedral, built and remodeled over the years. I particularly like the gargoyles myself, edging the stone as protective spirits. In that they shuttle rain away from the structure, in a way, they are literal protectors as well. 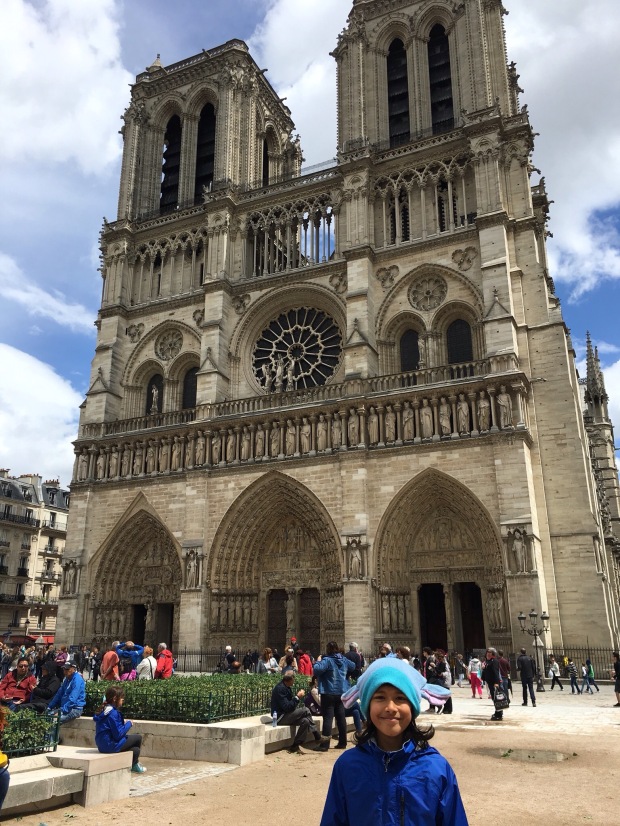 In front of the famous cathedral, the breeze has died down making Stitch once again lop eared 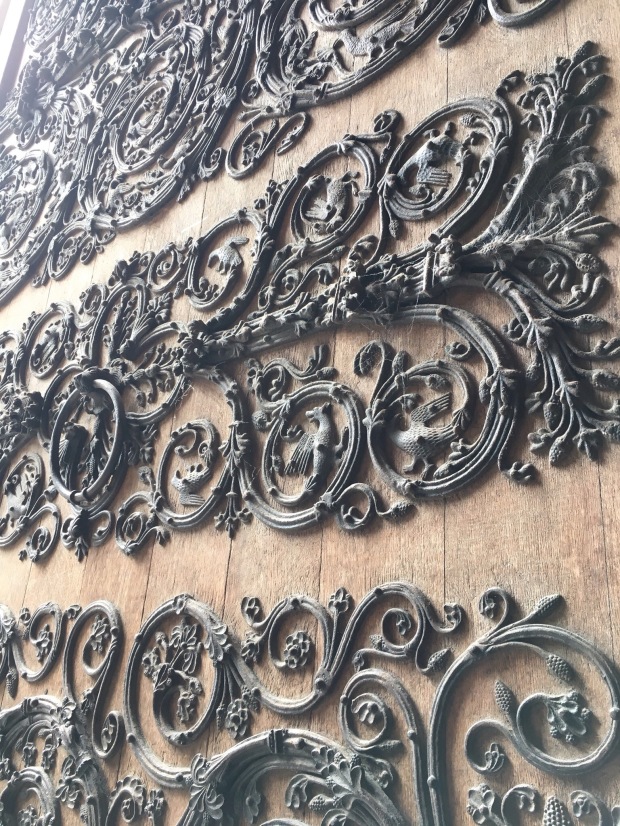 Ironwork detailing on the doors 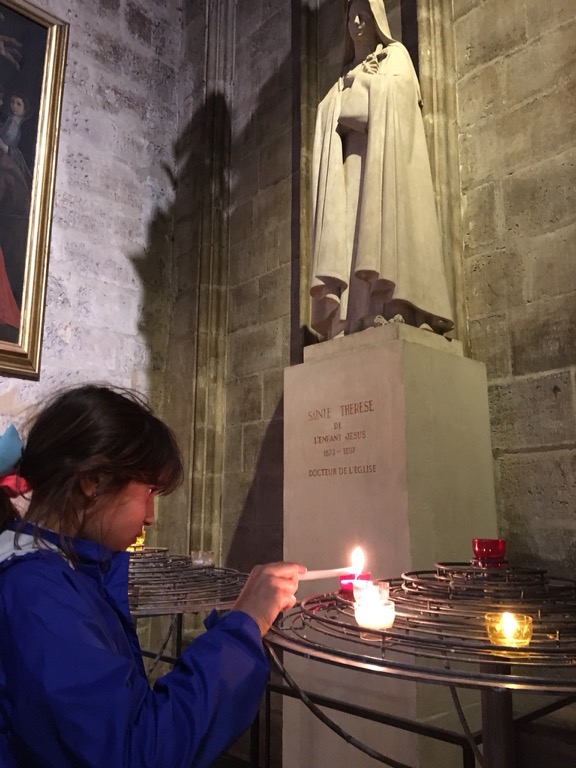 Our Catholic schoolgirl lights a candle for St. Therese

We continued on to the very tip of Île de St Louis, to see the love locks left by romantic hopefuls on the fences surrounding. You engrave your name, close the lock on the fence, then throw the key into the Seine. The more famous bridge with love locks is the Pont des Artes, where they’re cut down as they damage the structure. Honestly, I get the idea behind it, it’s sweet. But it seems to me a modern and damaging form of graffiti that will eventually destroy the beauty and the structure itself, is this the legacy you wish to leave? Not to think of the keys rusting at the bottom of the Seine, which I can’t imagine are good for the environment or the fishes. Akin to carving initials into a tree stump, what is it about young love that requires some form of violence to prove it’s legitimacy? Call me a curmudgeon if you will. 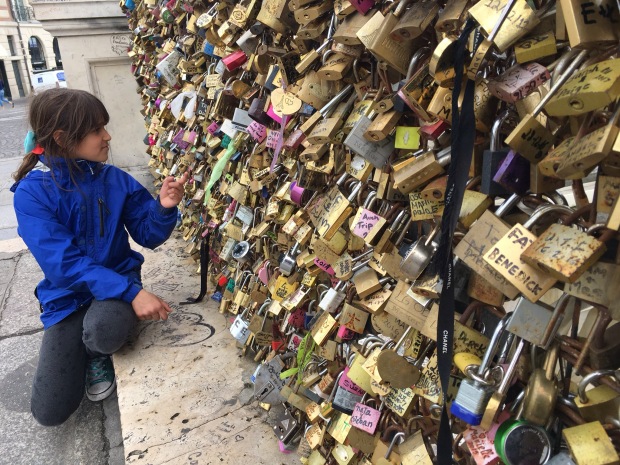 Across the bridge to Shakespeare and Company, an English Language bookstore on the Left Bank. Opened by an expat American, Sylvia Beach, its other branch in Paris had been a literary hangout for Hemingway, Joyce and other authors of their ilk. That branch is closed, but the one across from Notre Dame remains. No pictures are allowed inside, sadly, but to wander among the tall narrow winding pathways filled with gorgeous books is an experience. Upstairs is a quiet reading area that echoes the reading library at the former space, complete with nooks and slumbering cats, where you’re welcome to sit and relax. 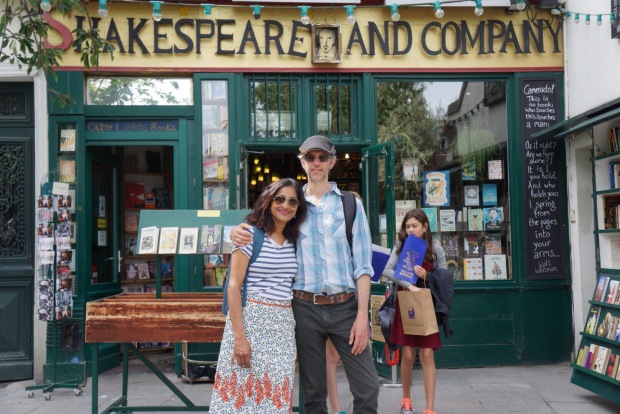 The only picture we got outside the shop, taken the next day. The girl kept trying to photobomb and I got so annoyed that I just walked away instead of waiting to get a picture without the random tourist in the background.

Here, of course, is where we were when a terrorist decided to attack a police officer with a hammer just across the street at Notre Dame. Eric writes about this eloquently in his post here.  I was at the front register when I heard two loud sounds from outside. Couldn’t possibly be gunshots, I disbelievingly thought to myself, but I’d turn out to be wrong.  I had been waiting for an employee to bring me a copy of “American Gods,” so we were still in the store instead of walking past Notre Dame right when it was happening. (She showed up with the book, but it was a heavy hardcover and I felt too guilty to get it, knowing that we’re carrying everything with us. Now of course, it feels like a talisman protecting me, as had we not been waiting for it we likely would have been walking across the plaza at the time. I went back a day later to buy the book, and alas, it was sold out.  I bought a copy of “Anansi Boys” instead, I hope it serves the same protective influence.) The store employees closed the doors and told us to all stay inside. The kids were nervous and scared, but sat in a corner reading books calmly.  After sheltering in the store for a while in limbo, I asked someone scrolling on their phone what was happening and learned that it was one person with a hammer who’d been shot. Feeling safe to do so, we left through the side entrance and took a long route home, staying well clear of the Notre Dame area. Later on, we talked it over with the kids, and over the next few days answered more questions from them as well, hoping to help them process what had happened.

Eric and I dropped the kids at home and went to find bread, cheese, vegetables and wine for supper.Given how expensive Paris can be for food, our goal was to eat in as much as possible.  As always in a new neighborhood, it took a little longer but home we came and after a deliciously fresh sandwich, to bed, content at our first good day in Paris, terror attack and all. 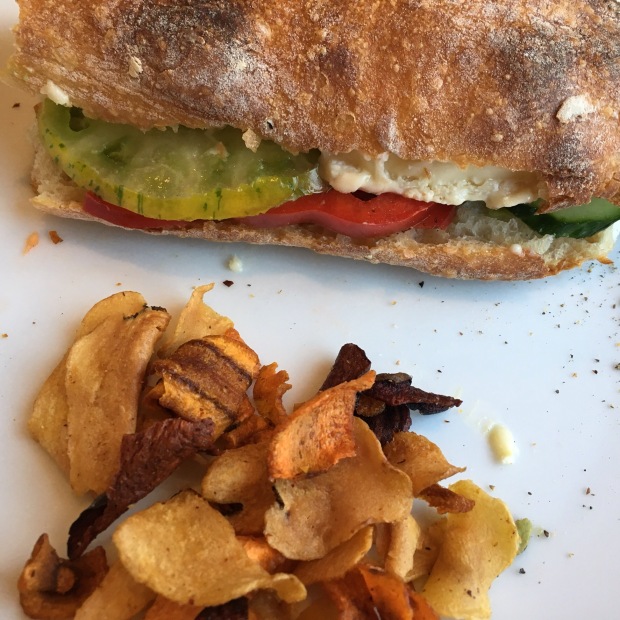 Given that it’s bright here until well near 10 pm, we slept in in the morning before heading out for a leisurely walk through the Marais, stopping by the remnants of the old city wall and various other architecturally interesting buildings, ending at the St.Paul Metro, where we hopped on board to get a bit outside the city and meet Bruce for a bike ride along the Marne. 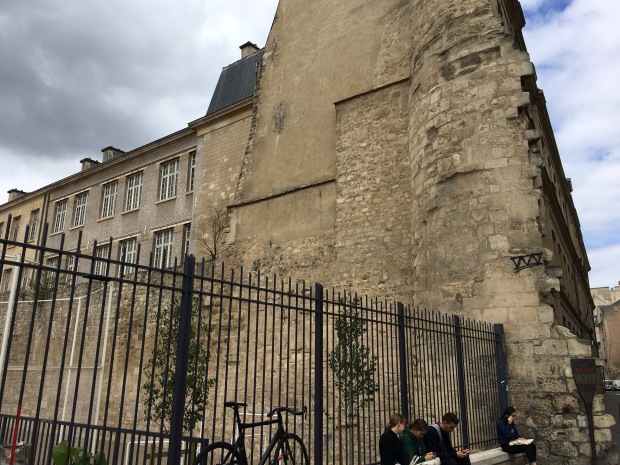 Remnants of the medieval wall, now surrounded by cellphone checking teens. Bookends of new and old in Paris

Bruce is an American who’s lived in Paris for many years and runs bike tours in Paris and also in the countryside. If you are planning a trip to Paris, I highly recommend his tours to get out of the city – email him at French Mystique Tours. We did a three hour bike trip along the Marne, and it was lovely. As we wheeled past the geometrical French cottage houses, the boy burst into song, “Little town, it’s a quiet village, every day, like the one before…” 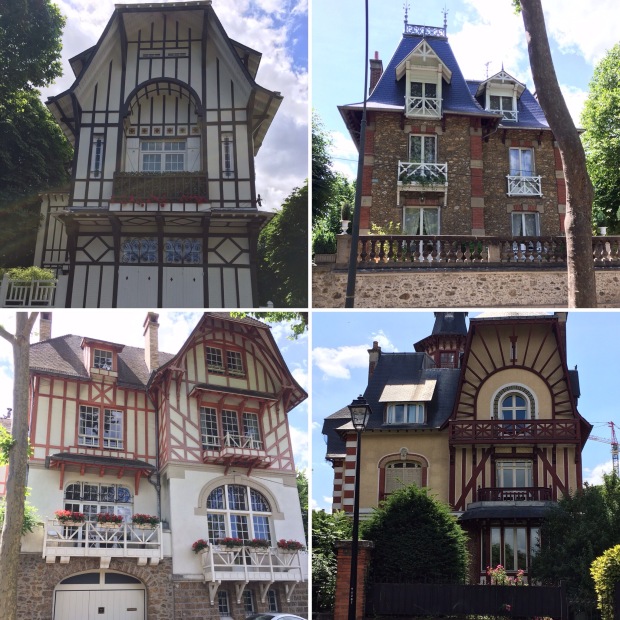 Cycling in France is a bizarre experience, in that cars respect bikes on the road. Vehicles on the right have right of way, which is respected by car and bike alike. If we were going slowly on a narrow one way road, cars slowly trailed us until they could go past, with not a one getting too close or trying to squeeze around. Used to being nearly run over by Irish drivers, we were hesitant at first around the cars until we realized they really weren’t going to hurt us. 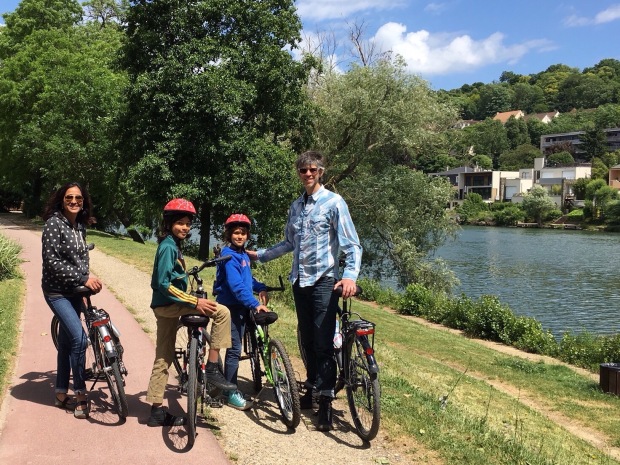 At one point, the girl’s front tire slipped on a curb and the bicycle tumbled sideways, throwing her off of it onto her palms. Without tears or wailing, she picked herself up slowly and rolled up her pants leg to see how badly her knee was skinned. We waited back, asking if she was okay. “I think so,” she replied. “My thumb hurts.” In all honesty, I was worried she could have broken her wrist, as she landed on outstretched arms. A quick finger and wrist exam, though, didn’t reveal anything other than some bruising, so off we went again. That girl, she is tough.

Returning to the town of St. Maur des Fosses, we walked back into the quiet center for a drink and a waffle at an outdoor cafe before returning to Paris, our cozy little flat, and a well deserved night of sleep. 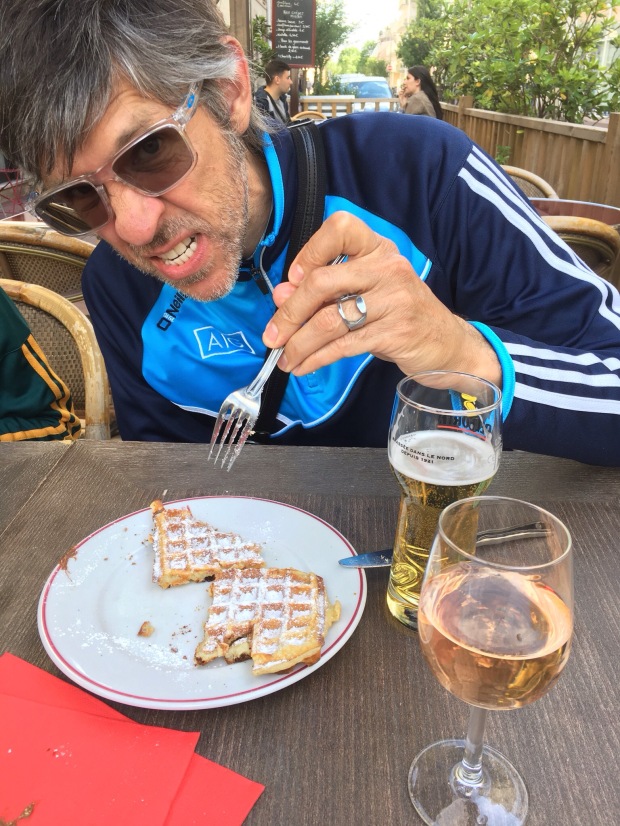 Attacking waffles with a Viking manliness, and YES to rose in French summer

2 thoughts on “In Which I Embarrass Myself in French, and we begin our plan to eat all the carbohydrates in Paris”