The Icelandic Air flights to Reykjavik welcome you to the land of ice and volcanoes with overhead lights of the aurora borealis. The seatbacks each have their own tv, and I watched a documentary called “Yarn” which follows four knitting and crochet artists from different countries who create art in very different formats. I found it interesting how they described knitting and crochet as looked down upon as craft and not art, because it’s largely the realm of women and is used to create practical goods. Men tended to be the weavers in society, producing tapestries that were used for decorative purposes. Women, however, would knit elaborate sweaters, socks, and other garments for use by the family. Something in the practicality of the items means that they are not seen as art, though it could be argued that really this should give them more value. One of the women who “paints” with crochet talked about how she is often criticized for not being a “real” artist because of this. I hadn’t thought about fiber arts in this light before, from a feminist perspective, and if you have the chance to see this documentary don’t pass it up.

The airport is slightly confusing to walk through, and we ended up being the last ones to collect our luggage. I’d read many, many tips online that the cheapest place to buy alcohol was at the duty-free shops, so I got two bottles of wine there, anticipating we wouldn’t go out much because it’s so expensive. Icelandic residents could easily be identified at this point, as they were the ones who were hauling several heavy shopping carts each, filled to the brim with their allotted allowance of beer, wine and spirits, clinking like glass musical chimes as they rolled over the asphalt to their cars.
We dropped off our luggage at our guesthouse and headed immediately to the pool and hot spring complex Lagurdasalag. We stopped at a sandwich place for lunch, and I was hit with severe sticker shock. I knew that Iceland was pricey, but when you’re paying $15 for a 9″ vegetarian sandwich it takes your breath away a bit. I immediately looked up some grocery stores for later eating.
The pool was unbelievable, and exactly what we needed after the stairs of the Eiffel Tower the previous day. Man, the Icelanders really know how to set up a pool. A primer then, on Icelandic pool etiquette. At Lagurdasalag, you pay at a front counter and then get a rubber bracelet that then operates the lockers inside. Outside the main locker rooms are cubbies and lockers for your shoes, as your filthy shoes shouldn’t enter the clean space. Take your shoes off and put them here. If you’ve worn your $600 Jimmy Choos to the pool, you can put them into a plastic bag and carry them inside as well. (Of course, if you own these shoes you’re at the Blue Lagoon which costs $60/head and you can drink champagne and not here where it’s $9 for adults and $3 for kids.) Once inside, pick a locker and undress completely, leaving your clothes behind in the locker. Take your towel and your swimsuit with you to the showers, as you will not be returning to your locker until you’re done. Leave your towel on a metal rack outside the shower where it’ll stay until you’re done swimming. Take a shower and use the soap provided (or your own) to wash thoroughly. If you get confused about how to bathe, there are multi-language signs which have large yellow circles over the areas to scrub most vigorously. Now put your swimsuit on and head outside! The key is that the locker rooms stay dry – you would never take a shower and then walk back to your locker dripping wet to get your suit.

Photos aren’t allowed at the pool, so this is one from the web, obviously not my photo

Outside are several pools, a 50 m lap pool to the left, in front of us a large play pool with a waterslide and then smaller hot pools of various temperatures. Even though the ambient temperature was 56 degrees, the water was so warm that it was unbelievably comfortable and everything was so clean. It’s like the opposite of American waterparks – it’s cold outside so you get into a hot pool. The main pool also has a variety of large foam toys to ride on, and foam islands to walk on. Eric swam laps first, then we all played in the warm water. When you’re ready to leave you repeat the process above in reverse – take a shower, towel off so you’re dry, then go to your locker, get dressed, go outside, put your shoes on and off you go.
The Guesthouse Galtafell is just in downtown Reykjavik, and was perfect for us. While it was a bit of a splurge (I typically don’t spend more than $100/night for a place), I wanted a nicer place to stay for our last trip, and this was lovely with a sitting area and small kitchenette. We’d awoken at 5 a.m. to get our flight and were too exhausted to think of cooking, so we went downtown to Glo, a vegetarian restaurant I’d heard about. The food was super tasty, and is relatively reasonable for Reykjavik, but at $20/plate it was the last meal we ate out.

Quite tasty! One main, 3 sides, and sauces.

After this we went for a walk around town, and here is where I must admit to one of my worse moments on the trip. Friends, I had my very own weeping hour. 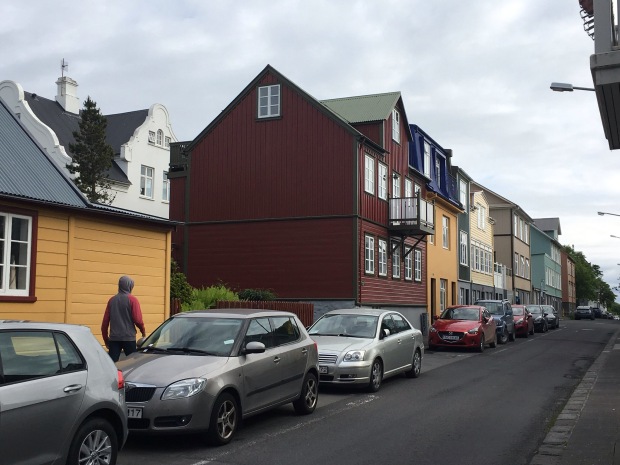 Walking the mean streets of Reykjavik at rush hour

Reykjavik is a spotless little city, indeed the smallest (and northernmost, the boy tells me as he reads over my shoulder) capital city in the world. Houses are made of brightly painted corrugated aluminum, and the downtown area shops do a brisk business in selling anything alcidine, which I’ve just learned is the adjective word for puffins. 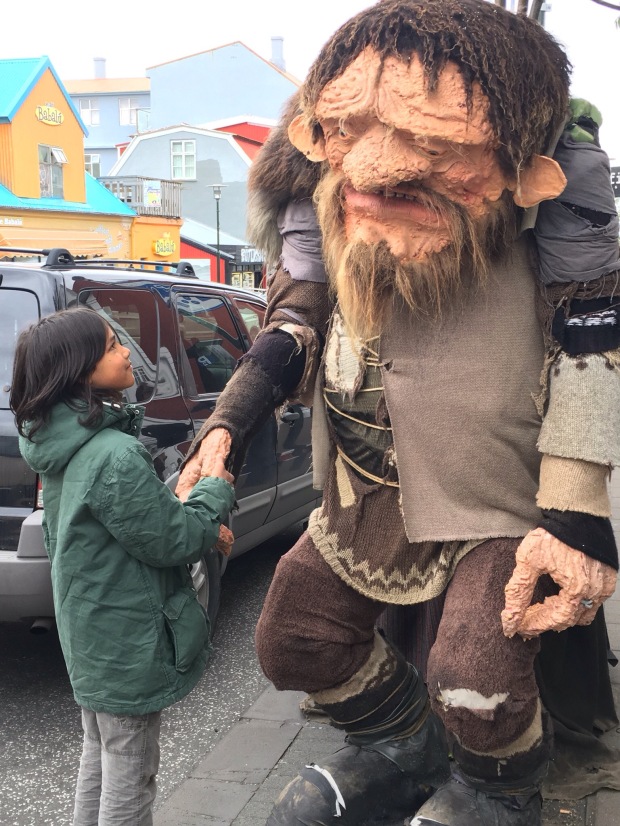 My hope had been to walk around, check out the yarn shops, get some ice cream and then head home. The kids started fighting immediately as we walked out to the street, because they’re human and it had been a very long day, beginning with a 5:30 AM taxi ride to CDG airport. This got Eric to be appropriately upset because we hate it when our kids are acting meanly towards each other in public and especially in foreign countries, where I feel like we just represent America poorly and loudly. Ice cream was taken away as an option, it turned out the yarn shops were closed, and then Eric ran to a shop across the street to look at hats, and I felt abandoned. The kids and I ducked into a bookshop and then began the constant chorus of “Mom Mom Mom Mom Mommy Mom! Hey Mom! Come look at this! Mom! Mom?! Mom!” And I reached my limit. What really threw me over the edge was when Eric came into the shop and while the girl was actually pulling one arm of mine to go and look at something, he took the other to show me something else. Literally being pulled in two directions, like a frayed cord, I began to snap. “When do I get to look at something?” I wailed internally. We walked outside and Eric saw another hat he wanted to look at and took off again. The kids asked if they could go home and play a video game and the parents could go out, which made me feel like no one wanted to be with me at all, preferring a screen or hat shop instead. We were standing on the corner when I started to weep. 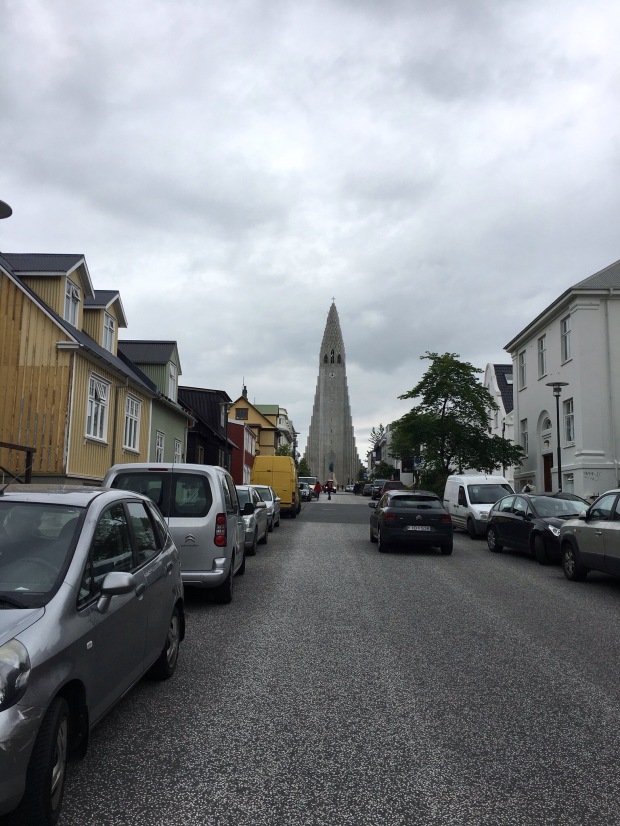 Street view looking up to the Hallgrimskirkja cathedral. No amount of cajoling could convince the kids to visit one more church.

Sitting here now in full possession of my faculties, I realize this is all ridiculous. An objective look would just be a family wandering down a small main street and checking out various shops. The kids were beyond exhausted and didn’t have the capacity for wandering and just needed to go home and veg out for a bit. I get plenty of time to do as I wish for myself. In my over fatigued state, however, I couldn’t see this and just felt like the world was all against me. It wasn’t my finest moment, and I can’t say that I went to bed feeling any improved, such was the fortitude of my melancholy.

Solfar, or Sun Voyager, sculpture on the Reykjavik bay

The sun never fully sets here this close to the summer solstice, only dipping below the horizon so blackout shades are a necessity, and even so some light bleeds in through the sides. Despite this we all collapsed into bed and after a good night’s sleep, all was right again with the world.