A couple months ago, I took a week off of work for the kids’ Spring break and we headed up north on a road trip.

Driving in New Zealand is not really a fun experience. It’s often quite lovely, as you are threading your way by deep gorges covered in subtropical foliage, or along a rugged coastline, but it is almost entirely two lane roads that wend their way precariously along them. Much of the time, the maximum speed is 40 mph. So even though distances look short on a map, like 2 inches, it can take HOURS to get anywhere.

We drove to Auckland, excited to find a real sushi place, as we were going to the big city. In this, we were entirely disappointed. I have yet to find sushi here that even matches with the average roll you’d find at Whole Foods back home, sadly. It’s all futomaki and filled with traditional Japanese meats such as fried chicken. We were kindly hosted by our friend Chris’ parents there, and headed out early in the morning.

Our first stop was to the Waipu caves, tucked off road on a gravel path. New Zealand is well known for glowworm caves, where you walk in and after giving your eyes a minute to adjust, look as if you’re outside under the stars because of the thousands of tiny little glowing creatures covering the roof and walls of the caves.  It’s so beautiful, and we first saw this at the heavily trafficked tourist haven of Waitomo last year where you are sheperded in a line and sit in a tiny canoe on a track for five minutes to see the magic. These caves, however, are entirely free.  You pull up, walk across a grassy field of muck and down you go, open to explore to your heart’s content. 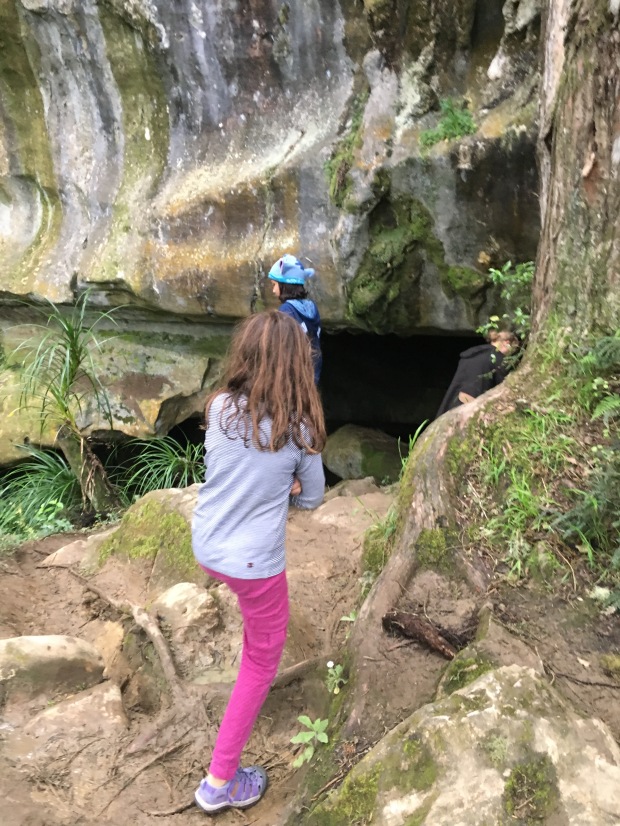 The unassuming entrance to the caves

As we pulled up, a group of French tourists got out, completely bedecked in spelunking gear. Waterproof pants, jackets, headlamps, hiking boots with covers, they were PREPARED. As we are trying to be more culturally sensitive here, we decided to do it the Kiwi way – barefoot and using our phone flashlight to navigate. The kids and I scampered forth and may have left Eric behind, which he may have been a bit upset about given that he is not fond of caves in the first place. 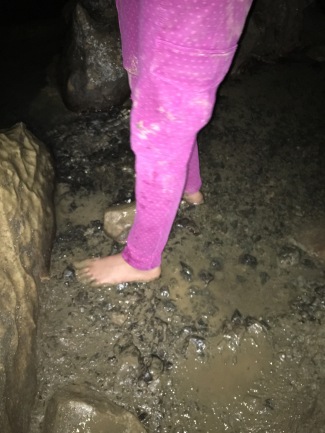 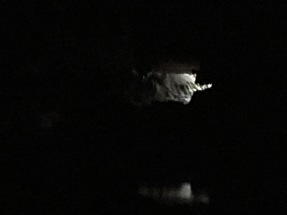 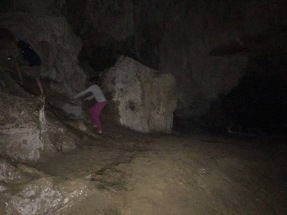 Sadly, because I didn’t bring a camera and tripod to take long exposure pictures, you can’t see the glowworms the way we did, so you’ll just have to trust me on it. But it was incredibly cool to scramble around in the quiet underground with the Milky Way seemingly overhead, and feel the mud squelching between your toes.

After that it was onward to Tutukaka, where I had been hoping for a snorkelling trip to the Poor Knights Islands, alas, the weather did not allow for this. Instead we spent a few pleasant days kayaking around the harbor and hiking the beautiful walks to be found around before heading to Russell. 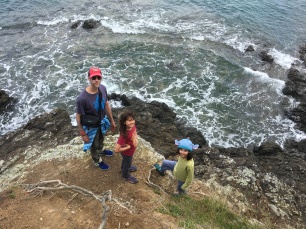 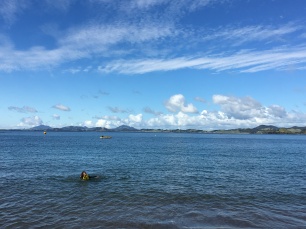 Further up north, our first stop was the Waitangi Treaty grounds. The Treaty of Waitangi (Te Tiriti o Waitangi in Maori) is a document signed in 1840 that theoretically establishes a governance of New Zealand by the British Commonwealth under the Crown, recognizes Maori land ownership and gives them the rights of British citizens. In practice, this is much more controversial. The English and Maori versions of the documents vary considerably in word and intent, and it cannot be argued that the two peoples have had a peaceful and equal existence since the signing of the Treaty. Today, the Treaty seems to be looked at still as a guiding document and one that is used to attempt to redress Colonial wrongs. 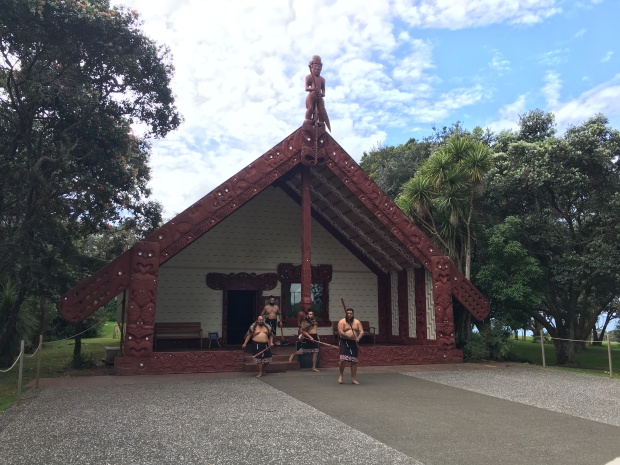 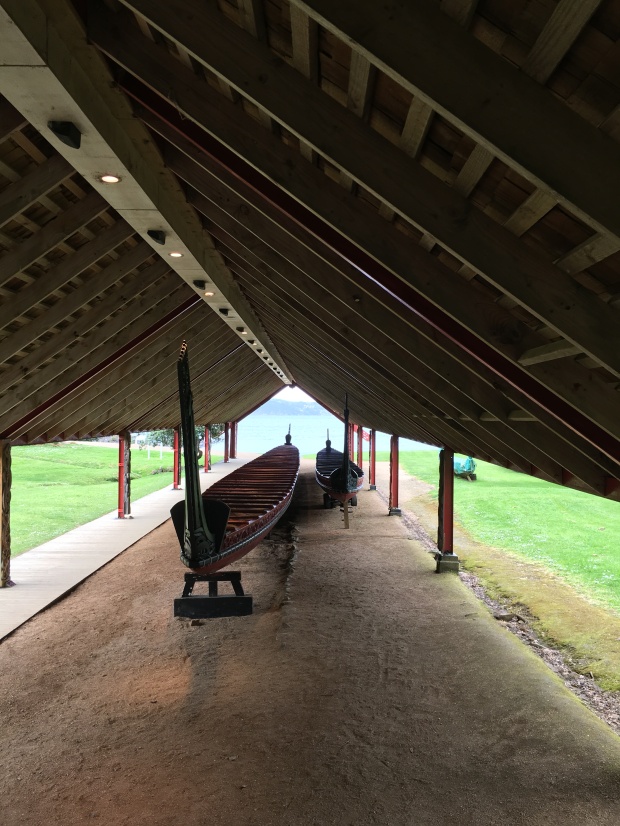 One of the big tourist draws in the Bay of Islands on the Northland East Coast is to take a boat tour that takes you out to Hole in the Rock. This is a large Rock in the middle of the Bay with a hole in it. I…don’t see the interest and whoever is responsible for the marketing is a genius. We had still hoped to take a boat out to one of the smaller islands for a trek around, but it was still winter season and we hadn’t planned very well, so instead ended up taking a small boat to go around a bit to one of the largely uninhabited islands. The boat had stand up paddleboards, and we enjoyed a pleasant hour floating about the isolated bay. 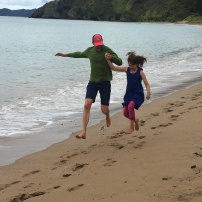 Skipping along the beach 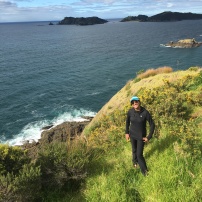 Lookinkg over the site of an old WWII garrison 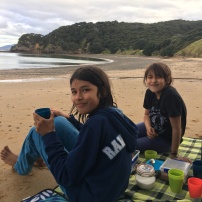 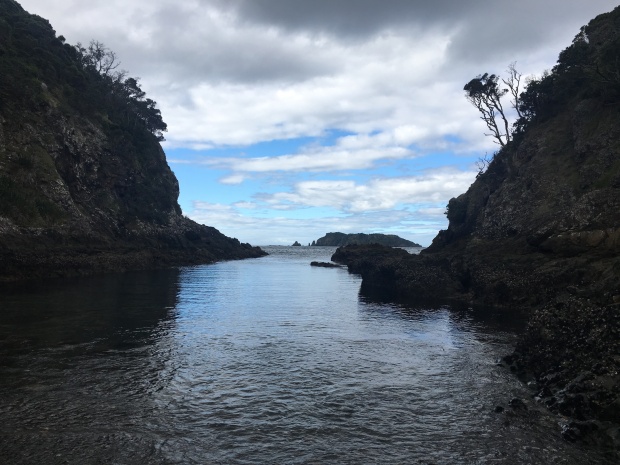 Little waterways among the islands