I started this scarf  in October as a travel project, and I only *just* finished it.  It’s pretty but the lace got a bit repetitive, to tell you the truth, and I’ve only worked on it intermittently since then.  It’s so pretty, though, that I’d contemplate slogging through another one for myself as this one is destined for my sister. When I called to tell her it was finished, her only comment was, “But it’s like 80 degrees here now!” I’m not sure if that means she no longer wants it, but a scarf promised is a scarf promised and into the mail it goes. 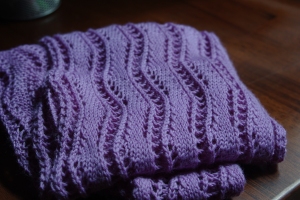 The color is truer in this picture–a really lovely lavender. In the 2 yo section I knitted through the back loop on the purl side rows, which I only realized I wasn’t supposed to do about halfway through the scarf.  I think it added a nice twist to the lacy parts, though, and actually like it. 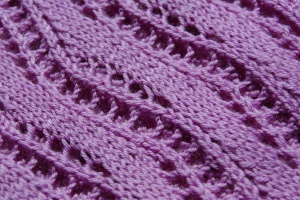 Perhaps she’ll take a (sweaty) picture of herself wearing it and send it along to post? It’s always more fun to see the knitted objects on a person.

My next project is my first adult sweater, and I’m more than a bit intimidated.  Doing it with bulky yarn, so it should go quickly.  The yarn is Pacino from Artfibers in San Francisco.  It took me a long time to find a suitable project for the yarn–it’s almost too pretty to knit, to tell you the truth.  There’s always a bit of fear when you buy pretty yarn that the finished product will not be as nice as the yarn itself, or that you don’t do justice to it.

Whenever this happens and a finished object is ugly, I think with sadness of all the people and things that went into that yarn for no good.  From the sheep, to the shearers, spinners, and even the dinosaurs who provided the necessary fossil fuels to transport that yarn to me, and then of course the time that I put in to make an ugly thing.

As a side note, I think of this too when it comes to ridiculous movies like “Mall Cop.” I mean, did cotton plants have to die to produce one stitch of clothing for that movie? And, again, the poor dinosaurs who gave their life to provide electricity to film it–my heart goes out to them. And the farmers who harvested the crops and chefs who cooked the food for craft services–would they have toiled so hard if they had known their food was going to be part of a crappy and irrelevant film?