The knitting dork that I am, the thing that I was most excited about was that our trip to Estes Park coincided with the Annual Estes Park Wool Market.  A whole day of sheepy fun! When we got there, it was even cooler than I initially thought.  On the schedule was sheep judging, alpaca judging, a whole tent of paco-vicuñas, sheep shearing, and sheepdog herding!  And, of course, a whole tent of yarny goodness.

The boy communed with the sheep: 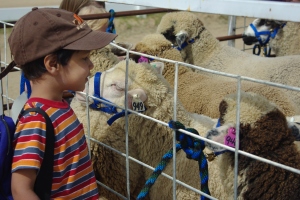 We all watched, fascinated, with the sheep shearing: 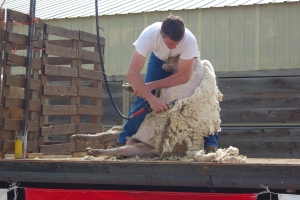 There was a children’s tent where you could try out a few different fiber arts.  The boy loved the spinning and the weaving, and did pretty good! He later saw a spinning wheel for sale and wanted me to buy it for him to take home.

Then it was off to the paco-vicuñas.  I was so enthralled by these creatures I forgot to take a picture, so here’s  a stock shot of them (no pun intended).

These critters are really cute in person, and make some very soft (and expensive, I might add) yarn.

Then the sheepdog demonstrations, in which we watched how they train a sheepdog to herd sheep, largely by watching a somewhat spastic dog run circles around a quartet of, well, sheepish sheep who obeyed his every command. It was amazing to watch the animals interact with each other and see creatures doing what they are meant to do.  (After hundreds of years of breeding and domesticity, that is.  If the creatures were in their wild form, I suppose the dog would have eaten the sheep.)

Then off to the yarn tent, where I purchased a hole in the head some amazing handspun and hand dyed one-of-a-kind yarn.  This time, I swear, there are projects attached to each piece.  I think.  I’ll take some pics and post them later.

That afternoon we went for another hike, this time to Fern Lake. Our number one hiker was in top form yet again.

By the end of the hike he had lost a bit of weight, completing the journey shirtless and pack-less.

In the middle of the hike he announced, as 3 year olds will, “Mommy, I have to go poopy.”  Note how he did not say, “Daddy, I have to go poopy.” After a bit of stalling, we realized he meant it and found a spot to go.  I will spare you the details, but suffice it to say that we only left footprints, and took only pictures. I will at some point use those pictures to either blackmail him or embarrass him at his wedding reception.

Today happened to be my birthday as well, and for the occasion the boy came up with a list of 10 things he loves about Mama.  I’ll leave you with that list.  Number 8 is my favorite:

1. Takes me to the Dinosaur Museum.

2. Takes me to the Art Museum.

8. How she cuts up watermelons.

9. She drives the car well.

10. When we stay in the house and play with me and my sister.