Both of my children attend a Montessori school, where one of the basic philosophies is that children’s play is valuable work and should be regarded as such.  To this end there are various “practical life” stations in the classroom where the kids have scaled down versions of adult activities, like laundry hanging, dishwashing, and sweeping.  (I’m waiting for the class to have a few more useful ones, such as “cooking dinner” work, “putting self to bed” work, or “zymurgy for toddlers.”) One of the favorites is always “window washing” work.  I’m not sure why this is such a big hit, though I think it’s partly because it’s simply fun to spray a water bottle.  I purchased a set recently from a Montessori supply website, though I could probably have just put the whole thing together with stuff from the dollar store.

My intention was primarily for the girl to use it, but the boy grabbed it and proceeded to wash every window in the house. 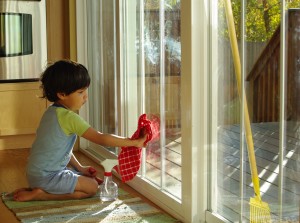 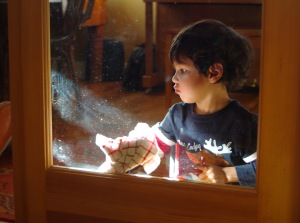 The girl got into it, too: 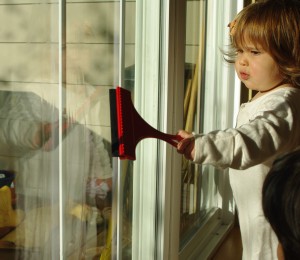 She particularly loved the squeegee, and once when the boy tried to use it, she snatched it back from him and proceeded to whack him on the head repeatedly with the hard plastic side in a fit of rage. This landed her in time out rather quickly.  The boy, to his credit, never cried or lashed out at her, but instead walked over and sat down in front of her.  “It’s okay, sweetie pie,” he said. “I’m your brother and I love you.  Can you say sorry and give me a hug?” They gave each other a hug and promptly returned to window washing, while I got teary-eyed.

On another occasion, the girl picked up a towel and began to wipe off the fridge, completely of her own volition.  Seriously, this must be how they get the school clean.  I wonder if they’re licensed for child labor.  Should I notify the authorities?

She then made the sign for milk, so I handed her a sippy cup thinking she must be thirsty.  She instead proceeded to do this:

See? She realized that the fridge wasn’t actually dirty when she was cleaning it, so she purposefully dripped milk on it and then wiped it off, which gave her a great deal of satisfaction:

The thought process mystifies me–I wish I knew exactly what was going on in that little brain.  Does she need to feel that her work is purposeful? Or did she just want something to wipe off?  I’d like to think that it’s the former, since really, don’t we all want our work to be meaningful?  It reminds me of the Van Morrison song, “Cleaning Windows,” in finding happiness and satisfaction in simple, purposeful work.

Or maybe, sometimes spilling milk is just making a mess for the fun of it.