Late post–work kept me pretty busy last month, hence the downturn in posting.  I meant to have this done by Christmas but better late than never, I suppose.  And now on to the post itself.

When it comes to religion, both Eric and I are rather decidedly (mostly) non-believers.  Eric grew up in a relatively strict Christian household and studied the Bible quite a bit, and while much of the text still holds meaning for him, he is not a practicing Christian.  I was nominally raised Hindu, and a lot of the fables and tales still draw me, even if I don’t believe in the theology.

So what’s a mixed-race, secular family to do for Christmas?

I understand that, obviously, the holiday holds deep sacred meaning for many.  Even without that, it’s a pretty fun time: presents, trees, lights, songs, family.  In addition to the usual fun things, we are trying to develop our own traditions and pick up some that have been lost.

One such tradition ended many, many years ago, in a flurry of pierogi dough being flung across the kitchen.

Eric’s grandmother was Czech, and as such would make pierogies every year for Christmas.  They can have meat, but Nanny made them in her traditional form, as a peasant food with potato, cheese, and prunes.  It’s a bit of an involved process, but Eric remembers how much he loved making them with his Grandmother while growing up.  After his grandmother died, Eric’s mom, Cheryl, continued the tradition until one fateful day when Eric and his mother got into a fight whilst making pierogies.  Enraged, Cheryl began throwing pierogies at Eric across the kitchen.  The original fight has long been forgotten, but ever since that year, Cheryl simply purchased the pierogies instead of making them herself.

A few years ago, we decided to pick up the tradition again, and now the boy is old enough that he can practially make them all by himself.  This year, we tried a fusion pierogi–potato bhaji filling in the usual dough, to sort of combine both of our ethnic backgrounds into our own tradition.  We have not, as yet, made a prune filling out of lack of demand.  We use a very old, very traditional, very…well, okay I downloaded the recipe from the Food Network website–Polish Pierogies by Emeril “Lagaski.”

First you sift the flour, crack the eggs, and then mash everything up. 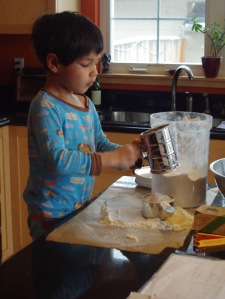 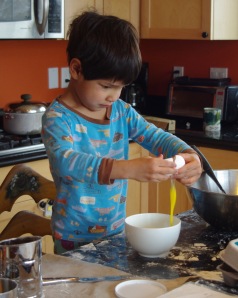 The boy has gotten really good at cracking eggs and rarely gets any shell in.

Then you roll the dough out and cut circles out of it.  The boy uses his own little rolling pin and does a nice job. 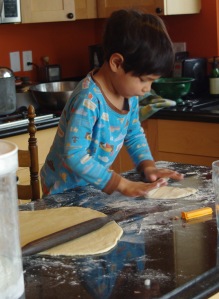 Then you carefully stuff the pierogies.  Note the look of intense concentration on Eric’s face.  This is not a job for the faint of heart.  Too little filling, the pierogi doesn’t taste that good.  Too much, it explodes when you boil it. 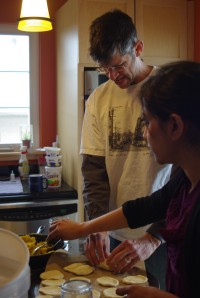 After stuffing and folding over, you use a fork to press around the edges and seal them.  The boy kept calling this “forking” and would cry out, “I want to fork them!”  This caused our inner twelve-year olds to giggle uncontrollably.

Then you have the perfectly plump pierogies, ready for boiling. 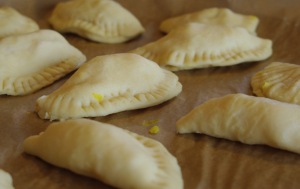 After all of that, we boiled the pierogies and then stored them in the fridge.  We eat them on Christmas Eve, sauteed with onions until they are crispy golden brown.  Sadly, I do not have any pictures of the finished pierogies as I was struck with a horrific flu virus and spent the next two days in bed.  I only got to eat 3 of the 5 dozen pierogies that we made and those tasted like cardboard because of my head cold.  I was told by the other consumers, however, that they were quite tasty.

It’s a pretty involved process, to be sure, but we all love doing it and next year the girl will be able to do a bit more than just eat them.  Something about making pierogies has come to mean that it’s the holidays.  Another tradition we have is that I always make souffle for Christmas dinner, though of course I couldn’t get out of bed to do it this year. Maybe next year I’ll post about that one instead.

I like the idea of creating memories for our children around the holidays, so that when the kids grow up, they can remember how we used to spend the whole day together, talking, laughing, making pierogies, and how eating them will always remind them of home.

What holiday traditions do you have?