That’s what the boy calls experiments, anyway. Currently, he wants to be a scientist when he grows up and do lots of experiences.  One of our earlier adventures was here, but now we’re able to do more complex ones.

A while back I checked out a library book with some kids’ science experiments in it, and there was a whole chapter on electricity and experiments with that.  I went to RadioShack, remembering it from my  youth as a place with random wires and springs and plugs on the walls with acne-faced bespectacled nerds roaming about, and instead found that it had become a mobile phone store with tacky furry talking animals for sale as well.  As it turns out, they do still carry all the wires and such, they’re just hidden away in industrial looking drawers in the back of the store.  (The acne-faced bespectacled nerds are now running all the large software companies and laughing all the way to the bank.)  I purchased a pack of alligator clip wires, copper wire, a buzzer, a switch, a light bulb and stand, and a 9-volt battery, and gave it to the boy for Christmas.

Some of the basic stuff is just learning how circuits work–how you have to complete the loop for the electricity to flow through, starting with a simple bulb. This one is already jazzed up with a homemade switch–nails into a scrap of wood, with a paperclip around them.  Squeeze the paperclip, and it completes the circuit and the light goes on.

Then things get even fancier, with the switch from the shop:

I teach him the basic idea by having him trace his finger along the wires from one battery terminal to the next, and showing how there has to be a continuous line for the electricity to flow and for the light to turn on.  In case you’re wondering, the 9 volt battery doesn’t conduct enough electricity through dry skin to buzz you.  The girl did stick one in her mouth, but it didn’t bother her too much, either. (kidding, only kidding. Sort of.)

The next cool thing is to make a game.  Remember that carnival game where you have to guide a loop of wire along another wire without touching it? Well, that’s just a simple circuit and we have all the tools to make it! You connect a bare wire between the two nails on the block, fashion a bare wire loop to go around it, hook it up such that touching those two completes a loop with the buzzer, and you’ve got a good half hour of entertainment. 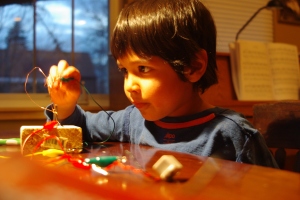 He never did manage to win, sadly, but I confess I might have made it too difficult with a loop that was too small.  Still, he loves to mess around with the wires and such and figure out how to make it all work on his own, which is really the whole point.