I have learned that there are a few of you out there who actually come here for the knitting and not just the cute kid pics.  This post is for you.

I’ve been working on and off on this cardigan for almost a year, which is sad.  I got to a point where I’d finished the fronts and backs and then moved on for a while.  Anyway, it’s almost done, which I’m happy about.

A lot of people have had trouble with the armscyes on this particular pattern, and with good reason–they simply do not fit the way that traditional set-in sleeves are supposed to unless you knit them significantly longer.  Even in the pattern measurements, the height of the sleeve cap is only 3½ inches and is supposed to fit into an armhole that’s 9 inches high.  I knitted the sleeve caps longer than in the pattern, but not quite long enough so I just fudged it.  Suprisingly, this has not been corrected even in the errata for the pattern.

I used the tutorial for set in sleeves found here, but here’s how I did it with this particular cardigan. 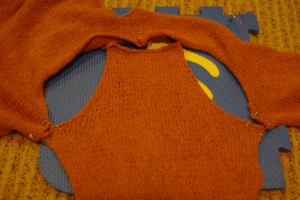 At this point, nothing looks like it fits together. That’s okay, because you’re trying to make flat objects into a three dimensional one which only comes easily to physicists.

Next, I measured the length of both sides and pinned them evenly spaced.  Start with the centers of both, then pin at halfway points between those two and then halfway between those pins: 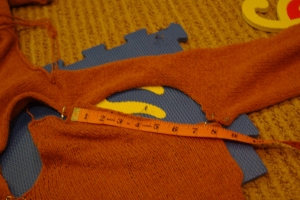 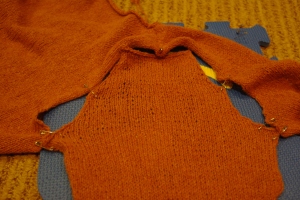 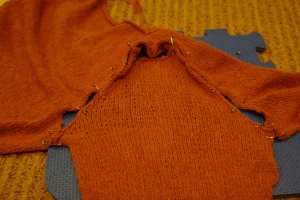 You can still see the fabric puckering where it doesn’t quite meet up.  At this point, you have the option to rip and reknit, or just wing it like I did.  Here’s the fun step where you make it 3-dimensional and see how it all fits together. 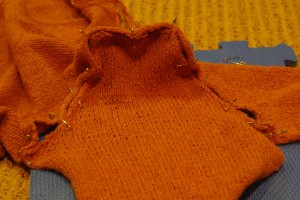 Next comes the seaming, using a standard mattress stitch.  How to deal with the not-quite-even areas? 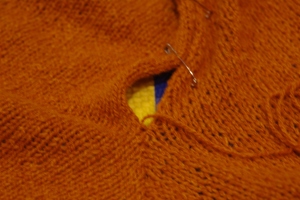 Just pick up more stitches from one side than the other evenly spaced and your problem is solved. 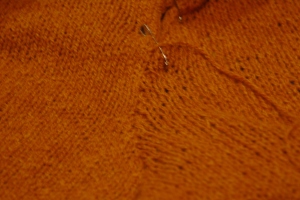 Finish the other side as the first, and you’re left with a set in shoulder, nicely seamed.  This one does pucker a bit but I’m hoping that will even out with blocking and wear and frankly isn’t all that noticeable.

Here’s a closeup of the shoulder seam, which I think I ripped out and redid because of the irregularity in the front, but you get the point. 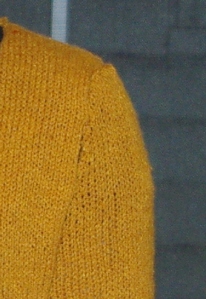 After all that, I realized the fronts were waaaay too narrow, and I had a momentary bit of panic about having to redo the entire fronts, but I’ll save that for the next post!