The garden is planted, save a second row of carrots, bush beans, lettuce, and some spinach (though it’s late for that, I know).

The trellis went up and we put out all of the starts where we wanted them to go.  My hope is that the climbing plants wind their way up the bamboo poles to make a structural focal point for the garden.  I also conscientiously picked plants that have unusual colors or feature to add interest.  For example, the cucumber is an extra long variety, and the pole beans are purple with purple leaves.  There’s a purple and white striped eggplant, a patch of rainbow chard,  and I planted a variety of tomato colors, in the hopes that when everything grows it will be an explosion of color to rival a flower garden.  Of course, that all depends on whether anything grows or not, since I didn’t pay any attention to how these plants do in Denver.  I purchased all of my starts from a neighborhood woman who grows them organically in her backyard.  Everything that I got from her last year grew amazingly well despite the crappy location.  I think it’s because she spends a lot of time hardening off the plants, so when they go into the ground outside they’ve got a better shot at making it.  (Local folks, if you want her info leave a comment or send me a note and I’m happy to pass it along.)

Clearly, the girl was impressed by my brilliant idea.  Her basic function during the planting was to act as reluctant cheerleader, occasional digger, and mostly a general hindrance.  But then she’d give you this super cute face and you couldn’t possibly be upset with her.

The boy helped by planting dahlias in the center section:

As for things growing, the pea sprouts from a few weeks ago are up to a good start: 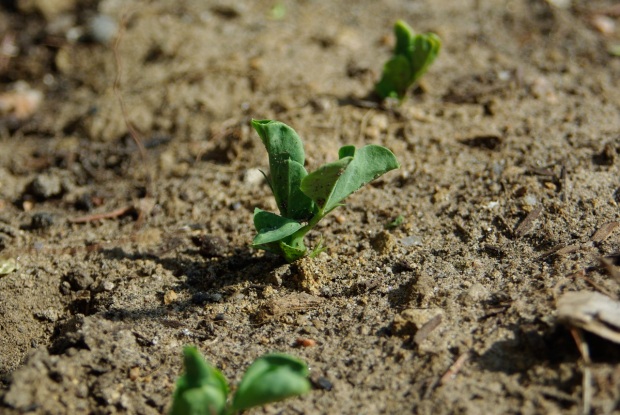 And the final layout of plants ended up like this:

Oops, I forgot to add the spinach in the center of the trellis.  I read somewhere that you can put spinach in the middle of a trellis arrangement because it’s shaded and keeps the ground cool and prevents the spinach from bolting early.  It’s worth a shot since I’ve got the seeds anyway.  I put dwarf sunflowers and zinnia as well as flowering chives along the walkway to have flowers along the path, and also to grow some cutting flowers.  I’d love to have flowers in front of my house I could snip anytime I wanted to brighten up the house or take to a friend’s as a bouquet.

We looked into some grass borders as suggested to keep the grass from encroaching into the garden, but everything I found needed to be dug in before we had planted, and it was too late for that.  Ah well.  That just means more ripping out of grass this year and remembering to do it next year.

And now waiting, watering, occasional fertilizing, and crossing fingers! I’ll try to post picture updates every 2 weeks or so to follow how things are progressing.