No, this isn’t a post about using Facebook in Pirate mode, though we’ve all done it for about five minutes before it got annoying.  If you have no idea what I’m talking about, then go do it now.  If you are thinking, “What is this ‘Facebook’ thing she’s talking about?” then I applaud your ability to live under a pop culture rock for this long.

The boy LOVES pirates.  And not just ANY pirate, but Captain Hook, the mother of all pirates.  Captain Hook holds a special place in my heart, because he was the monster that my parents terrified me into submission with.  For example, “If you don’t go to sleep right now, we’re going to send Captain Hook to get you!” Of course, telling me that if I didn’t go to sleep I’d be attacked by my worst nightmare was basically a great recipe for turning me into the insomniac I am today.  Once, I am told, I got so scared I refused to leave the house so my Dad told me that Captain Hook had moved to Hawaii.  This was all fine and well until we took a flight that required us to change planes in Honolulu.  I refused to get off the plane, convinced that Captain Hook was waiting for me at the gate.  My Dad told me that he had moved to Australia.  I still haven’t been to Australia.

Back to today, we’re generally a pacifist household, and don’t have any toy guns or weapons in the house.  We were once at a flea market and saw a two-year old in a stroller with a very lifelike machine gun, which was shocking.  Still, I’ve ceded some ground on this and acknowledge that there’s no way to keep a four-year old boy from making a gun/sword/machete/cat-o’-nines/brass knuckles out of whatever available objects he can.  So I shouldn’t have been surprised to see him disappear for a while and then return with this creation, modeled the following morning before he went to school. 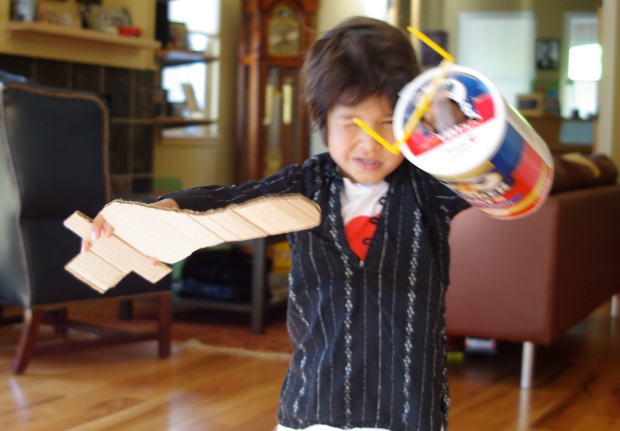 That’s him as Captain Hook.  The hook is created from an old Quaker Oats container, a table football goalpost, and plenty of tape.  The sword is drawn and then cut out of cardboard.

The outfit is just what he happened to want to wear to school that morning, and not associated with Captain Hook in any way.  I guess you’d call it a sherwani dhoti? Indians, help me out here.  The kids are often completely insanely dressed by the time they get to school, as I generally let them pick out what they want.  My philosophy is that if it is weather and activity appropriate, why not?  I have on occasion stepped in to tone down the ridiculousness, I admit, but not often. I sort of love it.

And the pirate love has inspired some great artwork! Check out the drawing below, which I think is quite impressive.  Captain Hook, pirate ship, alligators, all in one place!

And I’m only the tiniest bit scared.

One thought on “I’ll Have Ye Walk the Plank!!”