A bit of catch up blogging here-

We went to San Diego over Labor Day weekend for my cousin Shailu’s wedding! The wedding was a blast and the kids (and I) had a lot of fun getting all dressed up.  I tell you, the girl enjoys getting all fancied up a bit too much, if you ask me.  Must take after her dad.

In many Indian weddings, the groom arrives on a horse and they bring with them one of the young cousins. Now, the boy was supposed to be the one to ride on in with the groom, but on the day of he was a bit tired and grumpy (and honestly, I think a bit scared of the horse). We turned to the girl, who looked at the horse and said in hushed tones, “It’s just like a princess horse!” and promptly clambered on top and proceeded to have a grand time. The girl was in awe of the bride, who was unbelievably beautiful, and I’m pretty sure she thinks that she saw a true princess. 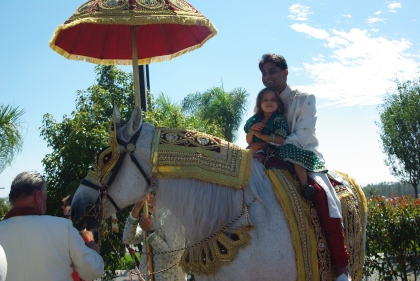 It was also the first time for me to see many of my relatives from around the country and even India since MY wedding, and obviously the first time for them to meet my kids, which was fun.  Now, cousins, all of YOU people need to start having kids so MY kids have someone to play with at the next batch of weddings, k? Also, I’m just looking at this picture now.  I’m so glad my daughter is so respectful.

The big highlight for the kids, though, was the beach. Denver is sadly beach and wave deficient, so most moments we weren’t attending the wedding, we were getting sandy

I took the kids to see my alma mater, UCSD, and while they were duly unimpressed, it was a shock to me to see my children running around my old undergrad campus. Also, in the 14 (!!) years since I’ve been there, it had changed so much that I hardly recognized it, which was good because it tempered my nostalgia.

Of course, no trip would be complete without a trip to the Zoo, where the kids met face to face with some of their own kind 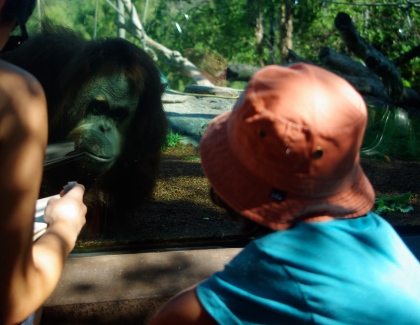 That is such an incredible place-I love going to see all the animals. Koalas! They have koalas! And pandas too, which really were more like fluffy black and white tree ornaments the day we saw them.  And so many monkeys in fun habitats that were swinging all over the place and teasing each other.  The hippo exhibit is so cool-you can get so close to them.

Who would think that this vicious creature is responsible for more deaths than lions and leopards combined?

And we of course made it to Legoland, which is a nice little amusement park for kids under about 9 in terms of rides.  Mine and the boy’s favorite part, though, was the Star Wars scenes recreations in 1:20 scale. 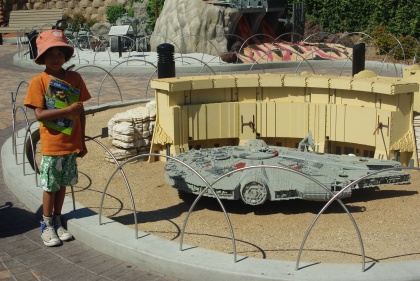 The thing that was the most amazing was that as far as I could tell, there weren’t any specialty shaped pieces used to make any of the models! They’re all made out of standard bricks! How cool is that! I took a bunch of pictures of these but I’ll spare you the geekiness unless you want to see them.  We spent almost an hour just looking at these. Okay, okay, I’ll post one more:

Overall, the trip was so much fun-we’ve got another big family wedding in November and are really looking forward to it. I hope they can manage to bring the beach to Sugarland, Texas, too, because then it would be just perfect.

One thought on “San Diego”

Here’s my level of petty for the day. . So yesterday before heading off to work at 10 am I prepped the sourdough and shaped the loaf. I looked both my kids in the eye and said “in one hour when the timer goes off, put the loaf in the fridge”. Did they do this? They did not. At 5 pm I get a call “were we supposed to do something to the dough? It’s gotten really really big.” “You had ONE job. Do you not remember what I said?” “Uh, wasn’t really listening”. So this morning when I took the floofy overrisen misshaped loaf out to bake I thought I’d carve in a reminder. “U HAD 1 JOB”. Kids. Sheesh. 😂