Our last day in Denver was getting a few last minute things together, throwing in an extra set of warm hats and mismatched gloves into our bags and getting to the airport. Our initial flight was delayed but I’d given us a big layover at LAX so that wasn’t a problem. Surprisingly, security through LAX was a breeze and we had a lot of extra time. (Side note: no security cares about those liquids anymore as long as they’re 100 ml or less) 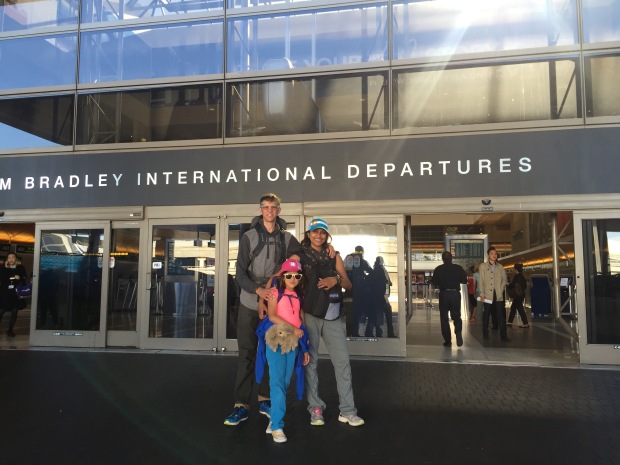 The 12 hours to Auckland was nice! One trick I learned from traveling with my parents at a young age is to always order the special “Asian vegetarian” meal. You get served before everyone else and the dish is always tasty. The girl was in heaven in a little cocoon made up of blankets and pillows and quilts and couldn’t believe she got a whole tv all to herself that came with a anything she wanted to watch and even games. Long haul air travel has come a long way since my last flight!

Customs checkout line was looking, so the boy used it as an opportunity to play some tunes while waiting.

Once we got in and through the airport, we had a few hours before we could check in at our Air BnB. Man, these were rough hours. We were tired and gross and just wanted to get to a bed. We found a little breakfast place called Scarecrow, an organic farm-to-table place and had a very tasty breakfast.

At this point, the kids were being absolute angels, peacefully chatting with each other about the beauty of Auckland. Or maybe they began needling each other. 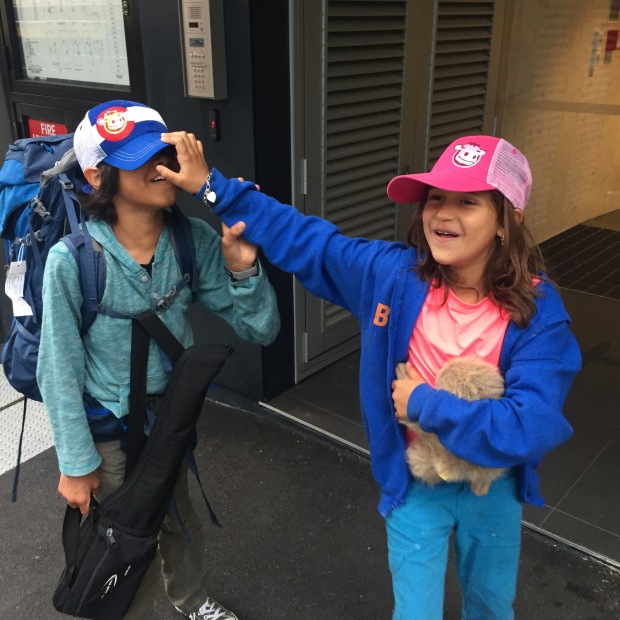 After we got into our apartment, we enjoyed the view for about 10 seconds before promptly going to sleep.

When we woke up it was time to explore Auckland a bit!

Auckland has a population of 1.4 million people which is about a third of the island’s entire population. That’s incredible! The rest of the island must be very sparsely populated other than the other smaller cities in the island. There is a lot of Asian influence here, which you see in the people walking about and in the food available. Given the chilly drizzle, nothing seemed quite as tasty as a bowl of hot ramen! We found a hold in the wall and popped on in.

After this we took a bus to the Auckland Museum. The bus drivers make change for you, which was a pleasant surprise!

The Auckland Mseum was fantastic. After we exited the bus and looked like lost tourists, a very kind lady asked if we were heading to the museum as she was going that way and she would walk us there. She turned out to be one of the head volunteer guides and gave us fantastic mini tour of the collections when we got there! The Auckland museum has the largest collection of Maorio art and artifacts in the world!  I found it fascinating that before the Maori, the island was entirely unpopulated by people and also by any mammals other than bats. There were plenty of large birds which had descended from the dinosaurs, which were largely defenseless and promptly killed by Europeans with guns when they arrived on the island. Way to go.

At the museum they had a Maori meeting house that they were refurbishing. Here are the kids making their best fierce Maori faces.

After all that, we were beat. We dragged ourselves back to the apartment and ordered pizza – one of which was a butter paneer pizza! Tasty and so different. All we had the mental bandwidth for was to watch “America’s Funniest Home Videos” to which I have 2 comments – one, those were pretty funny and we laughed out loud,   and two – really Carleton? How the mighty have fallen.

Today we are off to the coromandel peninsula, renting a car for our first left hand driving experience. Wish me luck.

Ps – I’m typing these up on my iPad and the connection lags a bit, so forgive any typos!