One of the big things Eric and I were really looking forward to was mountain biking in Rotorua. California redwoods were imported there in 1901 to support the logging industry and while they didn’t really take off as a new source of timber, some part of the forest remains. The upshot is that in the middle of New Zealand is a gorgeous California Redwood forest just begging to be ridden through.
We asked to stay at the farmstay an additional day since we figured we wouldn’t want to bike and get muddy and then have to pack up and go somewhere, and man, were we grateful for that decision later! It made me even happier that we had been able to add some flexibility into our schedule and not have everything booked solid before we left.
We called the lovely people at Planet Bike in the morning and made sure they had rental bikes for us. They were so nice, even to switch the brakes so we wouldn’t have to brake backwards with the back wheel brakes on the left! I was so glad of this at many times in the ride. The kids were fitted on fat tire bikes, a first for them! And we were off on the muddy trails. Both kids tried to hit all the mud puddles as fast as they could so that by the end of the day they resembled little else than mini mud monsters. We had them strip before they got back in the car. 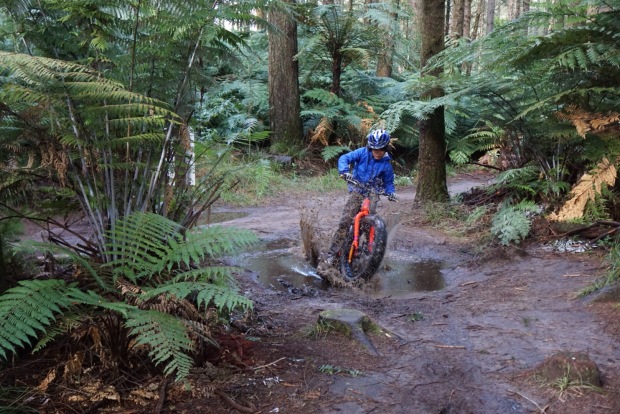 Riding through the forest was so, so beautiful. The entire time I was riding I just couldn’t believe how happy I felt. We ran into maybe another 3 people along the way and the feeling of cruising through a dappled forest with birds and animals chirping about you is unparalleled. The girl got a bit nervous at times with the isolated feeling, and I told her assuredly that it was impossible to get lost in this forest.

About 5 minutes later we got lost in the forest. We had taken a bit of a wrong turn and found ourselves off trail. We used my phone to figure out the compass directions and headed that way, only to find ourselves in denser forest and the clear disappearance of the trail. Under his breath, Eric asked “you sure this is right?” And I replied quietly so the kids wouldn’t hear, “ummm, not really.” Out loud we acted like grown ups and kept saying that we were going the right way.
After we came back out to where we had made the wrong turn, we simply turned around and saw the right road about, oh, 5 yards from where we had been. Eesh. We were able to make it back to the trail and then, the fun part after all the hard uphill riding we had done! Going downhill on a muddy trail with bumps over tree roots was exhilarating!
We had initially intended to go to the Waikiti hot spring before going home, but instead decided to head back to the farmstay to make lunch and de-mud first. After this we didn’t feel like the long drive to Waikiti and instead went to the Polynesian Spa hot spring in town and loved it. There was a pool for the kids to frolic in and they made some friends with two local Kiwi kids who gave their opinion on US politics (Summary: Trump is bad, Clinton is okay but not as good as Obama). Given that I couldn’t tell you anything about who runs New Zealand, I’m amazed at the overall cultural dominance of the States in this regard.
Back home for a peaceful night in, having made some pesto pasta at home for a simpler night of food comfort.