We had a travel day from Sydney to Cairns, our first domestic flight of the trip! The most salient feature for me was that not a single person checked my ID. Anywhere. We arrived in Cairns and immediately felt an unfamiliar sensation…warmth. After 10 days of drizzle and cold this was a welcome change. We went to find some lunch, when the boy said his stomach wasn’t feeling well. We all knew by now where this was heading, except for Eric who said “I think your stomach doesn’t feel good because you need to eat more.” I asked, “have we learned nothing from our experience last week?!” And the boy ate nothing, which turned out to be a wise decision shortly after this.
My main interest in going to Cairns was to be able to snorkel the Great Barrier Reef. However, whenever I told people I had planned to go to Cairns, the universal reaction was a groan of disgust. An Aussie friend of ours told us that we should at least go to the Daintree rainforest if we were going to go there. I did a little searching and found that there’s a town called Port Douglas up the coast from which one can do rainforest and reef tours, and booked there instead. Thank God. We pulled into Cairns just for a bite to eat and immediately hated it. It had all the charm of the Jersey Shore, and I don’t mean the nice part of the Shore. No one was friendly, the buildings were ugly, and you know how you can just get a feel from a place? Cairns did not have a good one.
We got out as quickly as we could and drove to Port Douglas, with a slight pullover for the boy to throw up, after which he was much improved and immediately starving. Weird bug. Our hotel in Port Douglas is an incredibly nice 3 bedroom suite overlooking 4 small pools and with a hot tub on the balcony! Sweet! Port Douglas, as it turns out, is a tony little resort town where we fit in juuuust fine.

The next day we took a day off from ‘traveling’  and just went to the beach, where we saw all these cool patterns made with little sand spheres! I later learned that these are made by creatures called sand bubbler crabs. I thought they made the little balls by digging their holes and then spitting out the sand, but it turns out this is how they eat! During low tide, they emerge from their burrows and sieve the sand for meiofauna which they eat, then expel the unwanted sand in neat little balls. As they do this radially from their burrow hole, it forms incredible patterns in the sand. They’re efficient little critters and can cover the entire beach in a few hours of low tide.

We’ve been spending our evenings watching the Olympics, which is another experience in Australia! Given that the focus is on Australian athletes we’re seeing all sorts of fun events that are not featured at all in the US. Our favorite has becomes women’s rugby sevens! I have NO IDEA what is happening during the game, but there is SO much action on the field it is fun to watch. Also, those women are tough as shit. Especially when you compare them to the lame men’s soccer players who seem to whine and cry when they stub their toe every five minutes, it’s impressive. We’ve also watched a fair amount of fencing, horse jumping, trap shooting, and water polo!

We also happen to be here during the Australian census time, and apparently even international tourists are supposed to answer! Here’s some of my favorite questions: 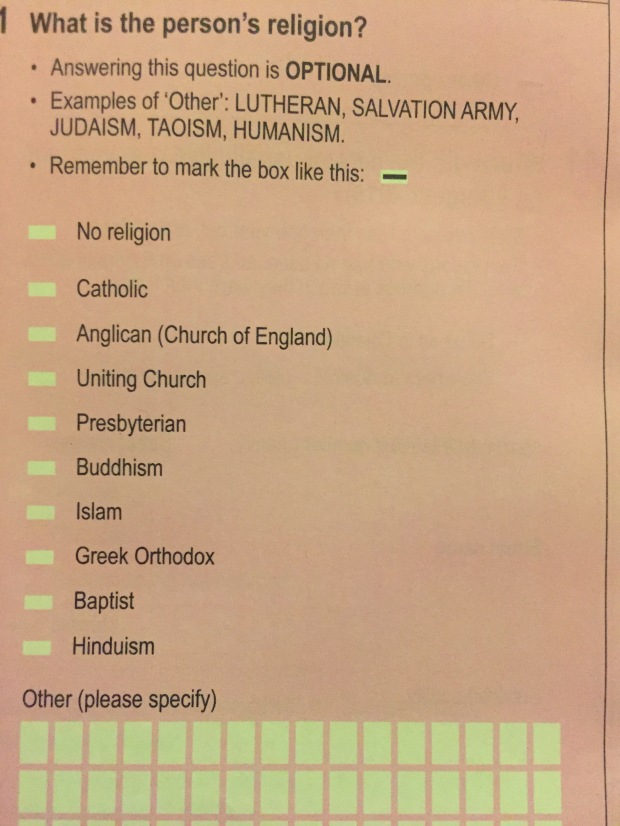 So many white ethnicities! Eric answered “German” and “Czech.” I like that there’s just “Australian”. We don’t have that option in the States, now do we? I also liked how Salvation Army is a common enough religion to be on the main list.

And I’ll leave you with my two favorite questions. 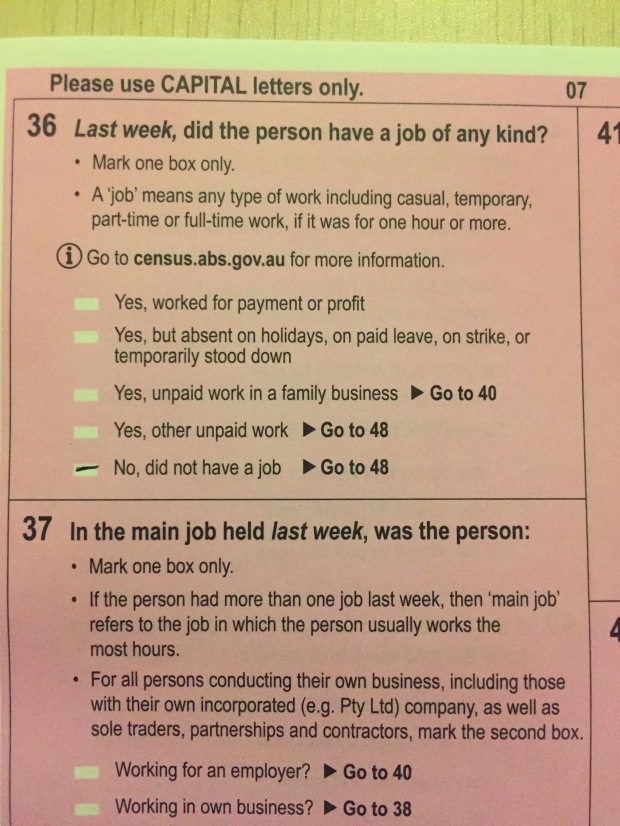