We’ve arrived in Ho Chi Minh City, or as the locals prefer to call it, Saigon. After a day of relaxing we booked another Grasshopper bicycle tour, met our guide Nguyen, and were off. Man, it was hot and humid. Due to our inability to convert inches to centimeters and thinking we’d have a chance to fit the kids for bikes, one of the bikes was almost comically small. Thankfully, the boy took this one and did just fine with it.

It was a muddy, bumpy ride through the countryside, and it was so fun! Passing by rubber plantations, we stopped at a rice paper making factory, where almost all the work is done by hand. You know those little lines when you get the sheets? It’s from them drying on the bamboo mats! I always just thought they were decorative.

taking the rice paper off the drying mats

rice paper dried on the mat. See the pattern?!

Drying mats in the sun

cutting machine, and rolls of circular rice paper ready to be bagged

We stopped at a local roadside stand for a snack, and our tour guide told us that it was owned by a former Viet Cong. Eric asked if it was weird for him to have Americans in the shop, and Nguyen answered “No, here in Vietnam we forgive and forget after the American war.” (The Vietnam war is called the American war here) So surprising, given that the Vietnam war still has such a strong and negative legacy in our country and that there was so much damage inflicted by us on their country as well.

After 30 km of riding, we arrived at the Cu Chi tunnels. With the bike tours, you go to the far side of the tunnels, less visited by foreign tourists, much quieter and more of the original size entry holes preserved. These were a large series of underground tunnels that the Viet Cong used to hide from and attack American troops during the war. They were so well hidden that Americans only found about a third of the tunnels, even after carpet bombing the area. The tunnels were all dug by hand, a vast network of 75 miles near Saigon, with exits popping up every five to ten meters or so. The tunnels have three layers to them, a top layer just below the ground, and then subsequent layers about 7-10 meters below the previous. There were booby traps in case American soldiers did make it through. Air vents were disguised as termite mounds, and the entrances were barely large enough for me to fit through. After crawling through them for 30 meters, my heart started to pound and fear took over. I’m not normally claustrophobic, but to be in a tight space in utter darkness…I don’t know how the VC were able to stay down there for weeks at a time.

Diorama of the tunnels at the site

Inside the tunnels, at the exit point. So cramped and tiny, even the girl had to stoop 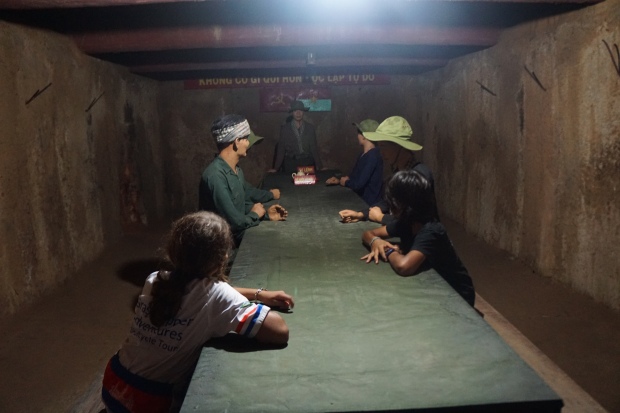 Creepy mannequin recreations of rooms under the tunnel, here’s a meeting house where the kids take part in a planning session

A lovely meal on the riverside after that, then back home to Saigon, and all in all a delightful day.