Ring! Ring! Went my alarm at four in the morning to reminding us to wake up. The reason that we were waking up so darn early was because at five in the morning a taxi driver would take us to Angor Wat to see the sunrise over the majestic temple. The night before we had packed all of our stuff up because at the end of the tour we would be moving to a new hotel. Soon we had all woken up and gotten in the car and drove away.

To get in to the Angkor Wat complex, you have to present your passport and give them some money to get in. But in our hasty last minute packing, Mom had forgotten to get the passports and her wallet out of the safe. We still got into the complex. Sadly, the clouds were out and we did not see the sunrise over Angkor Wat although we still did a tour of it. The temple was amazing! We gasped in wonder at every turn. One of my favorite parts was the bas-relief. My favorite one was the one depicting the Ramayana. The Ramayana is an epic where, a devoted sage dose many a ritual and sacrifice, goes mad and starts to cut off his 10 heads. When he is on his last head, Brahma (the Hindu god of creation) came down and said that he would grant him a wish. Ravana thought and decided that he would ask to be immortal. But not even a god can make one immortal so then he said that he wanted to be a super powerful being, that could not be destroyed by gods or demons. Then Ravana was reborn with all his heads and 20 arms that is how the Ramayana started. Then he became a big bully and finally Vishnu (the Hindu god of preservation) said “This must be stopped”. Then the gods came up with a plan. The plan was able to happen because of a flaw in Ravana’s wish. The flaw was that he had not wished that human and animals alike could kill him. Armed with this knowledge the gods devised a plan. The plan was that Vishnu would be born into a family and he would eventually kill Ravana. Thusly it began. Soon through a few trials and tribulations the young prince Rama and his partner/brother Lakshaman destroyed Ravana. The end. For more on the Ramayana go to Ramayana: The Divine loophole. (Also available as a book on Amazon)

Back to “temples! temples! temples!”. A few of the other amazing things about the temples is; one, this was before the Egyptians! And second is that the four way intersections at the Angkor Wat usually point directly North, South, West and East. After our stunning experience at the wonder of marvels temple we went to retrieve our passports. Also the breakfast server place gave us a take away breakfast. The next temple we went to was called the Ta Prohm temple. Unlike Angor What!?!? (our Angor joke) this temple had trees growing in and around it. The reason that Angor What?! had no trees was because (as many know) the roots can disrupt and overturn stone. But this temple was not a major attraction and the trees looked cool was probably why they did not remove the trees. This temple older too. Lastly, one quick fact is that tomb raider was filmed here.

The next and last temple we went to was called Bayon temple. This temple like the last, was Buddhist. Angkor Wat was for Vishnu. Two things I learned from the temple guide was that the four headed Buddha’s that were everywhere were showing four different expressions. Also closed eyed Buddha equals mediating to get to enlightenment, open eyed equals that he reached enlightenment. After this we went back home and crashed on the beds and went to sleep. The End. 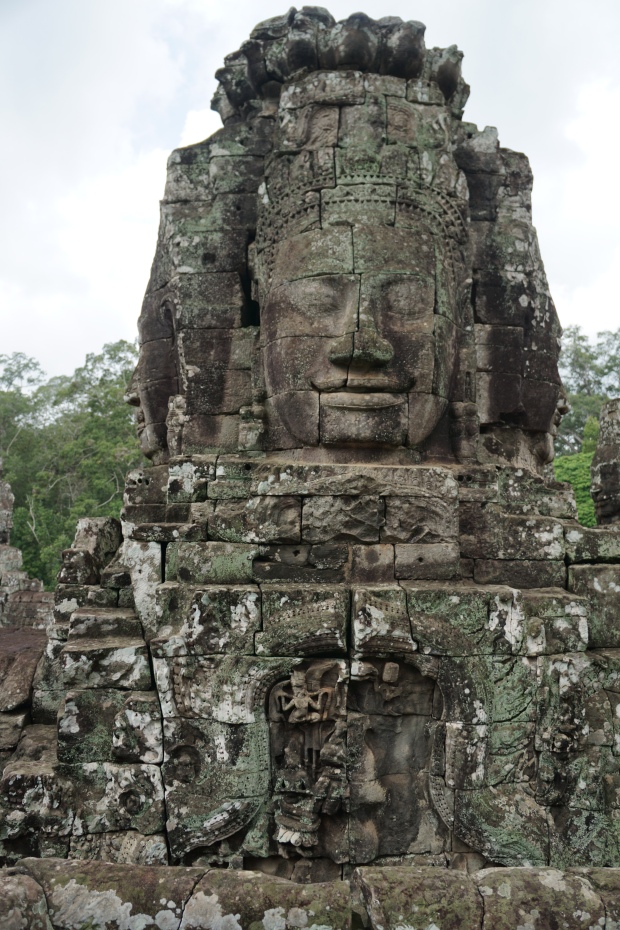