I only buy Bonne Marie jam or jelly only partly because the jam is quite tasty.  The real reason is that I think that those particular jars make nice drinking glasses. As a side benefit, it’s exactly a 4 oz. pour to the top of the bumps.

Now, I have been teased about my use of jam jars as wine glasses(*cough* susan *cough*), so I thought I’d try to dress them up a bit.  I saw a bit on glass etching in a recent issue of ReadyMade, and thought it would be perfect. The hardest part was figuring out exactly what to etch on them–I finally settled for “cheers” in different languages after seeing that done on glasses at cb2.

It took some looking to find letters that  wanted–not too cutesy, curly, or otherwise fancified.  A nice, solid font sticker. The crap that was actually in the glass etching section was all ugly as hell–stupid grape stencils or wedding motifs. Why do people think that “crafty” also means “chintzy”? I ended up using the “remarks” letter stickers in the “jfk neutral” series–a cool bold sans serif. I did feel some embarrassment at buying scrapbooking supplies, and ducked out of the store as quickly as possible.

I followed the instructions as in the article–first I spelled out the words, then bordered them with masking tape, then painted the entire inner area with glass etch.

As you can see, I wasn’t terribly particular about getting them exactly straight. This is partly because the children, who had been playing downstairs nicely at first, decided to come inspect what I was doing.  Since there are big letters warning of death if you touch the etching cream with your bare hands, I spent much of the time trying to get them to stay away and also to work as quickly as possible, so precision went by the wayside. The first one I did I only let the etching cream sit on for about 60 seconds and for the rest of them I let it sit on for a good 10 minutes, though I can’t say there’s any discernible difference between the two.  After rinsing them off, they looked like this:

Hmm…I think they look…okay…not amazing or anything.  But they are a bit more fun than plain jam jars and look pretty cool once they’re filled. I really like the idea, though I think it might look better on a smooth sided glass and if I do this again I’d make sure to put a much heavier layer of the etching cream on because these turned out a bit blotchy. Or maybe just do a design of polka dots or something… 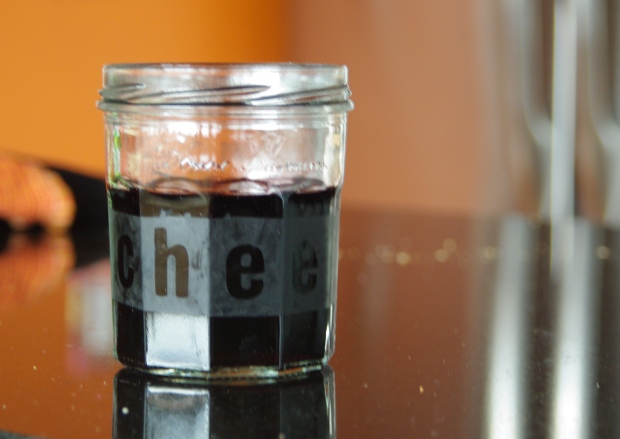 The family escaped unscathed from the close encounter with etching cream, and last I checked, the wine is still just as tasty. Cheers!