With this trip, I let go another one of my parenting tenets that was established before having children, which was “Children do not need to watch screens while on the plane.” Idiotic, really. Had I been wise, I would have plugged my kids in much sooner.  To this day I have NO idea how my parents managed to travel with small children to India without any assistive devices. I was incredibly happy to get out “How to Train Your Dragon” and plug both of our headsets in. You know, that is a very good movie, even if I did have to fast forward through a few scary parts and constantly shush the girl as she yelled out “TOOTHLESS!!” in joy, unable to hear how loud she was.

First stop once arriving in Brooklyn was getting froyo at Culture. I’m not sure that I’ll be able to eat froyo again, anywhere.  It’s that delicious. Bad foodie that I am, I did not take a picture.  I’m wondering if it actually happened.

The next day it was a bit rainy so we briefly braved the Brooklyn streets,

had a first (remembered) encounter with a subway train 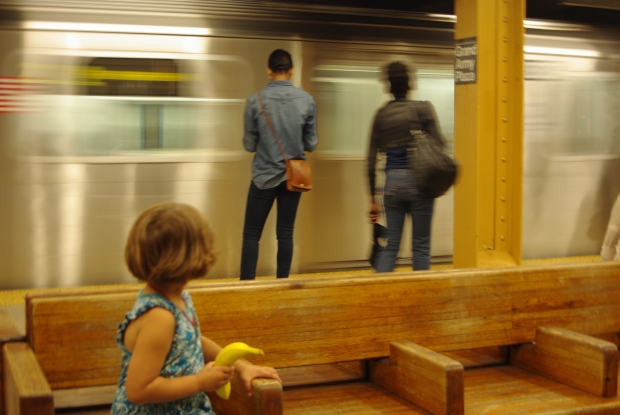 And then went to the Transit Museum. SO COOL. All about how the subway system was created and how it runs, though the girl mostly loved driving the buses.

My favorite part was the vintage subway trains they had downstairs, starting with above ground Brooklyn trollies from the late 1800s. The girl decided to use this time to pick her butt. 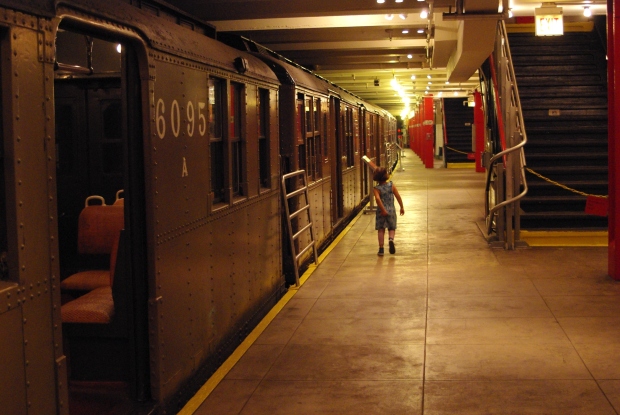 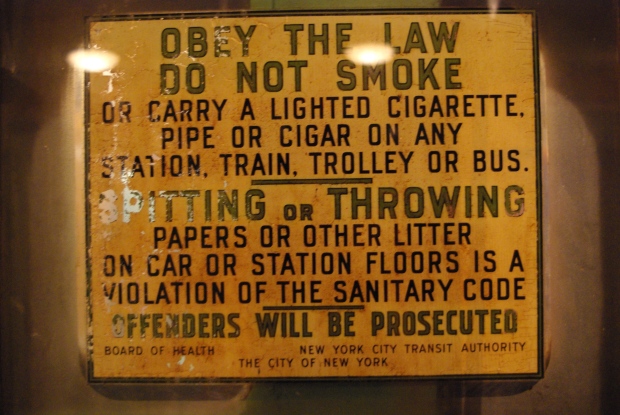 Still good advice, if you ask me.

We then hopped the subway to the Natural History Museum.  By this time the girl was an old hand at the trains and kept warning us to “Stay away from the yellow lines or you get squished!” Always the safety officer, that one.

I love seeing the dino skeletons.  It’s astonishing to me how incredibly huge they really are.  It steels my resolve not to go back too far should I ever happen upon a time machine without first going to the future and picking up a jet pack so I can escape quickly. Or an invisibility cloak.  That would work.  But they might have a good sense of smell, so the jet pack is still the better idea.

You know, one thing I forget about New York museums is that they are NOT friendly to little children.  I feel like the Denver museums make a real effort to have things be open to all kids and accessible, whereas the ones in New York seem to make a point of being more for adults, really–crowded halls, tiny dense print and few interactive features.

After that, we went to get Thai food and the girl had a huge meltdown, which should have been entirely expected given that we’d been traipsing around 2 boroughs for the entire day. Poor thing.  She recovered to her usual self and we headed back home and had an early bedtime, with plans to fit in a lot less the next day.